From Booking Through Thursday:

What is your earliest memory of a library? Who took you? Do you have you any funny/odd memories of the library?

My mother used to take me to the library. I remember it being a very long walk, across the iron bridges that crossed the railway, down an endless leafy street, through a park and past the milk depot. A really, really long walk for a child but one that planted a desire for books within me (like a thirsty man crawling across a desert towards an oasis, I knew that there was something worthwhile at the end of my trek).

I was always deposited in the children’s library as my mother disappeared into the main section. Left to my own devices, I would usually drift towards the work of Spike Milligan and Dr Seuss. I went for humour in those days and these were my favourites. My mother would, on returning to collect me, urge me to borrow the Just William books that she’s enjoyed in her childhood. I sometimes did, and enjoyed them too. My only other earliest memories are factual books, the inevitable dinosaurs and astronomy. I remember being particularly fond of one giant textbook entitled What Makes it Go.

Taught exemplary library manners, I would present my borrowing selection to the librarian (four at any one time I recall) all neatly opened at the correct page and ready for stamping. Other library etiquette, such as keeping quiet at all times, appears to have come to me instinctively. This seemed to put me in good stead as, ten years or so later, I applied for and was accepted as a Saturday assistant in the same library. I didn’t work in the children’s library, and was instead left to deal with the pensioners and their hardback mysteries, and the Dads of schoolmates who would sometimes recognise me. It was a pretty laid back job, although I always fell down on one thing. People returning their books late were subject to fines but I always felt awkward making them pay. People penalised to savouring their books just a little bit too long? It didn’t seem fair.

These days I’m a slave to Amazon. I visit a library only rarely and I sometimes feel a pang of guilt; I should browse and I should borrow. Although I suspect I would over-borrow, take too long to read and end up being fined. I did introduce my daughter to the library in her early years and admit being put off by the shelves of DVDs that have the habit of enticing children away from books. And because of this we now tend to treat our local Waterstones as library-ish. You can’t borrow, but you sure can spend a long time hiding in a corner and reading. 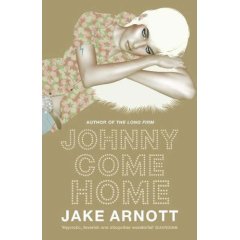 Anyone who occasionally looks at these pages may be aware that I feel bad about abandoning books. I feel a duty – however odd – to finish a book once I’ve started it. Probably wrongly, I often feel it’s something lacking in me when I give up on a book. I feel am unable to appreciate something that’s often very widely acclaimed, I’m just too dim to get it when everyone else has.

No Laughing Matter by Angus Wilson is a book that’s sat on my shelves for longer than I can remember. My yellow paperback copy has a inscription written by an old work friend (long since lost) who gave me the copy as a gift. Giving up on a book that I always meant to get round to makes the process all the more disheartening. The novel came back to my attention as it’s one that often turns up in top 100 lists. It’s one of Peter Boxall’s 1001 books before you die. It also turned up in last Saturday’s Guardian, named by several contemporary authors as the out of print book they’d love to see available again.

So what’s my problem? I found No Laughing Matter, like most of Wilson’s work, very difficult to get into. I also found it incredibly dated for a novel only written in 1967. Perhaps because it looks back on the period between the two world wars in its microscopic study of an English middle class family, although there are some similarities with Waugh – and I don’t find his work as dated. There are also echoes of Joyce, and it’s here – Wilson’s irritating experimentation – that led me to toss the book aside. I’m really sorry. But the hot weather at the moment inspires reading in the park beneath a shady tree – and I don’t want to spoil such rare perfect days curled up with a novel I can’t stand…

Picking books from must read lists often has this effect on me. It’s the same with films – and I wouldn’t want to be watching Citizen Kane on a sunny day either.

Browsing in a second hand bookshop, I overhead a customer making an unusual enquiry. She was looking for a set of encyclopedias – the old fashioned sort – because she’d seen such a set in a neighbour’s house and thought they looked very decorative. The assistant was sorry, but because they’d had a lot of people come in with similar enquiries they were out of sets of old fashioned books. She agreed that they could be highly decorative.

Perhaps I am a book snob. I have an oldish set of encyclopedias – probably early 1930s – but it’s boxed away safely somewhere because it’s so hideously out of date. The lady in the second hand bookshop put me in mind of a friend of a friend – and this is probably an urban myth – who walked into a shop and ordered a yard of books. She’d just had a new shelf put up, and a yard of books would fill it handsomely. Although I have seen similar yards in other people’s homes, pristine sets of Booker winners and the like – never opened. Each to their own.