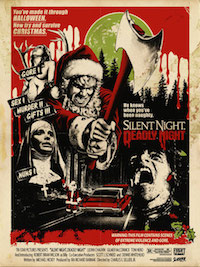 You can’t survive Christmas without a decent slasher movie. If you can find one.

Originally released in 1984, Silent Night, Deadly Night received an extremely negative reception. The film critics Siskel and Ebert piously condemned it as “sick, sleazy and mean spirited”, and large crowds gathered at cinemas in the US to protest against the film. TriStar Pictures, its original distributor, pulled all advertisements six days after release and it was withdrawn soon after. In the UK, Silent Night, Deadly Night was never submitted for certification and the UK DVD was not released until 2009. The film is also now available for purchase on iTunes.

So what makes Silent Night, Deadly Night one of the most controversial films of the 1980s? Earlier films with a similar premise had gone unnoticed, particularly the Christmas segment of Tales of the Crypt in 1972 where Joan Collins is greeted by a murderous Santa Claus and the 1980 film Christmas Evil. Perhaps it was the advertising campaign, particularly posters and television trailers, which made significant emphasis on the killer being dressed as Santa Claus. Siskel and Ebert, perhaps not the greatest champions of the horror genre, further drew on several of what they viewed as indecent scenes in the film. Disappointingly, Silent Night, Deadly Night is just a bad film opposed to the potential of a lost shocking horror that may have matured over the years.

Silent Night, Deadly Night is only fascinating because it is so typical of an American 80s horror film, and sits comfortably with the run of infamous video nasties earlier in the decade. The age of the film can be easily dated with the generic music and almost obligatory scenes of nudity. The only hint of originality is the use of some innocent Christmas songs in the soundtrack which can disturb in the uncomfortable reminder that this is a seasonal film. The scant plot follows Billy, disturbed as a child when his parents are killed by a murderous Santa Claus. He grows up in a Catholic run orphanage, which only serves to increase his latent mania further, and he eventually turns into a crazed killer himself after landing a job in a toy shop. Apart from some odd humour injected by Britt Leach as Mr Sims the toy shop manager, there’s a familiar pattern of gruesome killings to follow. The film follows the model of Halloween and Friday the 13th where we know the identity of the killer from the outset.

Incredibly, four sequels followed and a remake later appeared in 2012 known simply as Silent Night. This film mostly does its own thing around the hunt for another murderous Santa, although does copy two keys scenes of the original – where Billy is left alone with his catatonic grandfather, who bursts into insane life to warn him that Santa Claus is out to get him – and the later key scene where the adult and now murderous Billy impales a victim on a pair of wall mounted antlers. However there is no “Billy” as such in this version, and the identity of the killer remains a mystery until the end, where his identity is badly fudged. This time round, odd humour is provided by Malcolm McDowell as a questionably beyond retirement age police chief. McDowell utters meaningless pockets of wisdom like “don’t put any avocado on the burger” with a straight face, one of the few actors who can get through bad films with his reputation unscathed.

Silent Night is the better made film of the two, with at least some attention to detail. But the degree of bad taste is no more or no less, and the zero amount of controversy surrounding this film demonstrates how we are now numb to the extremes of the genre. Today’s equivalents of Siskel and Ebert are now just as likely to complain that horror films of this nature are full of cliches rather than contain anything of bad taste.

According to Wikipedia, Silent Night made only $14,000 at the box office. The original has made 2.5 million to date. Go figure.