By 1976 Hayley Mills had travelled far since 1961 and The Parent Trap. After her contract with Disney ended, she was eager to explore more challenging film roles to escape, or at least contrast to, her girl next door image. She turned down Stanley Kubrick’s version of Lolita in 1962, which is unfortunate as she would have been great, but the interesting parts eventually began with Sky West and Crooked (1965), known as Gypsy Girl in the US. It was directed by her father John and she played a troubled girl who is taken in by a band of gypsies.

The Family Way (1966) followed, where she starred together with Hywel Bennett as a young couple unable to consummate their marriage. Roy Boulting directed, who would later marry Mills. She also paired with Bennett in Twisted Nerve (1968), a psychological thriller about a man who pretends to be something he’s not; an often used theme in literature and film. They also both appeared in an adaption of Agatha Christie’s Endless Night (1972) as a young couple who build their dream home on cursed land; a film with an excellent twist and an effectively subtle supernatural element.

In Deadly Strangers (1976) Hayley Mills was paired with a similar actor to Hywel Bennett who was skilled in feckless roles, Simon Ward. Deadly Strangers was regular Saturday night TV viewing during the early 1980s. It was always on, in my rose-tinted memory usually following the latest episode of Hammer House of Horror on ITV. 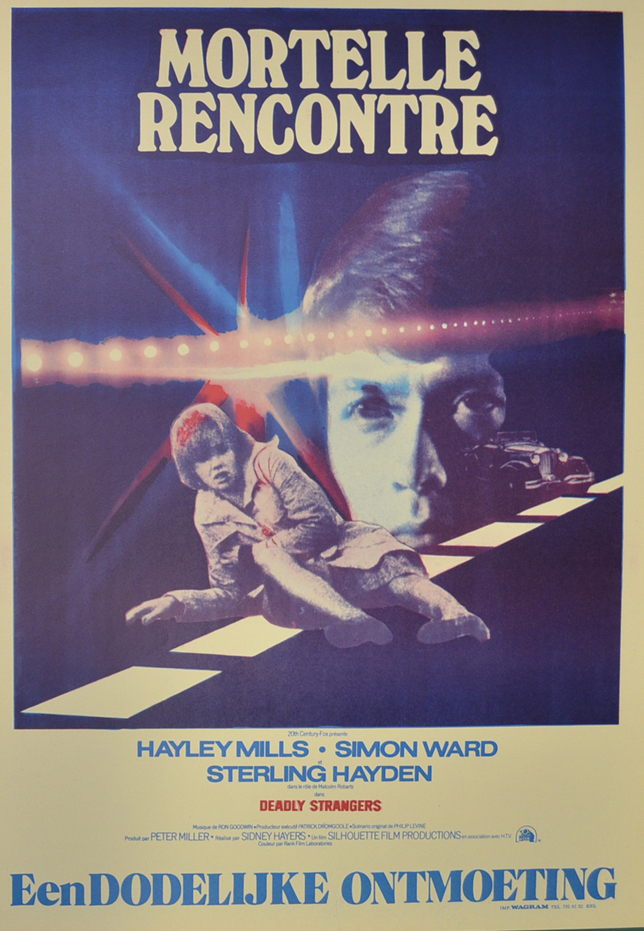 Deadly Strangers has an almost brutally frank premise and follows the escaped maniac on the loose film blueprint, playing out across cold and bleak British A-roads. Naturally, the identity of the escapee is not revealed, with the audience left to decide between the two leads who it might be.

Steven Slade (Ward) picks up Belle Adams (Mills), a hitchhiker abandoned at the roadside by a lecherous lorry driver. Although Steven is very odd, possibly drunk and not sure where he’s heading, Belle still goes with him. He deliberately allows Belle to miss a train so they can stay together.

Steven and Belle have several edgy encounters, including a run-in with two motorcyclists, and a petrol station assistant is brutally attacked by another unseen assailant. There are flashback scenes setting out both their backgrounds, giving the viewer just enough clues. They become separated and Belle briefly travels with a romantic older American gentleman, wonderfully played by Sterling Hayden. The Hayden character is pivotal to the film, providing a comic book foil to Belle.

The quality of Deadly Strangers feels low budget and drab, as if the colour has been drained from it. It’s raining throughout most of the film and 1976 Britain looks grim; all greasy cafes before the dawn of the motorway service station. Deadly Strangers features no motorways at all, the smaller roads menaced by dangerous lorry drivers and cocky bikers, and cars held up at roadblocks and quaint railway crossings. Shooting was in the Bristol area, although the only recognisable location used is the Weston-super-Mare pier. The music is by Ron Goodwin. Although excellent, it feels like it belongs to a different type of suspense film from an earlier era.

Deadly Strangers isn’t subtle in suggesting that Steven is the maniac on the loose; to the point when it really can’t be him and it can only be Belle. So the eventual twist ending might appear obvious to today’s seasoned viewer, although it is still expertly done and the revelation hangs on an unwittingly folded newspaper headline. A clever Hitchcockian touch in the final act.

But the strength of the film is in its performances. Mills and Ward are both brilliant and make it such an endearing watch. Smoking constantly throughout, Mills is seen briefly topless in one scene, doing all she can to shed her goody-goody image. Time Out described her best quality in this role as “an insolent, slightly offhand sex appeal”. Reading insolent as bold, disrespectful, barefaced or shameless – this is a fair description of Belle Adams, although she still remains likeable. And disturbingly the viewer does turn in to something of a voyeur when it comes to Belle. In the unsettling scene where Steven watches her undress through a hole in the wall, we watch with him.

Simon Ward convinces in the tricky role of Steven Slade and is a worthy successor to Hywel Bennett as Mills’ screen partner, but it’s difficult to find him cast as imaginatively elsewhere. There is no pattern to his career choices and his only later film of note was The Monster Club (1980).

Strangely, Hayley Mills dipped out of cinema for a few years following the release of Deadly Strangers. She was on the brink of even more interesting roles, but perhaps she was satisfied that she’d done her job in reinventing herself. The girl next door had gone. It might not have been a good move to push things any further anyway, at a point where we could still appreciate the contrast of her earlier films and keep enjoying Whistle Down the Wind from 1961.