This year the BBC offered a rare treat for M.R. James fans with a new adaptation of Whistle and I’ll Come to You. As a student of the ghost story genre I was very satisfied with the film although I suspect that many a die hard James devotee was left disappointed. The 2010 version was really M.R. James in name only, with many changes to the original short story. Most of the similarities I picked up were with Jonathan Miller’s 1968 film, taking the chilling image of an indistinct figure on a deserted beach as its key terrifying motif. 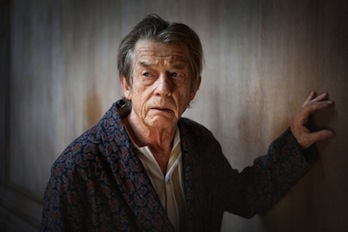 Whistle and I’ll Come to You 2010 was frustrating for me as I watched it with a small family audience. Confused by the subtleties of the storyline they turned to me for an explanation as an apparent expert on James. As the original had been changed so much I couldn’t provide one. They expected answers from an often vague and ultimately open ended film. They turned their confusion and dissatisfaction towards me.

However, now given time to digest both this and my Christmas overindulgence I’ve concluded that this was indeed an excellent adaptation. John Hurt plays Parkin, portrayed so well in 1968 by Michael Hordern, although Hurt added an extra layer of pitiful terror to the man. Parkin 2010 leaves his ailing wife in a rest home and visits a hotel by the sea for a few days contemplation and rest. A bleak and empty establishment where Parkin learns he is the only guest. Walking on the beach he discovers – not a whistle – but a wedding ring with the engraving “who is this who is coming?” Following the discovery, Parkin is troubled by something; the indistinct figure on the beach, a scratching under his bed at night, the rattling of the door…

Writer Neil Cross takes many liberties in bringing this 1905 story up to date, although I found it an absorbing study of age, death and the real purpose of the supernatural. Coming to terms with his haunting, Parkin remarks that more terrifying than ghosts is the living shell of a human being, suggesting that the wife he has left behind is the most chilling reality in his world. The closing scenes, where Parkin fails to keep out what’s rattling at his hotel door, are genuinely frightening. I’ll remember this film for a long time.

So highly recommended, but you must put your yellowing Ghost Stories of an Antiquary to one side and enjoy this for what it is; a film that takes only the smallest ingredient of James, a dashing of Miller, but employs the ever reliable Hurt to deliver something of real quality.

I’ll try to avoid spoilers in case anyone who reads this hasn’t seen the programme. I thought it was worth seeing and had some good scares (although it wasn’t clear why the original knocking on the door would alarm Parkin so much). However, it wasn’t the M R James story, and the ending made no sense to me. I understood what happened, but not why. It just seemed wrong, because the spirit or spectre would have no reason – as far as I can see – to do what it did.

I think I would need to see it again to articulate what really happened and why. And first give myself some time to wind down from my self generated Christmas M.R. James excitement.