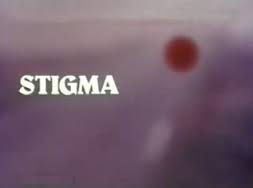 Stigma was the BBC’s 1977 Ghost Story for Christmas offering. This was a radical departure for the series with a new story by Clive Exton in a contemporary setting. The only link with the previous films is director Laurence Gordon-Clark, who explains in a DVD extra from the 2012 box set that the production team had exhausted all further options of M.R. James adaptations for budgetary reasons and hence looked towards new material. Stigma is often ignored and I’m not aware of it ever being repeated since the original transmission. I’ve had mixed feelings about the contemporary Christmas films (one more was to follow in 1978) and tended to ignore them myself. Stigma turns out to be a clever and disturbing piece.

The 70s saw some bleak contemporary dramas, and many of the most memorable tended to involve menacing stone circles. Children of the Stones was a terrifying ITV children’s series from 1976, involving silent stones encroached upon by the modern world of motorways and ring roads. Three years later, the 1979 update of the long standing Quatermass depicted a society running down, with the Planet People, those who had rejected the modern world, drawn to the enchanting stone circle Ringstone Round. I’ve since been reminded of Alan Garner’s The Owl Service which was televised in 1969. Stigma is by far the least known of all of these but possibly the best effective drama of the three,

Full of subtle imagery, Stigma is a tale of blood, with the colour red running right through it. In the country cottage owned by Peter and Katherine, where they live with daughter Verity, there is blood red lingering from the glossy red front door of the house, through deep crimson nail varnish to a mouth watering red joint of beef – the colours seep through the film. Apart from this, Stigma is particularly understated – some snatches of Mother’s Little Helper and a glimpse of Their Satanic Majesties Request (Rolling Stones – geddit?) notwithstanding, there is no soundtrack at all.

The film is just half an hour long so it’s quick in execution. Arriving home, Katherine and Verity observe two workmen as they attempt to remove a huge stone from their garden, part of Peter’s plans to extend the path from the cottage. Beyond, in the next field, other stones linger eerily. A gush of wind breezes over Katherine. The stone is only partly shifted, and what follows is a horrible descent into her demise as she begins to slowly bleed. Peter arrives home but is oblivious to her plight, only noticing red wine on her dress. At least the beef is delicious. Verity remains an ambiguous presence to the end.

The cast is excellent. A prior To the Manor Born Peter Bowles, reminds what a decent actor he is, and Kate Binchy and Maxine Gordon as Katherine and Verity are also superb. What’s most effective about Stigma is Katherine’s attempt to hide the developing catastrophe, and her frantic efforts to do so are extremely effective. Binchy is very convincing in the role. But perhaps too much so – Stigma may not have been well received at the time because it strays far into the horror genre (I’ve filed it as such) much more than the fireside, port sipping territory of M.R.James. This is a shame, and maybe being produced independently from A Ghost Story for Christmas would have given it a greater legacy.

I’ve been writing annual reviews of A Ghost Story for Christmas for eight Christmases now. This is perplexing as the original series also ran for eight years and I’m yet to review the last – The Ice House. Spooky. 2013 sees another revival, with Mark Gatiss’s version of The Tractate Middoth. I’m really looking forward to it. Long may the series live.