Titles can be misleading. There are films that deal with alien menace and others that look at issues much closer to home, exploring where people think they belong and where they actually find themselves. Can humanity survive on hope alone?

Monsters is one of those films that I didn’t really “get” until about half an hour before the end. This is the moment where you pull your chair a little closer to the screen and curse yourself for not appreciating it a lot more. Gareth Edwards’ film has received much praise and is certainly well worth a look. It’s also attracted attention for its tiny budget and has also had comparisons made with District 9. The latter is somewhat unfair. Whilst District 9 is a superior film, Monsters only has minor similarities and reminds of countless other science fiction movies (most notably Close Encounters). 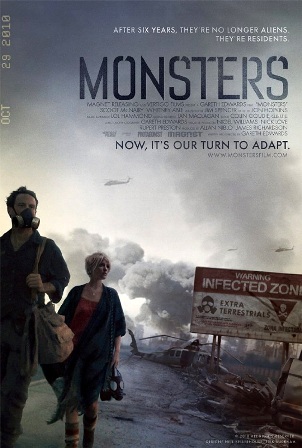 A probe containing alien life samples crashes over Central America. Over the following years, new life forms begin to appear with most of Mexico subsequently quarantined as an “infected zone”. Monsters follows an American photographer Scoot (Andrew Kaulder) who agrees to escort lost tourist Whitney (Samantha Wynden) across Mexico to the US border. What could be sold as a typical gung-ho monster movie is as far removed from this description as possible. Edwards is skilled at depicting the danger surrounding Scoot and Whitney’s plight as they attempt to escape a dark and hazardous environment.

I’ve mentioned District 9 and Monsters recycles the premise where the viewer takes it as read that an alien menace is a given. Both films avoid any lengthy preamble to explain how the human/alien coexistence has arisen. We just accept that it has become uncomfortable. Both explore the alien entity as an accidental invader. There’s also a heavy Spielberg influence in Monsters. Problems of communication between humans (speaker of different languages thrown together), the sheer awe of the aliens in the eyes of our protagonists and the lurking menace of the aliens (Spielberg’s adaption of War of the Worlds). There’s also aspects of many a post apocalyptic film, a recent comparison being the cinema treatment of Cormac McCarthy’s The Road (although I think that The Road failed as a film).

Monsters is incredibly tense, mostly down to the aliens (huge, tentacled octopus-like creatures) being mostly off screen until the end. Instead we glimpse them during brief television news footage or as part of graffiti on abandoned buildings and only see the devastation they leave behind them. One of the more chilling parts of the film is when Scoot discovers an alien “nest” on the base of a tree in a forest, however the most frightening elements are all man made. The enormous wall built around the US to keep out the infection and the edgy military presence depicted by screeching low flying jets.

The film really comes into its own towards the end when Scoot and Whitney reach the US border and realise that safety isn’t quite as close as they’d have hoped. But when it arrives, are they really ready for it? My only criticism is the abrupt ending. By then I was gripped and wanted more. But this is unusual, unexpected and ultimately moving. Monsters is certainly recommended.