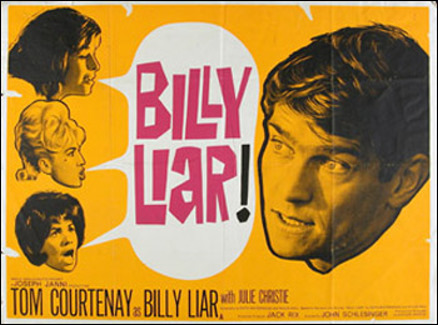 Billy Liar came back into my orbit when the BBC screened their recent Up North season. Their excellent documentary on early 60s British cinema featured the usual, welcome, suspects of A Taste of Honey, Saturday Night and Sunday Morning, A Kind of Loving and Billy Liar. The last two were directed by John Schlesinger in 1962 and 1963 respectively. A Kind of Loving is one of my favourite films, a typical kitchen sink drama of the period but elevated by the captivating lead performance of Alan Bates. Billy Liar, starring Tom Courtenay, is equally terrific but for different reasons.

Billy Liar is a film dealing with flights of fancy; the life of a young man who lets his imagination get the better of him. Cheat, fool, wastrel, or simply liar. Permanently late for work, tying everyone in knots with his perpetual fibbing (“you told that woman down the fish shop that I had me leg off”, moans his father, “do I look like I’ve had me leg off?”) and general larking about. Tom Courtenay handles a difficult role admirably. I say difficult because a lesser actor would make him irritating, and Courtenay restrains himself enough to make Billy sympathetic. The role was originally played on stage by Albert Finney and it’s difficult to imagine him in the part; Finney’s a little too thick set and tough looking, whereas Courtenay does have that juvenile look about him. That’s not to say the Finney is a lesser actor, he’s just not Billy Fisher.

There’s plenty of fine performances in this film, especially the female characters. Billy’s mother (Mona Wasbourne) and grandmother (Ethel Griffies) represent the older generation with Barbara (Helen Fraser) and Rita (Gwendolyn Watts) are permanently wet and permanently shrieking in turn as the younger. Then there’s Julie Christie, perfect in the role of Liz, who only succeeds in sparking any kind of life in him. Billy’s dreams of achieving his ambition of becoming a comedy script writer in London for the excruciating Danny Boon (Leslie Randall) are realised via Liz. Almost.

Watching Billy Liar again for the first time in two decades or so, I was struck by how the effectiveness of the film’s ending hasn’t blunted at all. This is the inevitable closing scenes, where Billy deliberately misses the train that’s about to take him and Liz away to excitement, riches and a conventional happy ending. But Billy Liar resorts to its monochrome realism; tugged by the reality of his grandmother’s death and a family crisis he falls back into the persona of the dreamer and slopes home to his bedroom.

John Schlesinger’s direction is also worthy of a mention. Watching this on wide screen (the Studio Canal DVD I own is very good quality although annoyingly there are no extra features) I was struck by how beautifully photographed it is. Schlesinger also makes wonderful use of open space, especially the scene with Billy and Barbara in the enormous graveyard, the huge Victorian crypts speaking for themselves in metaphor. Most effectively was how he films the background to 60s life, a mix of demolition sites and newly minted tower blocks. And how he lovingly films Christie, a find for him after she’d only previously appeared in a couple of minor films (things like Crooks Anonymous with Leslie Phillips and Stanley Baxter in 1962).

Although he never again reached the heights of A Kind of Loving and Billy Liar, John Schlesinger did direct several more notable films. He worked with Julie Christie again in both Darling (1965) and Far From the Madding Crowd (1967). From there he delivered a run of eclectic films until his death in 2003, the best in my opinion being Midnight Cowboy (1969) and the unjustly forgotten The Day of the Locust (1975).

Billy Liar is a classic period piece and the best film of British 60s cinema. Although so rich in acting talent (I’ve neglected to mention Rodney Bewes and George Innes as Billy’s work pals) two performances deserve an extra special highlight. Firstly Wilfred Pickles is brilliant as Billy’s permanently aggravated father, and his exasperation provides the film with its best comedy. But best of all is Leonard Rossiter as Billy’s boss Mr Shadrack, where – if you look closely – you may see the seed of the performances he gave a decade and a half later as Rigsby in Rising Damp. Sheer genius.

Billy’s home was Hillcrest Midland Road, Baildon.
http://goo.gl/maps/wglSj
But in the final scene with imaginary army, he was filmed walking up Spennithorne Avenue, West Park, Leeds 16
http://goo.gl/maps/DXRKG
then edited for his final approach to Hillcrest.