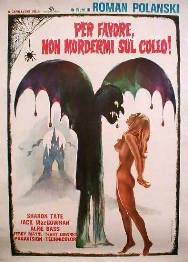 A cinematic treat for Hallowe’en. Dance of the Vampires.

Dance of the Vampires is a film that often graces the Christmas tv schedules, its elements of fairy tale, horror and offbeat comedy making particularly welcome viewing at that time of year. But it’s also a film that’s recently slipped into obscurity, being unfairly called a horror spoof where it is a far superior piece of cinema compared to the Hammer output of the time, outranking them in sheer quality of acting, costume and set design, script and music.

Perhaps it isn’t so odd that the film has failed to find a secure footing in the horror canon. When it was first released in 1967 director, co-screenwriter and star Roman Polanski disowned the film. The original title was changed to The Fearless Vampire Killers, or Pardon Me, Your Teeth are in my Neck for the US release and this version was rather brutally cut. To make matters worse the original trailers for the film market it along similar lines to Carry on Screaming from the same era. Movie posters from around the world also sell the film as anything from soft porn vampirism (pictured, and Sharon Tate went a little way to embellish this with her on set Playboy shots) to something quite cartoonish (unfortunately the most recent DVD release plumps for the latter). So sadly Dance of the Vampires has hung around as a somewhat doomed affair, misfiled in the annals of film and unjustly ignored.

Dance of the Vampires was filmed in 1966 at the height of Hammer’s success. The same year saw the release of Frankenstein Created Woman and Dracula Prince of Darkness, arguably two of the studio’s finest films. Although however much I admire these films I still think that Dance of the Vampires towers above them. Firstly it’s the breathtaking quality of the film. Polanski is a gifted director and it is well paced, thoughtful and technically faultless. The set design is outstanding, in particular the interior of the vampire castle where the slightly claustrophobic feeling invites a comparison with how the director captured the inside of the Dakota in New York for Rosemary’s Baby which followed a year later.

The wonderful soundtrack is by Krzysztof Komeda, who composed the music for Rosemary’s Baby and Polanski’s earlier film Cul-de-Sac. Sadly Komeda was to die in 1969 and Roman’s subsequent films all miss his added value. Dance of the Vampires has one of the all time great movie soundtracks, entirely fitting for the subject matter. The opening theme places the viewer directly into the fairy tale landscape of the film and continues to haunt throughout.

And it’s the haunting nature of the fairy tale that works so well in its favour, superbly written by Polanski and his usual collaborator at the time Gerald Brach. The film opens with Jack MacGowran and Polanski as two inefficient vampire hunters. MacGowran is superb as the elderly Professor Abronsius, bringing a new level to eccentricity to the sphere of vampirism. He’s a rather endearing character, his eyes lighting up when he asks the locals “is there a castle in the district?” He’s even more delighted by the news that, when visiting the said castle, he discovers an extensive library – and dances with delight. Polanski is Alfred, his assistant. He’s a rather shy young man who attempts to woo the object of his affection Sarah (Sharon Tate) by building snowmen. When given the opportunity to kill the sleeping Count von Krolock (Ferdy Mayne) in his crypt he chickens out, hinting that events may lead to a particularly downbeat conclusion.

Snow features prominently in the film. The Professor and Alfred embark on a Beatlesque ski ride and later clamber over the snow covered castle battlements. In a memorable scene, Sarah is perplexed when the bubbles in her bath turn to snow. She looks up to find von Krolock descending from above to abduct her. There are many such touches resulting from Polanski’s imagination and the luxury of a large budget (indeed, this was his first colour film and he chose to make it in anamorphic format, filming on location in The Alps). The set design is finely detailed, right down to the coachwork on the castle doors and the decaying cobwebs. The vampire dance itself, which comes at the end of the film, is a brilliant work of choreography. Even Leslie Halliwell, normally dismissive of this kind of picture from this era, had to admit it was impressive.

Polanski makes a rare appearance in one of his own films. His other substantial role being the Tenant (1976) . He is a great and little used actor, although Jack MacGowran undoubtedly gives the best performance in Dance of the Vampires. MacGowran was something of a Polanski regular in the late 60s. He’d appeared as the ill-fated Albie in Cul-de-Sac and was later to feature in arguably the most obscure entry into the Polanski canon, A Day at the Beach (1970), a film produced and scripted by Polanski which subsequently vanished for several decades. He also starred in the Gerald Brach scripted and George Harrison scored Wonderwall (1968), his only proper starring role. MacGowran, an interpreter of Samuel Beckett – there’s a splendid tv version of Eh, Joe? – is now sadly forgotten.

Alfie Bass adds some knockabout comedy as Sarah’s father, Shagal the innkeeper. Becoming a vampire himself, he laughs off attempts to repel him with a crucifix – “you’ve got the wrong vampire” – as he is of the Jewish persuasion. Although he doesn’t have a great deal to do Ferdy Mayne is an impressive count, whilst Iain Quarrier plays his homosexual son. Perhaps this is one of the first gay vampires in cinema. The boxer Terry Downes appears as the silent and grotesque hunchback Koukol and it’s to his credit that he doesn’t make this character too absurd. And we mustn’t forget Sharon Tate. It’s well documented that Polanski fell in love with her during the making of this film (there’s a tiny clue in the opening credits). Although Tate’s appearances are really only fleeting, she radiates a rare and captivating beauty. It would have been a lesser piece of work without her.

Seeing the film again I was impressed by how stunning it looks in widescreen. It’s infinitely superior to the various tv versions and I can understand the director’s fury over its initial treatment. Apart from the look and charm of the film the other satisfying element of Dance of the Vampires is that the bad guys win. By travelling into the heart of Transylvania to stamp out vampirism, the inept Alfred and the Professor instead fail and succeed in ferrying it back with them to the modern world. In the comfortable world of Hammer that would never happen.

Nice article on VAMPIRE KILLERS. Polanski only disowned the US version; Martin Ransohoff not only recut it but dubbed MacGowran’s and Polanski’s voices. It was a huge hit in Europe. Polanksi wrote it especially for MacGowran. (My biography, THE BECKETT ACTOR, was published in 1987).

Thanks for your comment – I’ll look out for the book.