The way she shuts the door, there’s always a squeak. She can never keep it quiet enough. She gets in first.

“Your question is a little too abstract,” I say. “Ask me another.”

“Who replaced Brian Jones in the Rolling Stones?”

Eh? Bugger. She’s wrong-footed me. Mick Taylor, I think, but I don’t answer. She doesn’t know Mick Taylor. Nobody knows Mick Taylor. The Pointless answer from the Stones. Perhaps she has taken this from Pointless. I should get this over with.

“Brilliant,” she says. “Right answer. The answer to what, if you were wondering. Well, I estimate that it’s around five and twenty to eleven.”

Five and twenty. An old fashioned way of telling the time. Grandfathers and their clocks. Just to wind me up.

There is no clock out here. Too readily confronting her in the hallway with no evidence to back me up.

“Because I know that it’s after ten thirty, which is why I knew you were going to ask.”

“And I knew what what meant.”

She’s trying not to smile. We’re funny together.

I know who Benedict Cumberbatch is. But I like to be flippant with her. Not a very grown-up thing to be doing.

His pain was so great that he could no longer struggle or move at all, except his head turned briefly in my direction, and his eyes (horror-filled) met mine.

Book choice is Lincoln in the Bardo by George Saunders. Winner of the 2017 Booker Prize, I wasn’t expecting this to be a Halloween read but it has suited this afternoon perfectly and I am already halfway through. A very original ghost story.

TV choice is Stranger Things. Back for the second series and – again – I am halfway through. The Halloween episode is brilliant.

Song choices are Drayton Manored by Sleaford Mods and Disco Creep by Nachthexen. I saw both bands live recently and these two tracks are seasonally fitting.

Halloween picks. It’s good to be back. 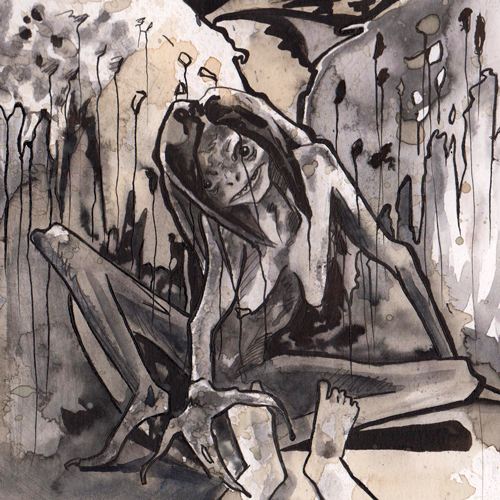 This October the perfect read was Thin Air by Michelle Paver. I have been looking forward to this as Paver’s Dark Matter is my favourite supernatural novel from the last few years. Paver is carving her own genre in tales of isolation, fear and possible madness and Thin Air follows a mountain expedition in 1935 where the altitude has a disturbing effect on the tale’s narrator. Highly recommended.

This October the perfect listen was The No Sleep Podcast. Broadcasting since 2011, and now in season 8, I have slowly been working my way back through this and previous seasons. Each episode typically features one or more stories, all read from a first person perspective. Effects and musical background is low key, and so the listener is treated to a traditional approach to storytelling. Think of campside tales, or radio broadcasts before the genre was swamped by film.

Standout stories for me so far are:
Her Last Call written by S.H. Cooper and performed by Jessica McEvoy & Addison Peacock & Nichole Goodnight & Alexis Bristowe. A tale of bullying and featuring a disturbing Lady Gaga ringtone.

YUSDABEE written by Richard Jenkins & Amelia Hammal and performed by Erika Sanderson, concerning a post apocalyptic alternative London. Sanderson is my favourite narrator from the stories I’ve listened to so far.

The particular standout however was Stories for my Daughter written by J.M.Kendrick and performed by Erika Sanderson and David Ault, which is the perfect halloween short story. It is intriguing, chilling and moving.

Tonight I will be listening to The No Sleep Podcast Halloween edition, and reading The Travelling Bag and Other Ghostly Stories by Susan Hill. Happy Halloween.

The first of two halloween posts this year.

In 1964 Albert Finney worked again with the director Karel Reisz on Night Must Fall, following their first collaboration four years previously on Saturday Night and Sunday Morning. Crucially the films bear no comparison at all, Finney proving his versatility and determination not to be typecast into any particular role or acting style.

The tag line for many of Night Must Fall’s original posters reads “the lusty bawling star of Tom Jones goes psycho”, so while audiences weren’t allowed to forget Finney’s most recent success, they were also enticed into seeing the new movie idol in a more controversial role. Hitchcock’s Psycho obviously still very much in the public consciousness at the time, the film’s marketing must have suggested that Finney was exploring Norman Bates territory.

If Wikipedia is anything to go by, Finney was one of the top ten box office stars at the time, so this film was a bold move for the actor who turned down Lawrence of Arabia. But unfortunately Night Must Fall was not a success and is mostly forgotten, perhaps the least remembered film of an actor who starred in comparatively few films anyway (indeed, Night Must Fall was only his fourth film and he chose to give the cinema a rest for three years after this, returning in 1967 with the equally odd Charlie Bubbles).

Night Must Fall is a remake of an even lesser known 1937 film of the same name, which was in turn based on the 1935 play by Emlyn Williams. With Reisz directing from a script by Clive Exton (who also wrote the screenplay for 10 Rillington Place) and with Finney as producer, it also stars Mona Washbourne, Susan Hampshire and Sheila Hancock. The film was entered into the 14th Berlin International Film Festival. The excellent black and white cinematography is by Freddie Francis, and whilst some of the acting is decidedly (and deliberately) offbeat, if you can find a good print of the film it looks amazing.

Finney is the centrepiece as Danny, an odd young man who charms his way into the house of an apparent invalid Mrs Bramson (Washbourne) and her daughter Olivia (Hampshire) via his girlfriend, their housekeeper Dora (Hancock). Affecting a Welsh accent, Finney is determined to pull out all of the acting stops from the beginning and succeeds in delivering quite a mesmerising performance. He makes it no secret he’s unhinged, and there’s no secret either that the brutal murder that forms the backdrop of the story is his responsibility. Going back to the Psycho comparisons, little is shown in terms of violence or bloodbath and brutal murder wise most is left to the imagination. Worming his way into her affections, Mrs Bramson allows Danny to call her “mother”, which leads to her downfall. So also, like Bates, Danny does appear to have parental issues that have led to his outlook on life, although it’s much more subtle here. And there’s many a quietly handled and telling scene; watch out for the “puzzle hand”.

Thinking about Night Must Fall and the period it was made, I’m inclined to place it somewhere between The Servant (1963) and The Collector (1965). The Servant because there are some similarities visually, there is the depiction of weird childish game playing, and the exploration of a class theme (although Danny’s wish to rise a social class is less explicit than Dirk Bogarde’s Barrett). The Collector because it was another film with American backing that placed a young British star (Terence Stamp) in a very peculiar and shockingly non-starry role. The Collector is a better and more convincing film in my view (and it also features Mona Washbourne) but Night Must Fall is still essential viewing.

Karel Reisz went on to direct Morgan: A Suitable Case for Treatment in 1966 which (along with Saturday Night and Sunday Morning) is a far more celebrated 60s film. Looking through Finney’s subsequent roles, I can’t really see anything he did that stands out in a way that Danny does. I’m willing to be challenged on this, but mostly he seems to have succeeded in his wish not to be pinned down in any way after his early success, moving between musical (Scrooge in 1970), detective (as the original Poirot in 1974’s Murder on the Orient Express) and horror (Wolfen in 1980) genres. And most recently James Bond: he’s the best thing in 2012’s otherwise dire Skyfall.

Siouxsie and the Banshees – Spellbound

The classic John McGeogh guitar. From the 1981 album Ju Ju.