Although Boris Karloff enjoyed a very long career as an actor, it’s interesting that two of his best films came at the end of his life. At the age of almost eighty, he appeared in Michael Reeves’ The Sorcerers (1967) and Peter Bogdanovitch’s Targets (1968). A passable third late classic Karloff is also the quite mad but marvellous I tre volti della paura (Black Sabbath) from 1963. 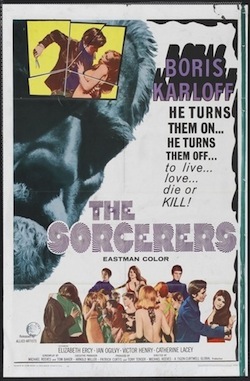 Neither Targets or Black Sabbath are ever shown these days, but I’m choosing to celebrate the more widely available The Sorcerers. It’s a favourite of mine because it gives a fascinating view of “swinging” London at the time and is directed by Michael Reeves, also responsible for Witchfinder General and whose career ended suddenly with his death in 1969.

The Sorcerers is fairly low budget, many of its scenes set in the interior of an unconvincing nightclub, where our leads look very bored and drink bottle after bottle of flat looking coke. The film also harks back to an era where detectives smoked pipes indoors and drove at dangerous speeds in Black Marias. Although 1967 spells Eastman colour so this is interesting as Karloff is usually recalled from his monochrome days.

Karloff plays Professor Marcus Monserrat, a hypnotist of sorts, who lives with his excitable wife Estelle (Catherine Lacey). They are searching for a young person to experiment on with their thought experiments which are controlled via some mind bending machinery and vivid light displays that would have no doubt excited the members of the early Pink Floyd. Indeed, the film is quick to expose the callowness of youth in the person of Mike Roscoe (Ian Ogilvy). Mike hangs out with Nicole (Elizabeth Ercy) and Alan (Victor Henry), it obvious fairly early that three is a bit of a crowd. Monserrat approaches Mike in a Wimpy bar, taking him home to try a little hypnotic experiment. From here things go swiftly and steadily wrong.

At first the sorcerers indulge in quaint little attempts at mind control; Mike breaks an egg and they experience the feeling by proxy of the cold yolk in their own hands. The experiments become increasingly more risky; stealing a fur coat, a high speed motorbike ride (without helmets) and a fight. Inevitably, the Monserrats and their puppetry lead to a murder or two (with one of the victims a young Susan George).

The best thing in The Sorcerers is Catherine Lacey, who is increasingly chilling as Estelle as she pushes the experiment further than envisaged and eventually overcomes the mostly benign Monserrat. Poor old chap, it wasn’t really what he’d bargained for.

A minor gem of a movie. Michael Reeves also directed La sorella di Satana (The She Beast) in 1965 which starred Barbara Steele and again the long suffering Ian Ogilvy. Reeves was also hooked up to work with Christopher Lee and Vincent Price on The Oblong Box (1969) but sadly it wasn’t to be.