There’s a school of thought that places On Her Majesty’s Secret Service at the very top of the James Bond canon. The 1969 film is now slowly creeping into wider acceptance following the long vilification of George Lazenby’s performance. OHMSS has its flaws, but I’m beginning to agree that it’s the best of the series. There’s some excellent action scenes, mostly involving snow – there’s ski chases, an avalanche and a fight on a bobsleigh. There’s a good Ernst Stavro Blofeld in the shape of Telly Savalas and three Avengers girls. Well that’s an exaggeration. Honor Blackman appears only fleetingly in flashback and in her brief appearances Joanna Lumley looks so bored she’s in danger of falling asleep. But we get to see a lot of Diana Rigg. 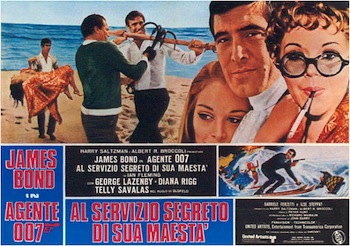 In the late 60s Albert R. Broccoli and Harry Saltzman decided to produce a more realistic James Bond that would be closer to Ian Fleming’s novels than previous entries in the series. Less gadgets, fewer jokes, more of the tough and quick thinking spy. I think they largely pull of the attempt to provide a deeper and more character driven film. Interestingly, the impending 2012 Bond entry Skyfall, directed by Sam Mendes, plans to do something similar and will also aim at a more character based piece. And looking back at the increasingly camp and jokey Bond films that followed the release of OHMSS – beginning with the dire and lazy Diamonds are Forever – Lazenby’s sole Bond effort has matured like a fine wine. Or martini, if you want to be cheesy.

Plot-wise, there’s nothing out of the ordinary about OHMSS. Starting in Portugal, our new Bond is introduced as he follows a mysterious woman (Diana Rigg) and eventually saves her from drowning herself. However, he’s attacked on the beach by baddies and she escapes. Lazenby’s first line is the joke “this never happened to the other fellar”. Following the opening titles (disappointing, which feature a montage of scenes from previous films) Bond meets Rigg again in a casino, or Contessa Teresa “Tracy” di Vicenzo as she’s known. Rigg is slightly offbeat as the Bond girl, and in an alternative universe this part would have been played by Brigitte Bardot (who decided to star in Shalako with Connery instead). Anyway,Bond is kidnapped while leaving the hotel, and they take him to meet Marc-Ange Draco (Gabriele Ferzetti), the head of a European crime syndicate. Draco reveals that he’s Tracy’s Dad and tells Bond of her troubled past, offering him one million pounds to marry her. Bond refuses, but agrees to continue courting Tracy under the agreement that Draco reveals the whereabouts of Blofeld, boss of SPECTRE.

After a brief argument with the tetchy M (the marvellous Bernard Lee) and the usual flirtation with Miss Moneypenny (Lois Maxwell) at MI6, Bond heads for Draco’s birthday party in Portugal. There, Bond and Tracy begin a romance, and Draco sends Bond off to a law firm in Switzerland. There, he breaks in to the office of a lawyer, and finds out Blofeld is corresponding with the London College of Arms’ genealogist Sir Hilary Bray, attempting to claim the catchy title “Comte Balthazar de Bleuchamp”. He does this with the assistance of a bizarre 60s safe-cracking “computer” which is so bulky it has to be lifted in by crane by a fellow agent under cover in a nearby building site. It does the job, although these days I imagine you’d be able to do the whole thing with an app.

Bray is played by George Baker and somebody along the line made the unwise choice of allowing Baker to dub Lazenby’s voice when Bond impersonates him. It leads to an uncomfortable half hour of the film which doesn’t help Lazenby’s case as an actor. Bond goes to meet Blofeld (Savalas – nicely oily in the role – he’s even cut his earlobes off to prepare himself for becoming Bleuchamp), who has established a clinical research institute in the Swiss Alps. There Bond meets a group of young women patients, the “Angels of Death” (including Lumley, Julie Ege and Catherine Schell). Bond later visits the room of one patient, Ruby (Angela Scoular – tragically to commit suicide in 2011), for a romantic encounter. Removing his kilt, Ruby responds by exclaiming “it’s true!” Later, Bond sees that Ruby, apparently along with each of the other girls, falls into a trance while Blofeld brainwashes them to distribute bacteriological warfare agents throughout various parts of the world. Blimey!

Bond as Bray tries to persuade Blofeld to leave Switzerland, so the British Secret Service can arrest him without violating Swiss sovereignty; Blofeld doesn’t want to and then rumbles him anyway, locking him in the control room of a cable car. After much clambering about, Bond escapes on skis – at one point losing a ski which results in the best one-legged ski chase in cinema. Bond later finds Tracy after being pursued through a busy Christmas fayre, very well executed and a rare scene where we see Bond scared. A blizzard forces them to a remote barn, where Bond proposes marriage. The next morning, Blofeld catches up with them after another ski chase. Here, Lazenby slips into Connery humour – when a baddie accidentally falls into a snow plough and is chopped to pieces he quips “he had guts”. The wicked Blofeld then causes an avalanche to stop our heroes, and captures Tracy.

Blofeld goes on to hold the world to ransom with the threat of destroying its agriculture using his brainwashed women (for added effect just imagine Joanna Lumley conquering the world), demanding amnesty for all past crimes and that he be recognised as the current Count de Bleauchamp. Fair enough? Not really, especially as we witness one of those excruciating scenes where the villain attempts to woo the heroine. With a glass of cheap wine and a fag. So Bond gets together with Draco to attack Blofeld’s headquarters and rescue Tracy. The headquarters characteristically explode, but Blofeld escapes in a bobsled, resulting in a high speed ice chase.

With only a few minutes left the film gears up for its extremely effective and downbeat ending which very neatly follows the intense chase scenes. Bond and Tracy get married in Portugal. They’re all there in their finery; M, Q and a tearful Moneypenny. The newlyweds drive away in Bond’s Aston Martin. When Bond pulls over to the roadside to remove flowers from the car, Blofeld and his partner in crime Irma Bunt (Ilse Steppat) commit a drive-by shooting that kills Tracy. A police officer pulls over to inspect the bullet-riddled car, prompting a tear-filled Bond to mutter that there is no need to hurry to call for help by saying, “We have all the time in the world”, as he cradles Tracy’s body. Close.

Director Peter R. Hunt does a fine job throughout – the obvious back projections typical of the era only spoiling the chase scenes slightly. This was his only Bond film as director (although he was involved with Dr No, Goldfinger and From Russia With Love as an editor). He did however direct two Roger Moore non-Bonds in the 70s, Gold and Shout at the Devil as well as working on The Persuaders! Perhaps more interestingly, Hunt worked as an editor on the Bond antidote The Ipcress File and there are some slight similarities, although this may be mostly down to the John Barry score. And I think George Lazenby, apart from the awkward Sir Hilary scenes, is fine too. Mainly perhaps because his presence is refreshing, and it’s easy to forget just how irritating Connery could be at times – something qualified when he crept back in Diamonds are Forever. Lazenby is in many ways the least conceited of the Bonds, and he convincingly suits the tough guy aspect of the role that’s also characteristic of Daniel Craig.

Possibly the most memorable feature of OHMSS is Diana Rigg, who appears as an ambiguous Bond girl in a gratingly masculine world. There’s the whole uncomfortable thing about her Dad paying Bond to marry her, and there is a scene where Draco punches her and knocks her out when she wants to go back to help Bond instead being bundled into a helicopter following her rescue. We don’t really find much about Tracy’s “troubled past” and perhaps the film could have dared to be more of the character study that it originally set out for. But Rigg has an undeniable screen glow, and it’s odd that the cinema didn’t do more with her.

George Lazenby quit the role during the shooting of OHMSS. Apparently his agent advised him that spy films were old hat. And it’s difficult to look through his subsequent CV without gritting one’s teeth. He’s kept himself busy, although the only thing I’m familiar with is the 1983 tv movie The Return of the Man from UNCLE where he plays a character called “JB”. However I would love to see the 1971 film Universal Soldier in which he co-starred with Germaine Greer. Now she would have had something to say to Draco.

John Barry’s music is as excellent as always, although essentially it is the same theme throughout the film and oddly there is no main title song as such and we miss Shirley Bassey or whoever belting it out. Still, there’s the more low key We Have All the Time in the World by Louis Armstrong which is more in keeping with the mood of the film and became much more well known a quarter of a century later. I watched the 2006 remastered OHMSS on DVD and it is a delight. It reminded me of the snow set cable car fest Where Eagles Dare from around the same time, which would serve as an excellent companion in a dream double bill. Broadsword calling Danny Boy…?