Major, right now you got me about as confused as I ever hope to be.

Mostly set with the backdrop of virgin snow, Where Eagles Dare is as close to a perfect Christmas movie as you’re going to get. It is also one of the most enjoyable films ever made; a perfect boy’s own romp that’s only spoilt if you happen to question the premise that Richard Burton and Clint Eastwood make plausible German soldiers. And that Burton, a legendary drinker at the time, can convincingly leap from the top of one cable car to the next. But it all adds to the fun. 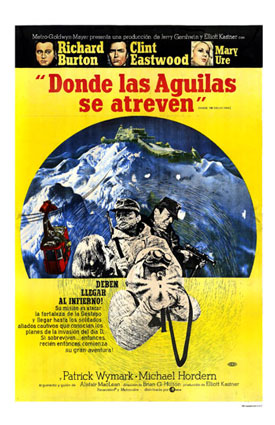 The plot is a comic strip affair. A fast moving caper featuring the most modish looking white parkas you’ll ever see. Hollister has nothing on them. A U.S. General, one of the brains behind D-Day, is captured by the Germans. He is taken to the Schloß Adler, a castle built strategically high in the Alps and headquarters of the SS. A team is assembled and briefed by two very British MI6 officers, Colonel Turner (Patrick Wymark) and Admiral Rolland (Michael Hordern). They are led by Major John Smith (Burton) and the American Lieutenant Morris Schaffer (Eastwood). Their mission is to parachute down, slip in to the castle, and rescue the General before the Germans can question him. Easy. Another agent, Mary Elison (Mary Ure), joins the mission in secret, known only to Smith.

As the mission kicks off, two members are mysteriously killed (including, sadly, the great Neil McCarthy), but Smith ploughs on, keeping Schaffer as a close ally and secretly updating Rolland on developments by radio using the call sign ‘Broadsword’. As Broadsword he calls Rolland, who takes the alias “Danny Boy”. The film pans out as a visual joy: the snow, the aforementioned parkas and – before we know it – our heroes are drinking in a bar with Ingrid Pitt. What more could you ask for?

Smith and Schaffer are captured by the Germans following a bar room episode and separated from the surviving members of the mission, Thomas (William Squire), Berkeley (Peter Barkworth) and Christiansen (Donald Houston). These are an odd triumvirate; middle aged (and destined for lesser film and tv roles in the future). Why MI6 would seriously pick them for such an important mission is anybody’s guess. But their part in the tale will be revealed later. Smith and Schaffer escape their captors easily and hitch a ride on a cable car — risky, but the only approach to the castle. Mary, posing as a new maid, has been brought into the castle by Heidi (Pitt) and Major Von Hapen (Derren Nesbitt), a dastardly Gestapo officer, takes a shine to her. This is Nesbitt’s finest role. Watch and you will weep and the great loss here of this fine British actor – he should have done much more with his career (actually Derren Nesbitt was involved in some bad publicity in the 1970s when he was accused of mistreating his wife. No doubt this didn’t help to keep the good parts rolling in).

Mary helps the cold and weary Schaffer and Smith climb in through a window to access the castle. General Rosemeyer (Ferdy Mayne) impressively arrives in a helicopter. This – along with Polanski’s the Fearless Vampire Killers – is Mayne’s second great castle role of the 60s. He’s suited to it. Senior Nazis, vampires. Mayne’s your man. Another key baddie Colonel Kramer (Anton Diffring – who else?) joins him in interrogating the captured General. Well, I say interrogating. More sitting nonchalantly and sipping fine wines. Thomas and the others turn up and reveal themselves to be German double agents. Smith and Schaffer also casually intrude, but Smith suddenly appears to betray Schaffer, announcing himself as “Major Johann Schmidt” of SS Military Intelligence and calling Schaffer a “punk”. Ouch. Clint obviously remembered this turn of insult for his run of successful “Dirty” movies that started just two years later…

Smith reveals the identity of the hostage general — just a humble actor posing — and also explains that Thomas and his gang are British impostors. To test them, he proposes they write the names of their fellow conspirators to be compared to the personal list in his pocket, and divulges the name of Germany’s top agent in Britain secretly to Kramer, who silently nods agreement. After the three finish their lists, Smith shows his own list to Kramer, which is a smart but blank notebook. To the general surprise, Smith admits the rescue operation was a cover for the real mission — to discover the identities of German spies in Britain. Touché!

Meanwhile, Mary, preparing some explosives (there are a lot of explosives in this film, pockets full of them), runs into von Hapen again; he takes her to the castle’s cafe (not bad, considering), and presses her to recite the tale of her assumed identity. He queries her story, prompting him to investigate – but walks in just Smith finishes his own absurd story. Mary’s entrance distracts him and the entire German baddie collective is shot, after which the group escapes with Thomas, Berkeley and Christiansen as prisoners. Schaffer sets explosives everywhere to create diversions, and Smith takes the group to the radio room, where he informs Rolland of their success. Or Danny Boy, who he contacts under the alias of Broadsword. It takes him a while, calling Danny Boy repeatedly under the alias of Broadsword. Eastwood goes to town with a machine gun in each hand. It’s really rather incredible.

They proceed to battle their way to the cable car station; Thomas is sacrificed as a decoy, and Berkeley and Christiansen attempt their own escape, but Smith climbs atop a cable car, destroys it with an explosive and then jumps on another to join the others, them all leaping mid-descent to board a smart red bus, prepared earlier as their escape vehicle. They drive like mad to an airfield with soldiers in pursuit, and barely make it onto a disguised getaway plane, where Colonel Turner is waiting for them.

Smith briefs Turner on the mission and confirms the suspicion that Turner is indeed the top Nazi agent in Britain, whose name the late Kramer had agreed to before; Turner had been lured into participating so MI6 could expose him, with Mary (Smith’s trusted partner) and Schaffer (a clueless American with no connection to MI6) specially assigned to the team to ensure the mission’s success. Turner attempts to shoot Smith, however MI6 made sure the firing-pin was removed as they knew he would attempt such a dastardly move. Deciding to save face, Turner commits suicide by jumping out of the plane. It’s a very chilling scene, with Patrick Wymark giving Burton a particularly old fashioned look before he steps out.

The film ends with Schaffer saying to Smith “Do me a favour, will ya. The next time you have one of these things, keep it an all British operation” to which Smith replies, “I’ll try, Lieutenant”. Clint Eastwood seems genuinely happy with this brief rapport, as is Burton. Where Eagles Dare was still early in Eastwood’s career. With only a few spaghetti westerns under his belt, he was still perhaps adjusting to his stardom – and I like to think his overall bafflement with the goings on in this film are genuine. On the other hand Richard Burton is obviously much more world weary. If rumour is true, and he was consuming several bottles of the hard stuff every day, it’s unlikely he had much recall of the film when it was completed. But he’s still fantastic, even if the stunt scenes have to be taken with a pinch of salt. But – as stories go – Burton and Eastwood both joked about the dominance of stunt extras. And although absurd, Where Eagles Dare has some excellent set pieces. Probably best is where Burton fights for cable car supremacy with Houston and Barkworth.

Cliché coming up, but one appropriate for such a fun film experience: ENJOY.