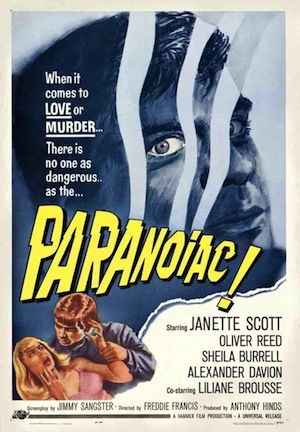 I’ve recently tracked down a copy of Paranoiac, a 1963 film directed by Freddie Francis, scripted by Jimmy Sangster and starring a young Oliver Reed. The film is part of Hammer’s series of psychological thrillers, that followed the success of Scream of Fear in 1961. Different from the usual Hammer output at the time, the films were in black and white and concentrated on non-supernatural plots in modern settings. They were also usually quite melodramatic. The general theme of Paranoiac is madness. Of the stark raving variety.

Oliver Reed plays Simon Ashby, a belligerent young man who is fond of a drink or two. He’s part of an odd family still reeling from the death of his parents in a plane crash and the apparent suicide of his elder brother Tony that followed the tragedy (apparent because – you’ve guessed it – the body was never found). Aunt Harriet (Sheila Burrell) and sister Eleanor (Janette Scott) share the Ashby country pile with difficult Simon. I say difficult because he’s portrayed by Reed at his drunken best. Although only receiving second billing to Scott he is the key actor in Paranoiac – reeling through the film in an inebriated rage, veering between leaning on family lawyer John Kossett (Maurice Denham) for cash handouts and racing home in his sports car to empty the brandy decanters and scream abuse at the servants. He’s a nasty young fellow and Reed plays him magnificently.

Things get off to an immediately creepy start in Paranoiac with Eleanor seeing glimpses of Tony hanging around, and this rather fragile young girl is pushed rather quickly to leaping off a cliff. Fortunately, Tony (Alexander Davion) seems benign as he saves her and is shockingly reintroduced into the family circle. Simon almost runs him over and then roars off in his car after ruining a flowerbed, whilst a suspicious Harriet turns him over to a grilling from Kossett. It’s all rather convenient you see, as Tony’s reappearance will grant him the Ashby fortune, otherwise due to Simon in a few weeks. Although something of a bugger for him, Simon doesn’t seem too bothered, his main concern being generally drunken and beastly. However Kossett subjects “Tony” to a “series of questions” (along the lines of “what did I buy you for your ninth birthday?”) to ensure that he really is the heir to the Ashby fortune.

Of course he isn’t, although they’re mostly fooled. “Tony”, it turns out, is in the services of Kossett’s crooked son (John Bonney), and matters aren’t helped by the still fragile Eleanor falling for him (together they escape the old trick of somebody tampering with the brakes on the car whilst they’re on a cliff edge picnic, Eleanor being saved from plunging to her doom yet again. Why do so many characters in so many films choose to have a picnic on a cliff edge?) Matters race towards an increasingly insane conclusion, with Reed pulling out all of the magnificent stops including wild eyed organ playing, masked knife-wielders, skeletons bricked up in basements and a concluding house fire.

Apart from Reed and Denham, the acting in the film is unmemorable. Lillian Brousse walks in and out as a French maid but is only irritating (as is Scott to be honest). Reed made several films for Hammer in the early 60s starting with small roles in the Two Faces of Dr Jekyll and Sword of Sherwood Forest in 1960. His first substantial part for them was in the more memorable The Curse of the Werewolf in 1961. Strangely, he was then moved from the horror genre to appear in more offbeat offerings over the next two years including Captain Clegg, The Scarlet Blade and The Damned. Most of these are now forgotten, although Joseph Losey’s The Damned turns up on television fairly regularly and is worth catching. In my view the 60s were Reed’s best decade as an actor by far.

Paranoiac is very low budget and very daft, although Oliver Reed does what he could do best – deliver an over the top although very entertaining performance. In his mid twenties, he looks trim and rather dashing. Some may even say that he was handsome at the time. I’ll let you be the judge of that.