What use would a woman’s blood be to the soil? It needs a man.

What if there was a precursor to such rural British horrors as The Wicker Man, Eden Lake and Sightseers ?

Robin Redbreast was broadcast as a BBC Play for Today in December 1970. Due to a power cut that evening, many viewers missed the full transmission and so it was rebroadcast a few months later. This was the first time a Play for Today had ever earned a repeat showing. It hasn’t been shown since however, and the recent DVD release only features a surviving black and white copy. Writer John Bowen was also responsible for the Ghost Story for Christmas in 1978 The Ice House. 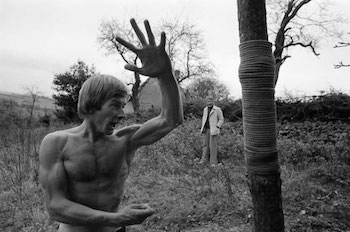 Script editor Norah Palmer (Anna Cropper) leaves her friends in London, Jake (Julian Holloway) and Madge (Amanda Walker), seeking for “clearer thought” and rents a cottage in a remote rural area of southern England. Jake and Madge are sceptical of her departure – perhaps she’ll take to drink out there all alone (although they are never seen without a wine glass in hand)

During the night a bird is put down the chimney into the cottage and Rob comes to Nora’s rescue. She allows him to seduce her, despite finding her contraceptive cap missing. She falls pregnant and the villagers contrive that she does not leave before Easter. Her car will not start, buses will not stop for her, and phone calls are cut off at the “exchange”.

Rob returns to discuss it all. They realise villagers surround the house and an eye appears at the keyhole. Two villagers enter, including Peter with his axe and Nora faints. She does not hear Rob’s screams. She awakes to find Mrs Vigo and Mr Fisher in the house. She is told that Rob has left to go to Canada.

Mr Fisher explains the cultural importance of the name Robin in British folklore: Robin Hood, Robin redbreast etc. We have already been told that Rob had been called “Robin” only by the villagers, and his real name was Edgar. He has played a sacrificial role, and will be replaced by a new “Robin”…

Robin Redbreast has a very matter of fact strangeness about it, helped by the lack of any soundtrack music. Bernard Hepton is superb as Fisher, a man you wouldn’t really want to let into your home. Cropper is pretty good too, and also worth looking for is the 1972 Dead of Night episode she appeared in called The Exorcism.