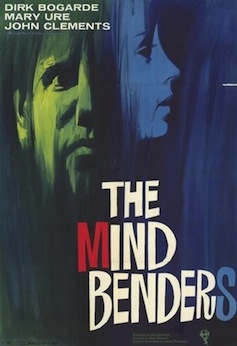 1963 was a busy year for Dirk Bogarde and he appeared in four very diverse films. A final outing as a now middle aged Simon Sparrow in Doctor in Distress, I Could Go On Singing with Judy Garland (for which he contributed some of the script) and of course Losey’s masterpiece The Servant.

The last of the bunch was The Mind Benders, a film directed by Basil Dearden that has now unjustly dropped into obscurity. Bogarde stars as Dr Henry Longman, a scientist dabbling in experiments in isolation. Although sometimes billed as science fiction or as an early cold war thriller, and the subject matter hints at 60s hallucinogenic cinema, The Mind Benders doesn’t neatly fit into any genre. However it is an absorbing and literate film that’s worth seeking out.

The film opens with Professor Sharpey (Harold Goldblatt) throwing himself from a moving train on route to Oxford University. A large sum of money is found on him and upright Major Hall (John Clements) assumes that the unfortunate don was a traitor, selling secrets to the Russians. Hall goes on to discover that Sharpey was working on isolation experiments with his colleagues Dr Tate (Michael Bryant) and Longman, with Sharpey and Longman actively taking part in the tests. A man born to snoop around, Hall confronts Longman with the suggestion of Sharpey’s treason and an unconvinced Longman talks himself into allowing Hall to witness an isolation experiment. With Longman as the subject…

This is a film devoid of special effects or sensation. However the black and white photography of The Mind Benders helps to enhance the creepy presence of the isolation chamber, a huge water tank where Longman is suspended without light, sound or feeling. Tate and Hall observe him as he passes through several states of consciousness, including confusion, panic and hallucination, in a marathon seven hour session. The chamber is likened to something from Frankenstein and this is how we perceive Longman as he emerges from it – almost a rebirth as he comprehends reality with wide, frightened eyes. And this is one of the great Bogarde performances; at this point we know that he’s really going to get his teeth into the part.

Hall believes that Sharpey was brainwashed, and that a man fresh from the isolation tank is open to interrogation and suggestion. Here lies the crux of the film. He coerces Tate into a further experiment, where they taunt the vulnerable Longman with improper suggestions about his wife Oonagh (Mary Ure). Hall believes, rather naively, that whatever wrong they do to Longman can be undone (a bent mind can be unbent so to speak). And whilst Longman appears to quickly recover from his ordeal and it seems that the brainwashing aspect of the experiment has failed, we know that something is going to be amiss, and the second act begins with Tate visiting the now visibly odd Longman (Bogarde manages to make use of a pair of glasses alone to appear effectively sinister) and the now pregnant Oonagh. The rest of the film plays out with Tate and Longman wresting with their own uncontrollable Frankenstein’s monster in the shape of Bogarde at his nastiest.

The Mind Benders is a very talky film but saved by excellent performances all round. Ure is as good as Bogarde as the unfortunate Oonagh, and Wendy Craig (who also appeared in The Servant) has a supporting role. The ending, which I won’t give away, drives home the theme of rebirth that’s latent throughout the film and it finishes on an interesting note with Longman and Hall apparent friends, suggesting an alliance with academia and the military that perhaps fuelled several other similarly themed films of the period (The Ipcress File certainly springs to mind).

It is strange how this film has become forgotten, especially as it follows Dearden and Bogarde’s celebrated collaboration Victim from 1961. All in all, and following my recent rediscovery of The Man Who Haunted Himself, I’d like to suggest a reappraisal of Dearden’s work. Or perhaps a select one, and I’ll be missing out Man in the Moon with Kenneth More.