The BBC are currently showing a short season of dramas about much loved heroes of British comedy, with an emphasis on television stars who had a bloody hard time of it in their personal life. The first film, The Curse of Steptoe, followed the careers of Harry H.Corbett and Wilfred Brambell – stars of Steptoe and Son, arguably the best comedy series ever made which ran between 1962 and 1974. For me, Steptoe and Son took the hardest premise for a television series and ran with it. A small set, two main characters trapped in their horrible lives and constantly arguing. A life with no escape. Old man Steptoe, disgusting, decrepid, selfish but oddly compelling, and his depressed son Harold, still living at home although fast approaching middle age; a wasted life with alternatives always beyond his grasp. Similarities between the Galton and Simpson scripts have been made with Pinter and Beckett and they are worthy ones; the writing is often exceptional – the comedy always shrouded in the bleak and inevitable. 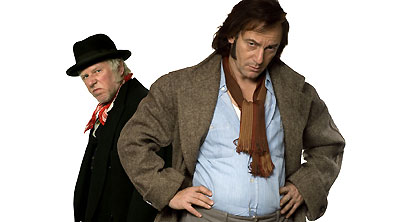 In The Curse of Steptoe, Harry H.Corbett (played brilliantly by Jason Isaacs) remarks “it’s like Waiting for Godot, although Godot never bloody comes” when waiting for the perpetually late Wilfred Brambell (Phil Davis) at an early read through. Corbett, a highly regarded British stage actor in the early 1960s who was mentioned in the same breath as Albert Finney and dubbed the British Marlon Brando, is enticed by the brilliance of a Galton and Simpson one-off television play, against the better judgment of his theatrical peers, including the director Joan Greenwood. The writing team, who’d enjoyed great success with Tony Hancock, were looking to escape from the shackles of situation comedy, but all are quickly sucked into the even greater success of Steptoe and Son. The series rolls on and on, the writers falling slowly into despair as the situations are exhausted, and the actors into the grim realisation that they will never escape their celebrated creations. The stars are seen having lunch over the years in the BBC bar, their early enthusiasm turning to the frustration over wasted lives worthy of the on screen father and son. The final bar shot sees them seated in drag, showing how stretched and uninspired the situations had become.

Phil Davis was a slight disappointment as Wilfred Brambell/Albert Steptoe. Although he looked the part, he failed to fully capture the physical weakness and vocal mannerisms of the man. I’d always imagined a well turned out gent (akin to the role he played opposite The Beatles in A Hard Days Night) who scrubbed down well to play the dirty old man of Shepherds Bush. Davis seemed to fall somewhere in between. Jason Isaacs, however, was outstanding and as well as delivering a spot on impersonation of Corbett, his sometimes very odd vocal delivery, added depth to a frustrated and not wholly likeable man. Neither revelled in the lives of laughter expected from the stars of sitcom. Brambell was a boozy homosexual, haunted by his failed marriage and subsequent arrest for soliciting himself in a public toilet. Corbett, also drawn to the booze in later years, also looked back on a failed marriage and an unfulfilled career. One of the most uncomfortable scenes in Steptoe and Son is where Harold tries and fails to become an actor, feebly recreating the famous contender scene from On the Waterfront. The British Marlon Brando he would never be.

An exceptional film, The Curse of Steptoe appears to be ending happily before whipping the carpet from under your feet. Corbett, having become a father himself in a new relationship, takes Brambell quietly to one side and they agree to finally quit their roles. Brambell is seen fleetingly in a new relationship of his own with a young man. But just as it’s all looking rosy, and just when you’re thinking “didn’t they get back together again for a final tour of Australia?”, we see Corbett in the final scene, already finding it difficult to find work post-Steptoe, receive that fateful phone call… Like the bleakest of situations for Harold Steptoe, there really was no escape.

Despite being exhausted from a hectic weekend, I valiantly sat up on Sunday night to watch the Bafta awards. I was glad I did, as most of my favourites from the last year received some recognition. Javier Bardem was named Best Supporting Actor for No Country For Old Men, Control received a screenwriting award and Atonement was named Best Film. I was also glad to see that Shane Meadows was given the award for Best British Film for This Is England. I’ve followed Meadows’ career for years, from his early short films including Small Time through to Twenty Four Seven and the excellent A Room For Romeo Brass and Dead Man’s Shoes. Like all of his work, This Is England is set in his native Midlands and follows a schoolboy’s experience of skinhead culture in 1983.

I watched This Is England the night after I’d seen the exhausting Ashes to Ashes, a new over the top TV series set in 1981 – a 1981 writ large with new romantics everywhere and a soundtrack of synthesised pop to drive you crazy. Although my classroom memories are probably more attuned to new romanticism than skinheads, I appreciated Shane Meadows film much more than Ashes to Ashes because it chose not to ram the 1980s culture, in this case mostly ugly, in my face. There was some attention to get the detail of the period correct, and, like Ashes to Ashes This Is England featured shots of clunky early computers and the fashions – skinhead or otherwise – are shockingly dated. There is also an effective montage opening the film that brought the real horror of the early 80s back for me – the Falklands War. Margaret Thatcher. But the film eavesdropped on a set of characters that are probably evident in any time; the vulnerable, the easily led and the bullies.

Tempted by the friendship and shared culture of the local skinheads, Shaun (Thomas Turgoose) is attracted by the uniform, music and petty vandalism that his new comrades can provide. This is until the edgy and unpredictible Combo (Steven Graham) returns to the gang following a spell in prison. His presence causes a rift, with particular consequences on Shaun.

Like all of Meadows’ films, there is some difficult and uncomfortable subject matter, made – like A Room For Romeo Brass – more disturbing by the involvement of impressionable children. Bleak at times This Is England does offer some hope at the end, and although it brought to mind Alan Clarke’s Made In Britain – itself made in 1983 – it wasn’t nearly as depressing in outlook. Perhaps times really have changed for the better.

None of This Is England‘s cast received awards on Sunday night and the Best Actor went to Daniel Day Lewis for There Will Be Blood, who himself appeared in another slice of social realism in My Beautiful Laundrette. This 1985 film was much lauded although I’ve always found it unrealistic – especially Day Lewis. A little too much style over content. More Ashes to Ashes than This Is England.

So onto my pick of the older books I’ve enjoyed in the last year, where I’ve made a point of reading several authors I’ve always had in the back of my mind. The most prominent of these was probably Mervyn Peake, and I managed to complete the whole of the Gormenghast trilogy early in the year. I also made a point of catching up with Graham Greene. The other two authors I read several books by were both new to me – Cormac McCarthy and Neil Gaiman. Two writers who couldn’t be more different, but there’s diversity for you.

My non-new favourites of 2007, in no particular order:

The time has come again to trawl through the best books of the last twelve months. I’ve divided my choices into several categories. The first two cover new fiction.

I’ve bought an alarming number of hardbacks this year. Reading books hot off the shelves is increasingly addictive. Right at the beginning of the year I enjoyed The Thirteenth Tale by Diane Setterfield. This is a novel I expected to receive more coverage. It’s very well written with some fine gothic undertones. Also recommended highly are two nominees for the 2007 Booker. Ian McEwan’s On Chesil Beach and Darkmans by Nicola Barker. We all know about the first, although the second is another book sitting in unfair obscurity. Worth picking up if you have the strength and stamina for its 800 plus pages. Incidentally, I found the eventual Booker winner, The Gathering by Anne Enright, tedious and unoriginal. What were the judges thinking of?

The best book of the year to grace my presence was The Road by Cormac McCarthy. It’s uncomfortable, harrowing, profound, frightening. It’s a masterpiece. Most importantly, it’s a book people will still be talking about in ten, twenty years time.

Lastly in this section, if you do have any Christmas money left over, I’d suggest Engleby by Sebastian Faulks. Quite different to anything else he’s written and very, very good.

My pile of newly released paperbacks of 2007 has reached toppling height, although there are only a few I would recommend highly. Again, some of them are criminally obscure. The Testament of Gideon Mack by James Robertson is an unsettling yet gripping book about a man who may or may not have met The Devil. Fantastic.

Less obscure is The Tenderness of Wolves by Stef Penney, a novel that’s received divided responses, at least going by the comments I received for my review. But I found it an absorbing and original read. However, my favourite paperback of the year by far was Neil Gaiman’s Fragile Things. This is a collection of supernatural stories that is well written, wry, highly original and, most importantly, scary.

Sadly, it was the books that received too much attention that disappointed the most. Don de Lillo’s Falling Man, Jed Rubenfeld’s The Interpretation of Murder and, I’m sorry to say, the final Harry Potter took up too much reading time that that would have been better spent on something more worthwhile. Here’s to 2008.