The director Joseph Losey is probably best known for his collaboration with Harold Pinter on the films The Servant (1963), Accident (1967) and The Go Between (1970). He also let his hair down for the curate’s egg that’s Modesty Blaise (1966). The Servant is possibly Losey’s best film, a brilliant monochrome study of the master and servant relationship turned very inside out and starring Dirk Bogarde and James Fox.

Although filmed two years earlier, Losey’s The Damned was also released in 1963. Made by Hammer, it was one of their psychological horrors of that decade. I watched it for the first time last week, one of the few Losey films I hitherto hadn’t had the pleasure of seeing, when it was shown by the BBC as part of their British Film Forever season. Throughout the summer, the Beeb have shown some obscure British films linked to their weekly genres of romance, costume drama, social realism, thriller, comedy, war and horror. Obscure choices possibly because they don’t currently have the rights to the films they’ve been covering in the accompanying documentaries (for example The Servant, as well as other obvious British favourites such as Get Carter, If… and A Clockwork Orange), but the unusual selection is welcome because I’ve had a chance to see a lot of criminally underexposed gems. Films such as Sidney J. Furie’s The Leather Boys (1964), Michael Reeves’ The Sorcerers (1967) and Losey’s The Damned… 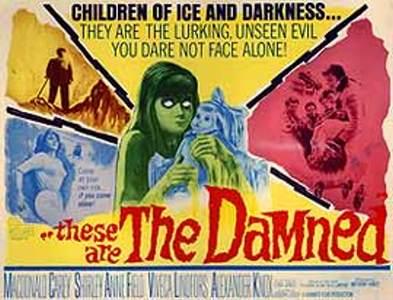 Filmed in black and white, The Damned has an Anglo-American cast, the most recognisable actor being the young Oliver Reed. Reed is a favourite of mine, although I heartily concede that he has a very unusual acting style. He’s good in films like this, that require little or no elements of a naturalistic performance. He’s best on broody, which he does magnificently here. Think of a warm up for his Bill Sykes in Oliver!.

Reed plays an edgy leader of a seaside motorcycle gang, who take exception to his sister (Shirley Anne Field) becoming involved with an older man (Macdonald Carey). What’s looking decidedly run of the mill suddenly takes a weirder turn when our three leads stumble across a sinister military base where a group of children are apparently held captive. What follows is an eerie science fiction film with dashes of horror.

For audiences in the early 60s, the makers of The Damned play on the apparent inevitibility that Mankind is going to be destroyed by a nuclear bomb. It’s sooner rather than later in everybody’s expectation, or when the time comes as the children menacingly predict. Cue a plot development where the group of youngsters turn out to be a bunch of radioactive pre-teens kept to survive the bomb and inherit the Earth. Cue great early 60s sci-fi. Cue lots of effective eye-rolling from Reed.

The Damned is quite dated now, but the script is above average for this type of film and Losey’s direction shines as usual. The children reminded me of the youngsters in Village of the Damned, a film based on a John Wyndham story, and although more use should have been made of them (perhaps a little too much preliminary eye-rolling gets in the way) the film develops quite darkly and manages to ask awkward questions about incest, impotency and death. There’s also an infuriatingly catchy theme tune. Not bad for a Hammer B-movie.

Hammer films are back in production. I had quite a surprise last night when I turned over to the Ten O’ Clock news. Expecting to see footage of Gordon Brown attempting to perfect his smile, I was instead greeted by a clip from The Curse of Frankenstein. I immediately presumed that Christopher Lee had died, but he hadn’t and it was a report about the return of Hammer films.

I’ll believe it when I see it; when I’m in the cinema watching new Hammer Horrors. New films were promised in the early 2000s then nothing, there was talk in the 1990s then nothing. The last productions I’m aware of bearing the Hammer name were the TV series Hammer House of Horror and Hammer House of Mystery and Suspense in the 1980s. The last feature films must have been more than thirty years ago…

More of this please!

The Fortean Times isn’t a publication that I’d normally subscribe to, but the June issue has an excellent article about Hammer films by Kim Newman. Worth reading.

If you’re looking for a review of an obscure British film of the early sixties then look no further. The IMDb classifies Scream of Fear under the plot keywords swimming pool, little girl, father and corpse. It also provides the cheesy tagline:

For maximum thrill . . . we earnestly urge you to see this motion picture from the start!

And they’re absolutely right. You just need to enter the spirit of that tagline to enjoy this entertaining film. And remember – at the time people would often wander into cinemas halfway through a screening. If they liked a film they would stick around until the feature started all over again so that they could watch the beginning. This was allowed for years – I can remember watching Star Wars in this back to front fashion. In fact, Alfred Hitchcock banned or attempted to ban people from doing this when Psycho was released, so disturbed that the film’s impact would be ruined.

Scream of Fear (aka Taste of Fear) was directed for Hammer in 1961 by Seth Holt. It stars Susan Strasberg as a wheelchair bound girl menaced in a house on the French Riviera, thinking she is going crazy when she keeps seeing the corpse of her father. It’s in black and white – not out of the ordinary for 1961 but unusual in our memory of Hammer films; full colour blood and Christopher Lee is what normally springs to mind.

Hammer produced a series of monochrome and more psychological horrors in the early 60s (I’m still waiting to see the repeat of the brilliant Paranoiac featuring Oliver Reed, who served his acting apprenticeship under Hammer). These films have all but disappeared. Pleasingly for me, Scream of Fear was shown in a late night slot on the BBC recently and was introduced as the best Hammer Horror. It’s only a B-movie really, but yes, it’s one of the best. I can imagine it in a double feature as a warm up to one of Hammer’s more colourful exploits of the period, such as Curse of the Werewolf. I can also imagine couples sitting in their Odeons – when Multiplexes weren’t even yet a dream – and sipping their Kia-Ora. The more seasoned leaning over to the other and whispering “don’t worry darling, the real horror is yet to come!”

For the seasoned horror fan of 2007, Scream of Fear will appear terribly dated. It’s a very talky film, with the Strasberg character going over and over the strange things that are happening to her, and it’s really more thriller than horror, more twists than scares. Some of the acting, especially Strasberg’s, is quite wooden, but I have a special fondness for this film. I first saw it years and years ago and found it suitably creepy. Look out for those swimming pool scenes – they’re still very effective. Worth checking out.