there was a war on: you could tell that too from the untidy gaps between the Bloomsbury houses – a flat fireplace half-way up a wall, like the painted fireplace in a cheap dolls’ house, and lots of mirrors and green wall-papers, and from round a corner of the sunny afternoon the sound of glass being swept up, like the lazy noise of the sea on a shingle beach.

This extract from the opening of Graham Greene’s The Ministry of Fear sets the mood for the novel perfectly; the imagery of the dolls’ house prepares for the surreal atmosphere of the book, as does the use of mirrors and eerily familiar interiors for the nightmare world of Arthur Rowe. The numbed familiarity of the London Blitz is also brought to the fore; writing in 1943, Greene brilliantly sketches the backdrop of a capital at war – strong enough for a modern reader to taste the sound, smell and fear of the bombings.

The Ministry of Fear is one of Greene’s oddest books, and reads at times like his usual prose has been soaked in Kafka and Conrad. The brilliant opening chapter finds Rowe at a sorry wartime fête, where he correctly guesses the weight of a cake on the advice of a fortune teller. Here’s starts Greene’s own nightmarish take on the wrong man story, with Rowe pursued by dark forces across a London under threat of the air raid. It’s a brilliant tale, illuminated by the panic and uncertainly of 40s London. As usual, Greene can say a lot in few words; whilst the novel is brief it is also dense and layered, proving again that he is not always the easy author we take him to be.

Unfortunately this novel doesn’t live up to its early promise. Perhaps I was more interested in the background of the Blitz rather than the plot, which attempts to unravel the weird set pieces, which include a murder at a séance, an encounter with a seedy bookseller and a spell in a sinister hospital, to explain itself more logically. This somehow takes the fun out of things, but The Ministry of Fear is worth a read for an example of good literature that just doesn’t age.

For some time now I’ve had a mental block when it’s come to Graham Greene’s The End of the Affair. No doubt this is due to the image of Ralph Fiennes’ heaving buttocks from the most recent film adaptation, which unfortunately come to mind whenever I think of the novel. But what Mr Fiennes has done is plant the suggestion of seediness in my mind, and Greene’s novel, both his depiction of London during and after the war, and Bendrix and his snatched affair with Sarah and all that follows really does read as a seedy business. 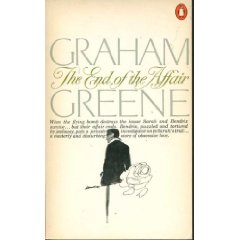 Bendrix narrates the novel, a writer by trade who can well articulate his own shortcomings as a human being. He’s aware of his own bitterness and hatred, but Greene also reveals one of the most arrogant voices I’ve read in a long time. He perches himself far above many of the people he encounters, whether it’s the humble private detective or the betrayed husband Henry. All inhabit a late 1940s world of bombsites, dark bars and darker weather; a setting that’s breathtakingly realistic. But this isn’t why I found the book seedy; it was more the people in it, and all but one of the characters I disliked. In fact the only one I was ambivalent towards, the young girl who Bendrix picks up and takes to Sarah’s funeral, is one of the few that has a lucky escape from him. Of those that suffer, particularly Henry, I tended to share the contempt that Bendrix has for them.

Like many of Greene’s other novels, the subject of Catholicism rears its head. Here, Greene treats Belief and God as something that can be caught, an infection, and just as Sarah contracts pneumonia from the dank London streets, Bendrix fears that he, too, will ultimately believe in God but it will be little more than an unwanted infection. Throughout the book there are also odd glimpses of the supernatural; a skin disease apparently healed by Faith, Sarah’s deal with God that she will not see Bendrix after she thinks he has died in an air raid.

For such a brief piece at 160 pages, The End of the Affair is incredibly dense. It drained me as a reader, and Greene continues to prove that less is more, and that the lesser writer would fail in the temptation to drag out the affair even more. But it’s a painful book to read.

For a self-imposed challenge I’ve decided not to buy any more books this year. Instead I’ll be trawling through my dusty bookshelves to read the countless unread books that I already own. First up is Graham Greene’s 1955 novel The Quiet American. Set in Vietnam, it follows the uneasy relationship between Thomas Fowler, an ageing and boozy English reporter, and Alden Pyle, a young and idealistic American. The unease between them is provided by Phuong, the lover of Fowler, who the younger man falls for. The book begins with the death of Pyle, and Fowler remembers the preceding months in flashback. How Pyle makes a bid for Phuong, how Fowler deceives them into thinking that his wife in England will divorce him and how Pyle goes on to heroically save the older man’s life. The Quiet American draws to a close with Fowler discovering Pyle’s secret terrorist activities, and deciding if his decision to act on impulse and stop him is a worthy decision or a personal one.

At first I was nervous about reading this novel. Sometimes my history is sketchy, and I wanted to avoid having to revise the history of Vietnam in order to enjoy the book. This isn’t really necessary and The Quiet American has aged very well, with its setting easily reset in any contemporary war zone. Unfortunately any reader will find the background events of conflict and cruelty familiar. This is the enduring, and perhaps ironic, strength of the book. Fowler is also a recognisably flawed hero, and it takes only a small amount of effort to remove any images of the two cinema personifications of him, namely Michael Caine and Michael Redgrave, from the mind. Greene’s writing style always fascinates. It’s a quiet novel; very brief and often understated. It was like listening to a very faint but still compelling voice. I had to concentrate on it and move as close as I could, but the prose was far superior than anything I’ve read in a long time. It’s a masterful work.

If I was forced to make a criticism at all I would probably opt for questioning the portrayal of Phuong, who comes across very much as the unequal side of the love triangle. She’s a too passive character, and we learn little about her other than her quaint confusion between England and America (she asks Fowler if there are skyscrapers in London – remember it’s only 1955) and the novel very much rests on the Fowler vs Pyle fulcrum. There’s some great tension in their encounters. Where the novel also falls down is, oddly, during one of its strongest passages. Stranded after curfew when their car runs out of petrol, the two men seek sanctuary in a lookout tower. Fearing for their lives, they embark on a thorough, lucid and well-reasoned political debate when in reality they’d probably do no more than whisper “shit!” at their dangerous predicament. Greene can create scene and atmosphere perfectly but, like Fowler, he appears numb to the life threatening dangers of the war zone. Such is life.

One of the advantages of having a sprawling collection of yellowing paperbacks is the delight of stumbling over titles you’ve forgotten about. I’ve recently rediscovered my small collection of Graham Greene novels, and realising that I have only read Brighton Rock and Travels With my Aunt I’ve decided to go on a Greene binge, aiming to complete The Power and the Glory, The Honorary Consul and The Quiet American in succession. If you don’t like Greene, look away for a while. Or prepare to be converted…

Set in Mexico during the religious persecution of the 1930s, The Power and the Glory follows the misfortunes of an unnamed Catholic priest. Often a little worse for wear from his favourite tipple brandy, this whiskey priest manages to stumble out of trouble as he is pursued throughout this outstanding novel. And it really is – I’d forgotten how good a writer Greene was. Written in 1940, this novel hasn’t dated whatsoever. The setting and cirmcumstances just serve as history and the writing, especially the dialogue, is particularly well written.

After recently reading so much Cormac McCarthy, in particular the Mexico-set All the Pretty Horses, I found a lot to compare between the two authors. Both have a way of delivering their stories with a degree of emotional detachment; we’re simply told the simple facts and left to make our own emotional responses – which we can’t help but do. In The Power and the Glory I couldn’t help but be drawn into the plight of the whisky priest. He’s a real and believable character with many dimensions, self-doubting and self-torturing. And it might be coincidence but I couldn’t help wondering if McCarthy has been influenced by this novel – there’s a familiarity about the encounters and recurring characters, the lengthy journeys into peril, even the pitiful prison scenes. Like McCarthy, there’s sometimes the worry that plot devices might get in the way of believability – with coincidence winning out too easily where loose ends are no more – but also like McCarthy the strength of Greene’s writing always wins out.