Fragment of Fear is a psychological thriller starring David Hemmings. Made in 1970 and directed by Richard C. Sarafian (see also Vanishing Point) the film had all but disappeared from memory until recently resurfacing for online rental. What at first looks to be a quaint period piece with an endearing supporting cast (Arthur Lowe, Wilfrid Hyde-White, Daniel Massey and Patricia Hayes) surprisingly turns out be be a very effective and tense ride. 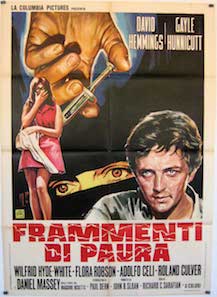 David Hemmings was always one for getting himself into a psychological pickle in the early 1970s. He followed Fragment of Fear with Unman, Wittering and Zigo (1971) and Voices (1973). The films tend to share a common thread, with an individual tormented by unseen menaces (a teacher troubled seemingly by his pupils in Unman, Wittering and Zigo) and slowly losing a grip on reality which generally leads to a shocking ending (Voices has an added supernatural element). Both are worth checking out, as is Hemmings’ lead in Dario Argento’s Deep Red (1975).

Tim Brett (Hemmings) is a writer and recovering drug addict who takes it upon himself to solve the murder of his aunt Lucy (Flora Robson). Although it happens in Italy he’s soon dashing back to London – obviously keen to interact with Lowe, Hyde-White et al. What follows is an intriguing flow of events where Brett slowly sinks into paranoia. He meets a woman on a train who hands him a letter, which is later revealed as a threatening warning mysteriously typed up in his own flat which he is later unable to clearly articulate. He’s subsequently plagued by menacing phone calls. Of course, nobody believes him. Policemen and officials all appear as ambiguous in identity, including Arthur Lowe and Daniel Massey giving excellent and effortless turns. Yootha Joyce and Kenneth Cranham (miles from their respective early 80s George and Mildred and Shine on Harvey Moon comedy roles) also turn up to hang around on the fringes of Brett’s increasing madness. It’s all quite magnificent and Hemmings in particular is very good, breaking out into a visibly uncomfortable sweat as things begin to fall apart for him.

By the way, the Aunt Lucy plot isn’t particularly interesting, and she is revealed as a do-gooder of ex-offenders turned blackmailer. It might be difficult to imagine Flora Robson capable of this. The ex-offenders form the background of the mysterious group called the “Stepping Stones” who cause havoc for Hemmings. What’s more interesting is the dark ending of the film, which leaves Brett in a very bad place and also leaves it open as to whether his girlfriend Juliet (Gayle Hunnicutt) has anything to do with it all.

There’s minimal location shooting and the film relies mostly on interiors but this works in its favour, especially the scenes inside Brett’s flat, with the dark corners and creaky furniture. The music by Johnny Harris is very of its time but still apt. Ah, and I’ve forgotten to say very much about Gayle Hunnicutt, Hemmings’ wife who often co-starred with him. To be honest, she’s unmemorable in Fragment of Fear, although watch out for her Nana Mouskouri style glasses. They have an important part to play in the growing paranoia.

The actor David Hemmings appeared in his fair share of obscure films. For every iconic movie such as Antonioni’s Blow Up (1966), there are countless lesser known gems such as The System (1964 and co-starring Oliver Reed), Eye of the Devil (1966 with David Niven) and The Long Day’s Dying (1968 with Tom Bell).

Together with his wife Gayle Hunnicutt he appeared in the psychological thriller Fragment of Fear (1970), a film I’m sure I have on VHS although I’m unable to find it. A shame, because it’s now very rare and almost impossible to track down, and it’s worth the price of admission alone for the supporting cast which includes Arthur Lowe and Wilfred Hyde-White. Hemmings and Hunnicutt also made Voices in 1973, a supernatural offering sometimes known as Nightmare. I remember seeing Voices when it was shown as part of the afternoon television schedule in the early 1980s, and it proved an odd choice for daytime tv – especially to an impressionable teenager – as the film is very much in the late night chiller flavour. It’s a very creepy affair that I’ve eventually now caught up with after all those years. 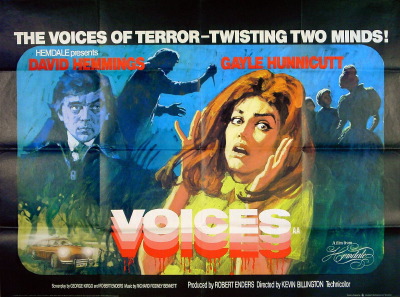 Voices has some similarities with the more famous Don’t Look Now from the same year. And whilst Nicolas Roeg’s film is ultimately superior, Voices (directed by Kevin Billington) is still a minor classic in its own right. The theme of the film, which concerns a couple grieving for their drowned child who make an attempt to revive their troubled marriage, also has echoes in Lars von Trier’s recent Antichrist. More interestingly, however, The Others – the 1999 film starring Nicole Kidman – completely lifts the ghost story element of Voices, going as far as to steal some of the visual flair of the film and even the final denouement. Online reviews I’ve found also liken elements of Voices to The Sixth Sense, proving that’s there’s perhaps nothing original in a successful horror film.

The film begins very effectively, with a mostly silent opening (again a similarity to Don’t Look Now) where tragedy strikes on a boating holiday (and like Antichrist, it’s revealed that a child is put in grave danger due to parental neglect). The parents in question, Hemmings and Hunnicutt as Robert and Claire, are next seen driving through dense fog, attempting to find the remote house that belongs to Claire’s mother. Where they’ll attempt a reconciliation of sorts; flashback scenes reveal that Claire has attempted suicide and spent some time in hospital. Ploughing on blindly through the fog, Robert narrowly avoids a head on collision although they eventually locate the path to the house.

Based on a stage play by Richard Lortz, Voices does at times show its theatrical roots, although this plays to its advantage and creates a very close and claustrophobic atmosphere. It’s a two-hander between Hemmings and Hunnicutt throughout, and the sinister edge to the film is added by Claire’s gradual realisation of the mysterious others present in the house. If the film appears slow at times, it’s certainly worth sticking with for the last half hour where the supernatural element plays out. And even if this film is almost 40 years old, I feel I shouldn’t reveal the shock ending.

David Hemmings had a dual career as a director, and was behind the odd but interesting The Survivor (1981) with Robert Powell and the ghastly Schöner Gigolo, armer Gigolo (1978) with David Bowie. However he is possibly best known, indirectly, for directing episodes of Magnum P.I. and The A-Team which are these days sadly more likely to grace the daytime schedules than Voices.