From my phase of collecting Penguin firsts, and I’m sure I also have a copy of The Time Machine somewhere. The white on orange stripe is still instantly recognisable, but does it tell us anything about the book? Admittedly, in my Penguin collecting I cared little for the authors in question and only wanted to fill the gaps in the numbers 1-200.

How many of those early Penguins titles do we recognise today? These are the first ten of their paperbacks published:

I can’t name all of the authors or all of the titles, and I must confess I’ve read none of them.

In the 1960s Penguin began to get a little more daring. It was the cover of this book that inspired me to want to read it aged 14. Although the 60s were long gone by then, I still found something adult, daring, even promiscuous in this cover.

The colourful text is hard to read, but it’s selling the book with:

Tearful Kate bored with her grey husband in their grey stone house is driven to indescretions she can hardly handle without Dava’s help. But Dava has her own hands full with the passions of her rich and vulgar builder…

Anyone who’s ever studied modern drama will recognise these distinctive blue Methuen editions. Looking through my books, I realise I have been unconsciously collecting them over the years. Harold Pinter and Joe Orton feature largely in my collection. The Caretaker first made its presence known in 1960, and the cover here features Donald Pleasence as Davies and Alan Bates as Mick from the original production.

The Methuen editions always feature a black and white photograph from the featured play, bordered by the recognisable blue frame. I particularly like this cover; Davies and Mick – both troubled, both potentially dangerous, both in their own way hopeless. They’re not facing eachother and that’s typical of the play- characters lost in their own little worlds of plans and dreams for the future.

Harold Pinter is a master of language, but the play was apparently inspired by a very brief and silent scene. As a young man, struggling in his transition from actor to writer, Pinter was living in a flat in Chiswick with his first wife Vivien Merchant. It was there that he found the inspiration for The Caretaker in the characters that frequented the building. Quoted in Michael Billington’s biography, The Life and Work of Harold Pinter, he explains:

The image that stayed with me for a long time was of the open door to this room with the two men standing in different parts of the room doing different things … the tramp rooting around in a bag and the other man looking out of the window and simply not speaking … A kind of moment frozen in time that left a very strong impression.

Although playing an old man, Donald Pleasence was only 41 in 1960, and he played the old tramp again in 1963 when the play was filmed with a cast that also included Alan Bates and Robert Shaw. In 1991, aged 72, Donald Pleasence returned to the London stage for the last time to revisit those crowded London rooms of The Caretaker. I was lucky enough to see a performance, and I am always pleased to report that Pleasence was still breathtaking in the role.

This is the first in an occasional series. I’ve been sorting through some old books recently and have rediscovered what are, in my opinion, some examples of classic and memorable cover designs. 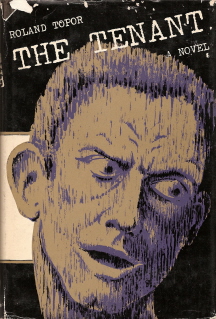 Topor’s novel tells the story of a man called Trelkovsky, who rents a flat in Paris. He slowly goes mad, haunted by the previous tenant of his rooms who jumped to their death from the window, and by the fellow lodgers in his apartment block, who he is convinced are out to get him. My first exposure to The Tenant was via Roman Polanski’s 1976 film. It’s weird, disturbing, has some very dark humour that you’d expect from Polanski and, in my opinion, is something of a forgotten classic. No doubt I bought the novel on the strength of the film, wanting to endure Trelkovsky’s torment first hand.

I love this cover because the artwork conveys to me exactly Trelkovsky’s despair. You can also see the hint of the beckoning open window behind him. It also hints at exactly what this book is about; if my short synopsis has put you off, the cover of the book undoubtedly will also.

Often I forget what my books look like; trapped for years in a bookcase they only make their spines visible. I’ve moved house many times in the past 20 years; the cover of The Tenant revealing itself in snatches as it is packed into a box where I’ve often wondered if, unlike Trelkovsky, I was making the right move.