I wish it were as easy as that. But trying to remember a dream is like, how shall I put it, being out at night in a thunder-storm. There’s a flash of lightning and, for one brief moment, everything stands out: vivid and startling. 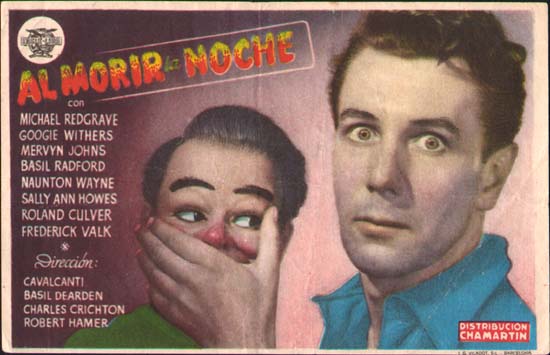 An architect drives to a country house to consult on some renovations. Upon arrival he meets a number of guests, and despite never having met any of them he reveals that he has seen them all in a recurring dream and is able to predict spontaneous events in the house before they happen, such as another guest turning up late and a pair of glasses breaking. He also partially recalls with some apprehension that something awful will later occur, and becomes increasingly disturbed.

Dead of Night is the legendary 1945 British anthology horror film made by Ealing Studios. The individual stories were directed by Alberto Cavalcanti, Charles Crichton, Basil Dearden and Robert Hamer, wrapped in a framing story that explores the recursive nature of dreams. It stars Mervyn Johns (as the architect Walter Craig), Googie Withers and Michael Redgrave and stands out from British film of the 1940s, when very few horror films were being made. It had an influence on subsequent films in the genre when horror later regained popularity. The Amicus portmanteau films of the 60s and 70s were directly inspired by Dead of Night (characters recount their dreams in The Vault of Horror (1973) and a haunted mirror sequence appears in 1974’s From Beyond the Grave). There’s Creepshow (1982) as well. The recurring nightmare theme was also used to good effect in a 1980 episode of Hammer House of Horror and a good chunk of Twilight Zone stories. The idea of various characters recounting supernatural tales remains an enduring plot device to this day, used most recently in Neil Gaiman’s Unlikely Stories, and the circular narrative has been well employed too; I recall the 1970s children’s TV series Children of the Stones applying it for good effect.

Although regarded as a horror classic (regularly cited so by Martin Scorsese), none of the Dead of Night directors were subsequently linked to the genre, with Basil Dearden only ever really coming close; their work staying more aligned to traditional Ealing comedy fare.

The framing story is directed by Dearden and is effective thanks to Johns’ wonderful performance as the increasingly disturbed Craig. The house guests attempt to test his foresight and set him at ease, while entertaining each other with various uncanny tales:

A racing car driver sees a hearse outside his house, realises a premonition and later avoids a fatal bus crash. This is also directed by Dearden and based on The Bus-Conductor, a short story by E. F. Benson which has also become something of an urban myth story with its catchphrase “room for one more”, with the bus being substituted for a lift or an aeroplane in some stories. Dearden went on to make countless British films including The Blue Lamp (1950). I have previously reviewed his final film The Man Who Haunted Himself (1970) starring Roger Moore as a man who meets his own double, which plays out not unlike an extended Dead of Night segment.

A ghostly encounter during a children’s Christmas party. Directed by Alberto Cavalcanti; story by Angus MacPhail. I know Cavalcanti best for the excellent wartime drama Went the Day Well? (1942). Unfortunately this is one of the less effective parts of Dead of Night, although helps to nicely place it as a Christmas film and hence this posting.

A haunted antique mirror. This one is quite creepy, directed by Robert Hamer, probably most famous for Kind Hearts and Coronets (1949), and written by John Baines. Baines also wrote the screenplay for the 1960 horror The Hands of Orlac, where a famous pianist inherits the hands of a murderer.

A comic tale of two rival golfers, one of whom becomes haunted by the other’s ghost. Directed by Charles Crichton and based on a story by H.G. Wells. Another Ealing perennial, Crichton made The Lavender Hill Mob (1951). Too light for the genre and over long, the golfing sequence is another weak part, although serves to set things up appropriately for what is to come.

The film is best-remembered for the final story told by psychiatrist Dr. Van Straaten of an unbalanced ventriloquist (Michael Redgrave) who believes his amoral dummy Hugo is alive, leading to murder and madness. Directed by Cavalcanti, story by Baines, Redgrave is excellent and, next to Johns, his performance is the most memorable in the film. The theme of the troublesome ventriloquist dummy is echoed in William Goldman’s novel Magic, but the Redgrave sequence also reminded me of the psychological theme of Psycho, mostly notable the ending of Hitchcock’s film.

The framing story completes when Dr. Van Straaten accidentally breaks his glasses and the power goes out, the nightmare continuing with Craig escaping into a montage of scenes and characters from the house guests’ tales. The dummy Hugo is seen strangling him when he wakes up to the sound of a telephone ringing. It is an invite to the country to consult on some renovations. As the film ends, he is again seen driving up to his host’s house as he did in the opening scene…

Dead of Night is at times an uneven film, a symptom of multi-director anthologies. A touch overlong, the party and golf sequences were cut for the US release. It cleverest aspect is the Chinese Box plotting and circular narrative, and whilst some of the performances appear dated, the script is very well written. And the effectively odd ending must have been quite a shock for the immediate post-war audience, who perhaps left the cinema not sure if they were coming or going.

Why did you have to break your glasses..?