It has taken me two weeks to finally come down to earth and write a review for Before the Dawn. And nine months to write another blog post. Of course, that’s nothing like the 35 years it’s taken Kate Bush to return to the Hammersmith Apollo for a new series of live shows. And even though I didn’t need convincing more, Graeme Thomson’s 2012 biography Under the Ivy, with its lengthy and excellent account of 1979’s The Tour of Life, and even longer deliberation on why Kate Bush would never tour again, finally drove the message home that live shows were never going to happen. 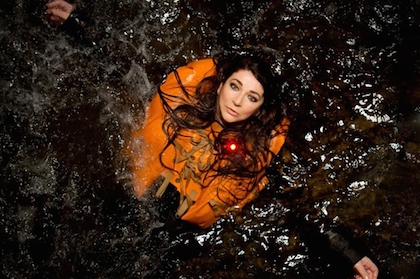 Next to David Bowie, Kate Bush is our most enigmatic star, but I find it difficult to write at length about her music. It’s probably because I have an emotional reaction to it. Hounds of Love is probably my favourite album, but I don’t really know what it’s about – especially the second side. Like many Bush fans, I’m guilty of crying at her recent concerts. We don’t know why – only that we have a deep love for her music.

So where to start with Before the Dawn? I’d long resigned myself to the fact that I wouldn’t be attending a show after my failure to buy tickets during the March 2014 fiasco. Add the unreliability and inflated prices of tickets later being offered on Gumtree. But miraculously, I discovered that legitimate tickets were trickling out on the Eventim website and I was successful in buying a hospitality deal for September 2nd (bought on the day, resulting on a subsequent mad dash to London, racing over the Hammersmith flyover and wondering where the hell I was going to park). The Eventim hospitality deal is perhaps a separate story to tell, and I found the pre concert dinner in the church opposite the venue just one step too bizarre to digest.

The set-list of Before the Dawn is common knowledge now, and that it was largely dominated by Hounds of Love and Aerial, with songs from The Red Shoes and 50 Words for Snow. There was nothing dating further back than 1985, and the only noticeable similarity with the 1979 shows was that Bush appeared barefoot. As she has matured immeasurably as an artist since then (and if you don’t believe me, take a fresh look at the at times embarrassing Live at the Hammersmith Odeon DVD), I welcomed the focus on that later work (although, strangely, The Sensual World was ignored). In particular, The Ninth Wave sequence from Hounds of Love has I think always been crying out for a visual element. I’ve said I’ve really only had an emotional reaction to her work, and I’ve loved The Ninth Wave but could articulate little about its content. To a lesser degree as it is more of a sedate piece, A Sky of Honey from Aerial, is also perfect material for the stage.

However, before the expected visual feast Bush walks on to the stage with her seven piece band and five strong chorus (including her son, Bertie, who increasingly plays a major contribution in the show). In this first act there are breathtaking versions of Lily, Hounds of Love, Joanni, Top of the City, Running up that Hill and King of the Mountain. There is a lot to take it – it’s an emotional opening for the packed auditorium – but most noticeable is how relaxed Bush seems, and how incredibly strong her voice sounds.

The second act takes us into The Ninth Wave, which is a relentless and powerful piece of theatre. So much so that concentrated repeated viewings would only do it justice and bring it all together in the mind, the lasers and the helicopter included. Stand outs are And Dream of Sheep performed as a video sequence with Bush floating in a life jacket and the beautiful Hello Earth.

Following the interval the third act is Aerial territory, where the striking scenery includes puppetry and a backdrop of sweeping bird visuals. Bertie takes on the role of the painter (originally narrated, unfortunately, by Rolf Harris), and later he gets to sing a new song, Tawny Moon. It’s uncertain if such a structured show will allow for an encore, but after her goodbyes Bush returns to the piano for Among Angels and then the band return to close with a magnificent Cloudbusting, a moment where the highly appreciative audience stand up and almost begin to lose control.

Twitter rumours involved the other national obsession David Bowie joining Kate on stage. Of course it didn’t happen, and to be honest it would have been more fitting it Peter Gabriel or even Elton John (I’m thinking Snowed in at Wheeler Street) made an appearance. But this was her moment alone. This is possibly the best concert I have ever been to, but might allow time to let what for a long time seemed the impossible sink in.