In The Life and Death of Peter Sellers Roger Lewis tracks down every one of the more obscure films that Sellers made. For such a renowned actor, it’s incredible that many of his movies were left unreleased. For example, there is only one print in existence of Mr Topaze, his sole directorial effort, a film he attempted to destroy the negative of. Lewis does remarkably well with his detective work, making it an obsession to see the entire Sellers output. The only film that escapes him is A Day at the Beach, his desire to see this forgotten gem being dedicated to an entire chapter. Fifteen years after the publication of the Sellers biography, A Day at the Beach is now widely available. 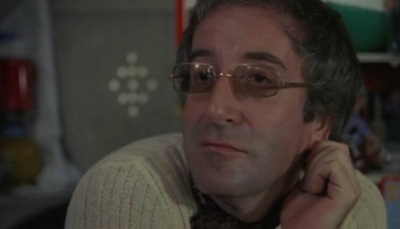 A Day at the Beach is legendary for three reasons.

That it features Sellers in an uncredited cameo, that it was forgotten for so long, and for Roman Polanski.

Next to the obscure sex comedy What? this is the least known of Polanski’s films. He wrote the screenplay in 1968 but, devastated by the murder of Sharon Tate the following year, passed over directorial duties to Simon Hesera. There’s some debate over how much of the film, if any, that Polanski directed. There’s certainly his trademark style in evidence, and apparently he had a hand in the editing. Nevertheless it sits comfortably with his films of the period, most notably Cul de Sac, and the seaside settings do tend to link his otherwise unrelated works down the years. For example, the stunning location work of The Ghost.

A Day at the Beach is a bleak study of a hopeless alcoholic. Mark Burns plays a desperate drinker and would be intellectual called Bernie who embarks on a day out with a young girl, who we presume is his daughter. The film follows the tragic path of a day spent in the pursuit of drink and ends depressingly.

At this point you may be forgiven for asking what exactly all this has to do with Peter Sellers. Well he enters proceedings during the course of the day, along with Graham Stark, and they feature as a pair of outrageously camp homosexuals. Bernie is rude to them, although succeeds in extracting a few bottles of their beer. It’s a peculiar scene, Sellers and Stark are hilarious in their fleeting appearance, but I think the performances are better than caricature. Until very recently the Sellers episode was available on YouTube, although it’s now been removed. Obviously far too public for a film that wishes to remain in the dark.

Completed in 1970, A Day at the Beach was released in 1972 before vanishing for several decades. Mark Burns, who died in 2007, never saw the film. Polanski, to my knowledge, has never publicly commented on or even acknowledged it. Apparently Sellers and Polanski were good friends. An odd mix, especially as The Life and Death of Peter Sellers uncovers very few people willing to admit to any affection for Sellers, and the book largely aims to portray him as a megalomaniac, a selfish, uncompromising lunatic. But a genius nevertheless, and this is perhaps where he connected with Polanski. A Day at the Beach is a bizarre product of this friendship. And it would be interesting to catch up with Roger Lewis about it.

A Day at the Beach is also worth catching for a wonderful cameo from the Polanski regular Jack MacGowran, playing a particularly defensive deck chair attendant. For a film that’s taken so long to see the light of day, it’s certainly worth a look.