Where to start? One of the best things about this film is the cast, and one can easily forget how essential Sid James and Herbert Lom were as supporting actors in the 1950s. Oddly, the least remembered actor from the roll call above is probably the star of the film: Stanley Baker. It’s a shame he’s been forgotten as he always gave strong performances, here impressive as an ex-con who is recruited into a no-nonsense trucking firm.

Cy Endfield’s film has aged surprisingly well. The casting helps, but the writer-director has made a quality film all round, from the excellent script to the well orchestrated truck races. And races they are; once Baker is taken on by the surly boss (Hartnell, giving one of his excellent pre Doctor Who character roles) he realises that he must risk his life every day by driving like a madman to make the required number of deliveries. This is further complicated by his decision to take on the resident maniac (Patrick McGoohan).

For maniacal film roles McGoohan is very good in Hell Drivers, and if he appears a touch over the top the film needs to be forgiven from lurching into melodram from time to time. What the drivers are actually doing in this film is fairly vague; leaving their depot and driving miles across the country as fast as they can, filling up their trucks with grit and then driving back again. Over and over again. “Red” (McGoohan) has decided to be the best at this particular game, pulling such stunts as overtaking on the left, ramming the other trucks that get in his way and tearing across a dangerous quarry that acts as a short cut. There’s no room for Health and Safety in Hell Drivers. The drivers are expected to maintain their own vehicles and seat belts are unheard of (and life threatening as Baker takes his inaugural journey in a truck minus decent brakes). It’s all rather exciting.

So Baker, the softly spoken and quietly tough Welshman, commences battle with the raving Irishman (McGoohan), and eventually almost everyone as he uncovers that Hartnell is running a corrupt outfit. This is the crux of the film, and it works extremely well. Heroes and villains are clearly defined, and the struggle between the good and the bad could easily be transplanted to a different genre, for example a Western. And somewhere, someone has no doubt compared Hell Drivers to specific Westerns, although I personally find the British setting perfect. This film just predates the change in British cinema that was about to take place, and Baker personifies the type of lead that was about to be usurped by the likes of Alan Bates, Tom Courtenay and Albert Finney. Less of an antihero, less ambiguous, just your straightforward British lead. But Hell Drivers manages to convey very well what life in Britain was like more than half a century ago and before anyone had coined the term “kitchen sink”.

Cy Endfield’s most successful film was the better known Zulu that came a few years later. Whilst it also starred Stanley Baker, probably best remembered is the young Michael Caine. Alas, Zulu is now considered a Caine film through and through, although at the time he was relatively unknown and Baker was still the draw.
Typical of Endfield’s films is the lack of good female actors. In Hell Drivers Marjorie Rhodes is fun as a landlady, but Peggy Cummins is quite irritating as the love interest who comes between Baker and Herbert Lom (here playing an Italian from his huge repertoire of stock roles). Cummins just grates, and tends to be responsible for introducing the most melodramatic moments.

But who can beat a film starring the future James Bond, Doctor Who and The Prisoner?

There is a type of film particularly suited to late night viewing. Late night winter viewing, where the viewer might be alone, and where the wind may be rattling at the window. The window is comfortably locked, and the film’s imagined terrors remain harmless, at least until the viewer becomes a little too engrossed. Night of the Demon is one such film. 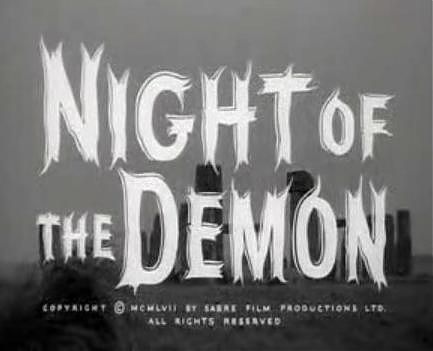 Night of the Demon is a brilliantly scary movie. Some may try to convince you that it’s the scariest movie ever made. It could very well have been, although there are two things that let it down. The first is the casting of Dana Andrews in the lead role, who is awful. Demon is a British movie, and I’m all for American stars cast in the lead with a host of good supporting English actors around them, but why Dana Andrews? He sleepwalks through this film, at times no different from the characters stuck in real hypnotic trances. For a man with a curse on him who has three days to live, he’s a little too relaxed about the situation. Especially as the other people in the film who have been exposed to such curses are raving and screaming (one of them even jumps out of a window).

The other problem with Demon is the one that most reviews tend to mention. The demon itself (pictured below) is exposed very early in the film, which does tend to spoil some of the suspense surrounding what exactly the curse is all about. The early demon sighting was also against the wishes of the director Jacques Tourneur, and the film’s producer decided to tag the monster on. But after seeing the film again I decided that the demon sighting isn’t wholly the mistake that it’s reported to be. It’s still scary (I wouldn’t want him around on a dark night, even if the windows are locked) and does whip you up into a state of tension that gets you through the slow opening scenes that follow. It also sticks in the mind, even if you have seen countless films like this. 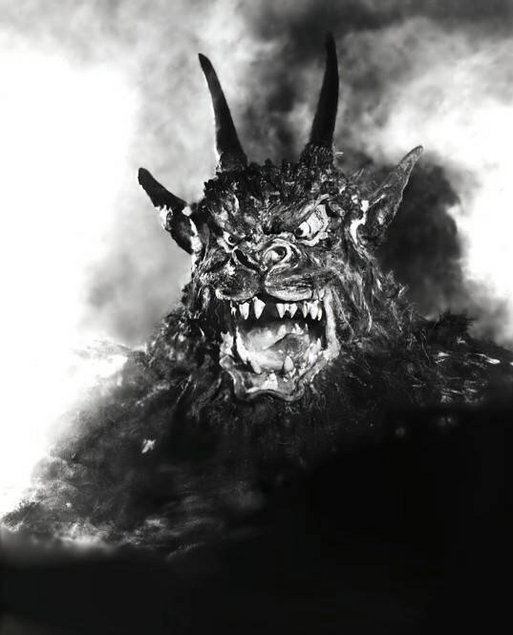 It is essential to mention that Night of the Demon is based on a short story by M.R. James called Casting the Runes. The film more or less follows the same story, which is about one man’s attempt to debunk the occult beliefs and activities of another. John Holden (Andrews) sets out to expose Julian Karswell (Niall MacGuinness) who is the leader of an apparant demonic cult. Karswell tries to warn Holden off, but he’ll have nothing of it and is eventually beset by a curse. Holden learns that he has been passed a small “parchment”, which he must return to Karswell before the time is up in order to reverse the curse. The film differs from the James story in that it leans on hypnosis as a theme. There’s an excellent scene where a man accused of murder is hypnotised to reveal what really happened to him, and another very creepy episode involving a séance.

The supporting cast are all excellent and make up for the dullness of Andrews (and the female interest Peggy Cummings, who’s also rubbish). Niall MacGuinness dominates the movie as the villain Karswell. He is simply brilliant, one of the best screen nasties of all time. With his urbane manner and his demonic goatee, he covers his true evil with a veneer of seedy politeness. The film borrows one scene from the James story although it does change it slightly. This is where Karswell is hired to perform magic tricks as a children’s entertainer. Even though he’s performing white magic he’s still darkly menacing. Maurice Denham and Brian Wilde (best known for mild mannered comedy performances in Porridge and Last of the Summer Wine) are also excellent as doomed demon victims. Reginald Beckwith is also good as the medium Mr Meek (pictured), and the cry it’s in the trees … it’s coming! was poached by Kate Bush almost thirty years later to open her song Hounds of Love. 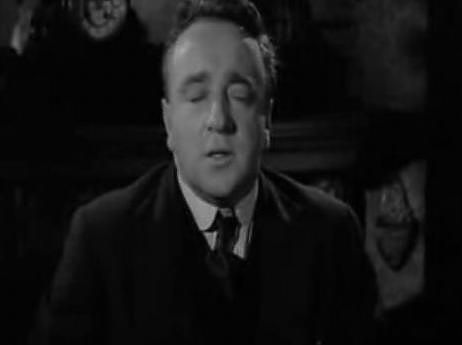 Made in 1957, this is a British horror that predates Hammer films (just) so it’s more of a throwback to the old Universal pictures, and kind of marks the turning point of the genre. If Hammer had got their hands on this instead I would imagine Peter Cushing and Christopher Lee in the two roles, with Lee most likely as Karswell. Night of the Demon is a well crafted film, with the last five minutes or so being some of the tensest in cinema. This is where Holden must return the parchment to Karswell in order to survive. Your hair will stand on end, especially if you don’t lock that window.