In 1976 the BBC moved away from their usual ghostly M.R. James Christmas offering. Instead, on 22nd December that year, they screened an adaptation of The Signalman by Charles Dickens. The Signalman is perhaps one of the all time classic ghost stories. Dickens excels in the genre but this is also a brilliant film; a demonstration of how low budget, atmosphere, great writing and performances can create something truly magical. 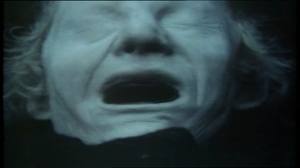 Denholm Elliott as the troubled and ultimately doomed signalman is possibly the greatest asset of this production. Elliott is magnificent, perfectly capturing the edgy and nervous man, condemned to dull, repetitive – yet very important – tasks in his solitary employment. So horribly haunted – he’s actually quite painful to watch at times.

Elliott is an actor perhaps not immediately thought of alongside the supernatural, although when you dig there are some gems. Most notably there is his appearance in Hammer’s To the Devil a Daughter (1976) and their tv classic Rude Awakening from 1980, Vault of Horror (1973) from Amicus and some obscure appearances in Mystery and Imagination in the late 60s (as Dracula) and the other tv appearances Supernatural in 1977 and The Ray Bradbury Theatre in the late 80s. But extending this list any further may suggest that Elliott was at times a jobbing actor. The Signalman, however, proves his immense talent.

Returning to our 1976 Dickens adaptation, the signalman of the title is troubled by ghosts, each of which has delivered a grim portent. He’s haunted terribly in his lonely employment. The first ghost warns of an awful collision in the tunnel nearby. The second of a young bride falling from a train. Both of these warnings come true, with the signalman a witness to the terrible events. The third tragedy is suggested by a visiting spirit covering its face, waving one arm and repeatedly calling “Halloa! Below there!” The signalman mistakes a traveller – who calls out these very words to him – for the ghost, and nervously invites the stranger (played by Bernard Lloyd) into his signal box. He recounts his tales to him, his attention often snatched by his solemn duties.

Ghost Story for Christmas director Lawrence Gordon Clark works up the menace wonderfully and the adaptation is written by Andrew Davies, who tackled both Bleak House and Little Dorrit thirty or so years later. The Signalman offers a cosy sort of terror, with the traveller mostly bemused by the odd railway worker until the eventual tragedy strikes, where the third and final terror strikes on the poor signalman himself. I think, however, by then it was a blessed release for him.

Although still a classic to watch, it’s probably not wise to look into the story too deeply. For example, why his employment is continued after witnessing multiple tragedies in the same small stretch of railway. Why didn’t his line manager look closely at health, safety and well being issues? Or at least grant the poor man a spot of annual leave. And so on. But remember, this is Ghost Story for Christmas time. Soak up the atmosphere. Believe.

“He was cut down by an engine, sir. No man in England knew his work better. But somehow he was not clear of the outer rail. It was just at broad day. He had struck the light, and had the lamp in his hand. As the engine came out of the tunnel, his back was towards her, and she cut him down. That man drove her, and was showing how it happened. Show the gentleman, Tom.”
The man, who wore a rough dark dress, stepped back to his former place at the mouth of the tunnel.
“Coming round the curve in the tunnel, sir,” he said, “I saw him at the end, like as if I saw him down a perspective-glass. There was no time to check speed, and I knew him to be very careful. As he didn’t seem to take heed of the whistle, I shut it off when we were running down upon him, and called to him as loud as I could call.”
“What did you say?”
“I said, ‘Below there! Look out! Look out! For God’s sake, clear the way!’”

Every Christmas we try to seek out a memorable theatre trip. For the second year running, the award goes to the Tobacco Factory in Bristol. Last year they staged a superb production of Alice Through the Looking Glass. This year they turned their attention to A Christmas Carol.

The Tobacco Factory has a small central stage area, flanked on all sides by the audience. Performances are not exactly interactive, although the actors are nevertheless aware of the close proximity of viewers surrounding them. This intimacy suits Dickens’ classic very well.

Andy Burden’s adaptation stars the excellent Chris Bianchi as Scrooge. Also worth mentioning is Felix Hayes, doubling up in a number of roles although most memorably as The Ghost of Christmas Now. Perhaps a role that Brian Blessed was born to play, although Hayes is suitably larger than life (or death) and booming magnificently. This version takes a few liberties with the text. There’s references to Bristol and to Brunel, and Burden, although perhaps wisely, omits the ignorance and want episode. It doesn’t descend into pantomime but it is heavy on humour, with Bianchi garbed in his nightcap and being dragged around the stage on a huge bed by the spectres of Christmas Eve. Even Jacob Marley’s appearance is played mostly for laughs. But when the scares do come, such as the visitation of the silent Ghost of Christmas to Come – dark hooded and stealthily setting out the graves for Scrooge’s final resting place – they’re handled superbly.

Importantly, Dickens’ enduring message isn’t spoilt at all, perhaps even spreading to the very young members of the audience. An excellent festive feast. A Christmas Carol runs until January 18th.

Reading Dickens’ The Chimes for the first time, I found it the perfect companion piece to A Christmas Carol. Where Scrooge is whisked through time by his ghosts on the eve of Christmas, Trotty in The Chimes is taken on a similar journey on the brink of the New Year. He witnesses some disturbing visions of a bleak, and very possible, future suffered by those closest to him. Dickens makes his message clear throughout the story that none of us are immune to such futures, and that all should take heed to “correct, improve, and soften them”.

“The voice of Time,” said the Phantom, “cries to man, Advance! Time IS for his advancement and improvement; for his greater worth, his greater happiness, his better life; his progress onward to that goal within its knowledge and its view, and set there, in the period when Time and He began. Ages of darkness, wickedness, and violence, have come and gone: millions uncountable, have suffered, lived and died: to point the way Before him. Who seeks to turn him back, or stay him on his course, arrests a mighty engine which will strike the meddler dead; and be the fiercer and the wilder, ever, for its momentary check!”

I’ll be taking a break for a few days, but look out soon for The Thirteenth Tale, Ian Fleming, H.P. Lovecraft and my return to the world of the meme … thanks for reading and commenting!

The recent mystery ghost story was The Signalman by Charles Dickens. His brilliant writing style really makes it the classic it is, and something that can be read again and again even when you know the terrible outcome.

Next to Oliver Twist, A Christmas Carol is probably Dickens’ best known work. Like The Signalman, you can hear the story and pass it on, with the result that people are telling the story who haven’t necessarily read it. I would say that the majority of people more or less know the basic story of Scrooge, but far fewer have actually read the original. Familiarity with A Christmas Carol comes from the countless film, stage and television adaptations over the years.

Continue reading Past, Present and Future

After reading the opening chapter of A Christmas Carol last night I considered that, like many of us, Ebenezer Scrooge lives in a comfort zone. He is comforted not just by the rewards of his avarice, but by his introverted existence; the locked doors and closed rooms of his friendless life (darkness is cheap, and Scrooge liked it).

When Marley’s ghost visits Scrooge he is disturbed most by the spirit’s restlessness and endless roaming. To be so unsettled and unset in one’s ways troubles him greatly:

“Seven years dead,” mused Scrooge. “And travelling all the time?”
“The whole time,” said the Ghost. “No rest, no peace. Incessant torture of remorse.”