The Syd Barrett story is a well documented one, although it’s a story crying out for a sensitive biography that is wise enough to debunk the many myths surrounding the man. Myths that have grown steadily prominent over the years. An LSD casualty, a raving recluse, a harmless eccentric, a troubled and mentally ill man; all are varying accounts of what went wrong in the life of Pink Floyd’s founder member. In Syd Barrett: A Very Irregular Head Rob Chapman pieces together Barrett’s life, documenting the solid evidence and dismissing the fanciful rumour to produce a very well written and painstakingly researched work. It’s a valuable account of a complex and often misreported life. 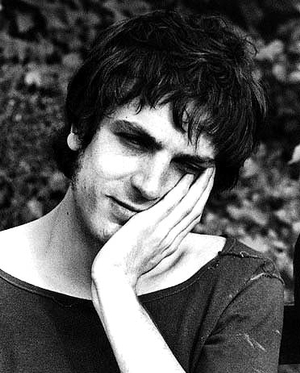 Barrett first caught my eye as an impressionable 12 year old, when the Relics compilation album fell into my possession. Quickly realising that Pink Floyd weren’t going to be my cup of tea, I was however fascinated by three songs all composed by Syd Barrett – Arnold Layne, See Emily Play and Bike. They were all strikingly far removed from the Pink Floyd of Relics and worlds away from Another Brick in the Wall, which had recently brought them back into the singles chart. Barrett’s songs offered charm and humour that was evidently lacking in the later incarnation of the band; he was my first clue of the eccentricities, invention and brief glimpses of genius that the best music of the 60s had offered. Further research into his mystique revealed that he had virtually withdrawn from life to exist only as a legend, glimpsed rarely in his home town of Cambridge.

Considering that the surviving members of Pink Floyd didn’t want to talk to him, it’s odd that Chapman’s book works so well. A Barrett devotee, he makes no secret of the fact that he’s no fan of the group once Syd had left the ranks. Indeed, he almost relishes in the irony that part of Barrett’s legacy rests upon his former band going on to become one of the most successful of all time – despite the reality that the musical style they settled on was far removed from his own. Given the lack of Floyd input (although Chapman does include a generous dose of Gilmour, Mason, Waters and Wright interview snippets from elsewhere) there are arguably richer contributions from many other players in the Barret story, including teenage girlfriend Libby Gausden, manager Peter Jenner, flatmate Duggie Fields, sister Rosemary and loyal fans from successive generations of songwriters Robyn Hitchcock and Graham Coxon (the Blur guitarist is interviewed at length and writes the introduction).

So why, apart from the Pink Floyd connection, are people so fascinated – so obsessed – with a man who stopped recording in 1970 when he was 24, gave his last interview the following year and avoided any contact with the world right up until his death aged 60 in 2006? A man who’s recording output amounted to the Pink Floyd debut album Piper at the Gates of Dawn and three solo albums The Madcap Laughs, Barrett and Opel (the last technically a compilation and only released in 1988). A man who, despite being regarded as a talented painter, destroyed most of his work so only a fraction remained after he’d died. A man who, by many accounts, was often repetitively bothered by intrusive pilgrims rolling up on his doorstep.

Chapman concedes that the Barrett fire was partly kept alive by the perpetual rumour mongering surrounding a sensitive man reportedly sent insane by drugs, possibly spiked by an uncaring circle of friends. Rumours that became more and more fantastic, but never challenged until now, as Barrett became more withdrawn and introverted, apparently getting fat on Guinness, apparently standing outside Harrod’s in a Yogi Bear tie, freaking out and putting his head through ceilings, even trying to flag down an plane he’d missed. Apparently an often violent and uncontrollable man (oddly though, one of the greatest myths of all – that Syd walked all the way back to Cambridge when he eventually left London – turns out to be true). But Chapman is willing to prove any perversely romantic urban myth untrue, and attempts to get to the root of Syd’s mental state, although drawing mixed conclusions (the closing chapter is almost painfully moving). Most revealing is the accounts given by his sister Rosemary, who portrays him as more complex than the sorry image of the Cambridge recluse, but nevertheless a lonely and often distressed individual.

A Very Irregular Head also works strongly in proving Barrett’s strength as a performer and songwriter, and Chapman at times moves into Iain MacDonald Revolution in the Head territory in closely analysing both music and lyrics. It’s convincing, proving that Barrett’s small and briefly executed body of work was both highly original and hugely influential. Chapman also argues that it’s no great crime that Barrett abandoned the music world, reasoning that his surviving contemporaries The Rolling Stones, Paul McCartney and Bryan Wilson continue a pointless and uninspired career path. Syd Barrett was an original while he lasted and he’s remained an inspiration. Let’s celebrate that.