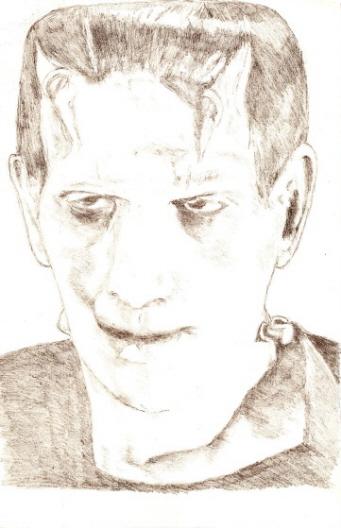 ‘Tis now the time for witches and black cats, ghoulies and ghosties. Darkness has fallen, the children are asleep, and I sit beside a crackling fire to reveal my list of top ten scary things…

I remember this as being very scary. There are two episodes that really frightened me at the time. One of them, particularly Halloweeny, was about a witch from the past appearing periodically to torment a man in the present day. As you might expect, nobody believes him, least of all his wife who is quite upset about the scratches on his back! I watched it again when the series was repeated on good old ITV3 last year and it wasn’t as chilling as I’d remembered aged 13. So I’m picking another from memory that was called something like The Two Faces of Evil…

This one started with a family who pick up a strange hitch-hiker. He turns out to be a crazed maniac (I’ve never picked up a hitch-hiker in my life because of this) who causes the car to crash and for all the family to end up in hospital. The madman dies but the family all recover, although the wife begins to suspect that the dead man is really her husband while the man at home (who’s now acting slightly oddly) is an evil imposter…
Very creepy.

From the old Doctor Who I remember The Sontarens scaring me. It was the Jon Pertwee era, and a story set in medieval times. Lots of medieval tomfooloery that wasn’t especially frightening, but an episode ended with the first glimpse of the Sontaren face. And then that music…and then, although scared, I was very excited as I waited for the following Saturday…
Later, in the Tom Baker era, The Brain of Morbius was very dark and disturbing. There is something very very nasty about a talking brain in a jar…

From the new series I found the episodes with the child in the gas mask very effective (The Empty Child). But my daughter finds Who too scary and won’t have it on. “There’s the fireplace”, I say, “position yourself behind it”, but she won’t listen. You can’t even mention Daleks or Cybermen in our house. We’re only allowed to watch Robin Hood. Bah.

The BBC adapted many of James’ short stories for their Ghost Stories for Christmas series. A new film was made every year during the 1970s and repeated every Christmas well into the 1990s. BBC Four started to show them again a couple of years ago, made a documentary and have now revived the series, with a new adaptation being shown last year.
I was too young to see them first time round, but have lapped up the repeats and read the original stories. The ghost stories of M.R. James all share the same theme. The curious minded (one of the stories is actually called A Warning to the Curious), usually academics or archaeologists, uncover or steal something that is best left untouched. Causing something sinister to come after them…

My favourite, although made just before the BBC started A Ghost Story for Christmas, was called Whistle, and I’ll Come to You. It stars Michael Hordern as an eccentric old professor who finds a whistle by an ancient grave whilst on a walking holiday. He decides to take the whistle and… well you can probably guess that this turns out to be an unwise move. Professor Hordern ends up very haunted indeed. If you haven’t seen it please try to, and you’ll be surprised just how scary a ghostly figure and a deserted windy beach can actually be.

Worth catching: there’s a very scary 1950s film called Night of the Demon, which is based on a James story.

Tales From the Crypt (1972 film directed by Freddie Francis)

A couple of years ago, a friend of mine reminded me of this obscure, early 1970s horror compendium from the giants of such films, Amicus. He’d remembered seeing it in his youth and how particularly frightening one part of the film was which featured the actor Ian Hendry.

In Tales from the Crypt, several actors who you would expect to appear to find in such a film embark on a tour of some caves: the likes of Joan Collins, Nigel Patrick and Ian Hendry. Their hapless guide, played by Geoffrey Bayldon (would you let Geoffrey Bayldon lead you into some caves?), manages to lose all of them. They stumble on blindly and eventually enter a particularly cavernous part of the caves to come face to face with a sinister Ralph Richardson dressed as a monk. He proceeds to gleefully reveal to each of them the grisly fates that they are about to befall…

Ian Hendry’s segment is called something like Reflections on Death and is above average for such a film. He plays a man who decides to leave his family for his mistress, becomes involved in a car crash, walks away from the burning wreckage and returns to his former home to be greeted by screams of horror from his wife and children. He then visits his mistress, now blind, who tells him that he must be mistaken because her lover died in the crash. He glances down at a glass coffee table to see the reflection of his burnt face…

It’s genuinely creepy partly because Hendry plays the whole thing straight. The Amicus films also usually had modern settings, so we have modern flats with lifts instead of castles with staircases and this is also, somehow, unsettling. The music is also very good and conveys a genuine sense of unease.

The film was recently shown in a late-night slot and, thinking of my friend, I taped it and gave him the cassette. I wrote ‘Ian Hendry’ on the box and this was all it took; he looked at the tape and looked at me like he had just seen the reflection of a ghoul in a glass coffee table. He thanked me, but somehow I knew that he would never watch it…

Tales From the Crypt and other films from Amicus (like The Vault of Horror from 1973) took their stories from American horror comics. I remember a second-hand bookshop in Tooting Broadway that used to sell them. It was run by a man with a woolly hat and a beard who would have a specific section for the American horrors. This was a couple of years before 2000 AD came on the scene, so American comics were still miles ahead of the British ones. Always in full colour, with grisly drawings of corpses rising from graves to wreak their vengeance. Usually on their former employers, I seem to recall.

There was also a brand of comics with titles like Creepy Worlds and Eerie Tales which specialised in science fiction and horror stories. For some reason, they were only available to buy in seaside towns, so I always associate these scary comics with holidays and being scared in caravans and chalets.

When I first saw The Wicker Man I thought to myself “people dancing about on a Scottish island? That’s not scary!” but this film builds up splendidly to its shocking ending. Just in case you haven’t seen it, I won’t reveal fully what happens, but this line still sends a shiver through me:

Come. It is time to keep your appointment with the Wicker Man…

Wicker Man urban myth: reels of the film are buried under a motorway somewhere.
Wicker Man truth: Christopher Lee always says this is the best film he appeared in.
Wicker Man no-no: the Nicolas Cage remake.
Wicker man argument I am prepared to make: The film’s ending is the scariest ever. No rescue and no way out.

The most recent horror film that I’ve found scary. We lived on the edge of a wood at the time of its release onto video, which didn’t help. Like The Wicker Man, another no way out film.

The Woman in Black (stage play, 1988, adapted bt Stephen Mallatrat from the 1983 novel by Susan Hill)

A very effective play, which I went to see twice. Still running in the West End, unless I’m mistaken. There’s a bit where a ghost creeps onto the stage and screams, and the other actors scream, and you all end up screaming.

Roald Dahl would sit in his chair by the fire at the beginning, rather like I am now. His urbane introductions were always the most frightening part for me. Good old ITV3 are repeating Tales of the Unexpected as we speak, and they’re pretty dire to watch now, although the Dahl introductions are still very good.

Around the time that Tales of the Unexpected started, I was finally allowed to stay up late at weekends. I remember a season of horror films being shown on Saturday nights which ran through the whole Universal canon: Frankenstein, Dracula, The Mummy and The Wolf Man. A great introduction to horror, but this is about scary things rather than just classic horror films (which will give me an excuse to do a horror meme some other time).

Another TV series from my childhood. The most frightening thing about it was the music. A sort of unearthly, disturbing sub-human choir. I rented Children of the Stones recently on DVD when my wife and daughter were away for the weekend. I can honestly say that I found the music still scary.

There were a lot of creepy programmes on children’s television in the 1970s and many of them, like this one, were concerned with stone circles and all things pagan. Teatime terrors, which is very satisfying for a ten-year-old.

That’s my Halloweeneememe then. Ten scary things, although I’ve just counted eleven. I’m sure it was ten to start with. How scary…

Further information on all of the films, series and actors I have mentioned can be found on The Internet Movie Database.
Outpost Gallifrey. This is the Doctor Who site, where you might occasionally find reviews by your truly…
2000 AD. Official website.
Ghosts and Scholars. M.R. James website.
The Woman in Black. Official website.
I can’t find a decent website about American horror comics…

BBC Four are showing a new adaptation of Dennis Wheatley’s The Haunted Airman tonight. Later there’s a choice between John Carpenter’s classic Halloween on BBC1 and the 1979 Dracula with Laurence Olivier on Channel 4. Silly, but notable for its Cornish location of the Camelot Hotel in Tintagel which I recently visited at the beginning of my Hallowe’en frenzy.