It’s Harry Potter time again. David Yates directs his third film in a row for the series, with the final part to come in 2011.

The first part of Harry Potter and the Deathly Hallows peaks very early in its two hours plus running time. This is where Lord Voldemort (Ralph Fiennes) holds a get together for the Death Eaters. Seated around the table are Severus Snape, Bellatrix Lestrange, the Malfoy family and other assorted black clad baddies. You can almost smell their fear of the boss. I’ve been to some pretty grim team meetings in my time but nothing quite like this. It translates very clearly and very succinctly the terror of Lord Voldemort, even from his supporters, that runs through all of the novels.

Tellingly, this very effective scene does not feature Daniel Radcliffe, Rupert Grint or Emily Watson. And I was unable to hide my general disappointment with the film as, more than any other of the Harry Potters, we are constantly teased by tiny cameos from great actors. Fiennes, impressive as Voldemort, is hardly in it at all. Bill Nighy is magnificent as the Minister of Magic Rufus Scrimgeour but appears only briefly. Equally good is Rhys Ifans as Xenophilius Lovegood, but he’s wasted too with a very brief amount of screen time. Elsewhere other actors make far too fleeting appearances; John Hurt, Timothy Spall, Brendan Gleeson, David Thewlis etc. The true list is sadly much longer than this. The viewer is used to this in the series, however the film lacks any weighty presence at all from a distinguished British thesp; no Michael Gambon or Maggie Smith to hand out words of wisdom. And whilst Alan Rickman does feature a little we miss his trademark sneering at Harry. In his absence I caught myself sneering at him once or twice instead. 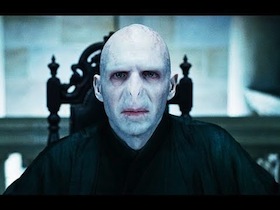 But it might be best to reserve proper judgement on Harry Potter and the Deathly Hallows for when the second and final part is released. In setting the scene for the big finale, the seventh Harry Potter movie runs the risk of being uneventful and empty. But that’s what the book is like, fans may argue. True, but some fans may be expecting more. Some may even feel shortchanged by this half of a film. But we’ll reserve judgement for now.

So what happens in this film – and, more to the point, if you haven’t read any of the books do you stand a hope in hell in actually following any of this? Well probably not. In the first of the films not to feature Hogwarts, our heroes appear strangely misplaced throughout The Deathly Hallows, awkwardly stolen from the usual sequence of term events that they’re used to. On the run from the Death Eaters, they spend much of their time hanging around in a forest literally twiddling their thumbs. Don’t fret Ron, I’m sure I heard Harry say, this will all be over by next July when the second part comes out and things really get going. Harry, Ron and Hermionie have too much time on their hands, pondering their fate in the open air. It’s beautifully filmed, and there is a wonderful sequence with Harry and Hermione dancing, but the younger viewers will find this instalment dull. And my younger viewer in tow informed me so.

Although it’s unfair to say that the film is a damp squib, and there are some excellent set pieces that you would come to expect from a Harry Potter film. The scene where some unwelcome nasties gatecrash a wedding is very good, as is the sequence where Harry and his chums break into the Ministry of Magic disguised as adults which is one of the best episodes of the series. And the cartoon sequence, that explains just what the Deathly Hallows are all about, is a visual treat. It’s just that I expect more from the acting talent on hand, and the likes of Fiennes, Nighy and Evans were truly wasted. I also feel, and I’m really, really, sorry about this, that the whole franchise has dragged on for too long. And Lord V. really ought to do something about that nose.