It isn’t that I’ve ignored films this year (the last post for 2010 Cinema was way back in May), it’s just that I’ve hardly found anything to rave about. Watching new films has recently become something of a chore, and I’m sadly resigned to regular disappointment. Things picked up spectacularly this week with a British film I’ve been dying to see for some time. The Disappearance of Alice Creed is written and directed by J. Blakeson and features only three actors, Gemma Arterton, Eddie Marsan and Martin Compston. This is an intense thriller, and although at times the acting jumps into the gear of melodrama it succeeds very well in delivering a series of twists, turns and incredibly gripping moments. It’s probably going to end up as my film of the year. 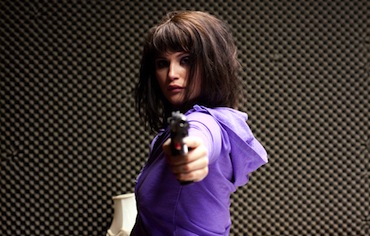 The premise of the film is relatively straightforward, where two ex cons meticulously plan and execute the kidnapping of a millionaire’s daughter. We see them wordlessly choosing the tools for their scheme in the film’s opening as they purchase soundproofing from B&Q. Such a mundane activity with a particularly disturbing background. From here they put together a cell for their victim, and following the swift abduction the film appears to be settling into some rather unsettling territory when Creed is routinely stripped naked, gagged and bound by her captors. But Blakeson reveals a talent for debunking the viewers expectations; the film slips more comfortably into the interaction between the three leads.

The older of the two men is Vic, and Marsan plays him as edgy and monosyllabic. His true relationship with the much younger Danny (Compston) is slowly unravelled throughout the film. Danny’s own mixed motives form a pivot for much of the drama, and never has the repeated flushing of a toilet provided so much tension on screen. Gemma Arterton as Alice has possibly the toughest role, having to convincingly portray fear and strength in equal measures, although she largely pulls it off. At times in feels like all three characters have been weaned in a world where the goings on in Reservoir Dogs and Shallow Grave are the norm, although I guess that suspension of disbelief is the key.

And The Disappearance of Alice Creed held me for its full 90 minutes. Possibly I was slightly let down by Marsan, who appeared to deliver a somewhat lazy performance, but maybe I’ve grown to expect too much from this normally excellent actor. But it is still a far above average film. The ending in particular is superb, where Alice almost breaks the fourth wall by meeting the viewer’s eye. I don’t want to give too much away but all, perhaps, ends well.