At that moment, I sensed I was not alone. 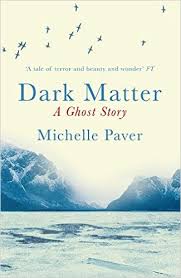 Would you like to be scared? I think I have the solution. Dark Matter is an intriguing ghost story and one perfect for the run up to Halloween. Michelle Paver weaves a delightfully spooky tale with a 1930s Arctic setting, the background of intense cold and lack of daylight very fitting for a story dealing with loneliness, paranoia and fear.

Dark Matter takes the form of the journal of Jack Miller as he joins an ill fated expedition to the remote bay of Gruhuken. He’s an edgy young man, conscious of the class distinction between himself and his fellow adventurers, and at first finding himself unable to establish any affinity with them. Paver plays on this well, with Jack picking up on the slightest tension which sets the reader up for what’s to come, where an overactive mind is left to work a touch overtime.

At first it all appears to be familiar territory of the ghost story. The expedition charters a boat and the Captain is reluctant to take them all of the way; there’s something unspeakable that happened at Gruhuken. Eventually arriving, the crew try to dissuade them from tearing down the encampment of previous settlers. There’s a distinct aroma of folklore and superstition. In the midst of this Jack thinks he has encountered a ghost, and whilst reasoning that a ghostly apparition can only frighten and not harm, he struggles to keep his thoughts rational.

Paver is successful in making this a gripping story in how Jack’s narrative is so convincing. She’s visited the Arctic herself, and so the description of it is rich, varied and believable. But what’s most arresting is that no matter how Jack attempts to rationalise events the reader can taste his increasing fear, and fear in a narrator works extremely well in stirring the same in the reader. A series of problems leaves Jack alone at the camp, where he attempts he attempts to keep isolation at bay by following a strict regime, exercising himself in the bitter darkness and attending to his dogs, his only living companions. But the rot of fear sets in, and he begins to succumb to his imaginings and compulsive desire to look out of the window…

This is an engaging and scary novel that’s highly recommended.