I very much enjoyed my first taste of China Miéville, the highly original The City and the City. This novel was billed as an existential thriller with shades of Orwell and Kafka. There’s some truth in this, although what impressed me most was the sheer originality and imaginative scope of this book . 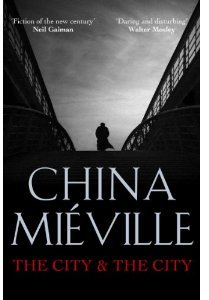 Set in the fictional city of Besźel, the body of a murdered woman is discovered and a detective, Inspector Tyador Borlú, is dispatched to investigate. So far very run of the mill, but Miéville cleverly drops subtle hints that this is going to be far from an ordinary whodunnit. Firstly, we begin to learn of a sister city to Besźel called Ul Qoma. Citizens of each are forbidden to associate, even to look at, one other. Failure to follow this doctrine strictly results in breach, with perpetrators investigated by a sinister body known as The Breach. Miéville begins to unravel a very complex and often challenging premise, daring the reader to keep up with him. It’s this aspect of The City and the City that I enjoyed, whenever you pause for breath this author just keeps running ahead of you with fresh ideas and twists.

The twins Besźel and Ul Qoma and the complexities that result from their division are at first reasonably acceptable. However, as Borlú tentatively begins his investigation, it slowly emerges that citizens of each are not just expected to avoid a neighbouring city. The two inhabit each other; more – they are one and the same from the eyes of a casual – or uninitiated – observer. Streets from each city intersect, even at times forcing traffic to avoid, or “unsee”, traffic belonging to the other city. The act of “unseeing” keeps the respective citizens suitably fearful and repressed. Miéville slowly unravels this ambitious conceit, creating further intrigue when Borlú’s investigation leads him to visit Ul Qoma, unseeing everything he’d previously become accustomed to.

The murder story at the heart of The City and the City is at times overblown and unnecessary, and Miéville is over determined to solve the mystery for us. What’s most impressive is the novel’s extraordinary premise and setting, this odd take on an alternative Eastern Europe, with the close of the book particularly satisfying. Torn between the twin cities, there is only one place that Borlú can go, and his final realisation of this is deftly handled.