What defines a truly scary film?

I’m not talking about great art in cinematic horror, which I think is different. Kubrick’s The Shining and Polanski’s Rosemary’s Baby are both artistic achievements, but I wouldn’t say that either scared me. I’ve watched them both countless times and can pick out many memorable aspects of them; Jack Nicholson’s masterful performance, Kubrick’s slow and deliberate direction, Polanski’s sheer cleverness in making a fantastic story believable. Both directors are also groundbreaking in using the modern setting for horror. But the films don’t really scare me; I love them just for the brilliant pieces of cinema that they are. 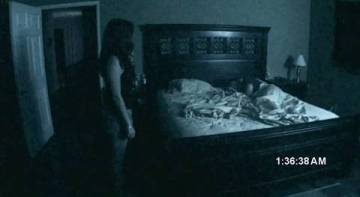 Katie and Micah are a fairly ordinary suburban couple. It’s the apparent ordinariness that makes this film so effective, particularly in the nondescript house where all of the film is set. Micah is intent on filming life at home. Some of this results in Blair style shaky handheld effects, whilst the rest of his footage comes from the hours of night vision photography taken in the bedroom. The double bed, the large white open door and the stop motion film as they toss and turn throughout the night. Why is he doing this? Katie believes she is being haunted, Micah believes he can solve the problem.

Director Oren Peli impresses in how the tension of this film very gradually cranks up. There’s one scene where a psychic, who appears at the beginning, is called again when things begin to turn bad. He senses the terrible atmosphere in the house and backs away, unable to help. It’s that sense of awful oppressive danger that comes across so well. Partly it’s to do with claustrophobia, the relatively tight setting of the film, but the build up is done so effectively. At first, the night footage reveals nothing more than noises coming from downstairs, although this in itself is disturbing and did cause me an ears-awake sleepless night after viewing this film. Perhaps one of our greatest fears is as simple as the concern about the creaks and unexplained movements we perceive going on around us during the night.

Peli works wonders with only a small set of tools. Most of the results are economically chilling. The noises downstairs. The bedroom door, seen to move on its own when Micah surveys a night’s footage. Katie’s sleepwalking, where she is revealed to stand in the same position for hours at a time. The experiment with talcum powder sprinkled on the landing, exposing far from human footprints. And so on. Like the psychic, the audience begin to sense the awful oppressive air in the house. Unlike him, they probably won’t want to leave it, bearing things out to their horrible end.

I came to Paranormal Activity fresh, not having read any reviews and knowing nothing of the plot. This is the way to approach it and I won’t give anything more away. Suffice to say that I was scared. A rarity. An unusual film indeed.

This movie frightened me. I watched it alone and was almost blubbering. Then I couldn’t sleep. I kept imagining an invisible hand lifting my foot up and pulling me off the bed.

Similar for me but worse. I was imagining an invisible claw.

I agree. The film was much more effective in evoking a mood of fear than (say) BLAIR WITCH. A good’un.

A truly scary film would be a feature length production of any of these:

Dorothy – the search for a musical star

Under the Arches – the Phil Mitchell story

I’m sure you would agree ;)

With Phil Mitchell you could place a simple camera in his house and record him ranting at his increasingly disturbed son. Very frightening.