He didn’t want to look into its face. He’d expected the eyes to be closed, but they were open. Staring up at him. The sockets beneath were black. Impulsively he tapped on the glass. 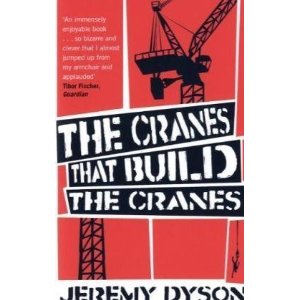 Random internet searches on The League of Gentlemen will return unsurprising descriptions of the television series; bizarre, macabre, mad, surreal, eccentric, weird and demented are some of them, although my favourite is probably the single word brilliant. Yes, I was a big fan, although a decade on I’d almost forgotten about them. So discovering the writing talent of Jeremy Dyson (the fourth, non-performing, member of the team) was an unexpected joy.

Dyson’s writing will appeal to any admirer of The League of Gentlemen, although he’s moved on from comedy to deliver The Cranes That Build the Cranes, a collection of nine short stories that have a sinister flavour to them. It follows Never Trust a Rabbit, an earlier collection, although in comparison Cranes is a much more accomplished and impressive book. Dyson has moved, and I hope is still moving, into the league of truly great writing.

Most impressive are The Coué, quoted above, and Michael, two modern horror stories that deserve to become classics of the genre, forever reprinted in terrifying anthologies. Other stories reveal Dyson’s weird and inventive imagination; Yani’s Day defies description in its fresh originality. His writing has sometimes been described to Dahl’s adult stories. There are similarities, but don’t expect neatly executed tales with a twist. Quite often Dyson leaves a lingering doubt, where you are left checking the shadows behind you. Highly recommended.

So impressed with this, I sought out his 2006 novel What Happens Now. It’s a well written book that reminds at times of Jonathan Coe, and after dragging slightly at the halfway mark emerged as a truly great piece. Dyson ties up his deliberately loose threads and themes with great skill; this is a thought provoking book about action and inaction, and the consequences of trying to right terrible wrongs when it’s far too late. It delivers a terrible irony in its closing pages, and I found it a powerful meditation on, as you might expect, the bizarre and the weird aspects of life. But all done brilliantly.