He shrank back still further, darting furtive glances in my direction. Then, while I stood there trembling, not knowing what else to say, he half opened his mouth.
He emitted from it a gurgling sound similar to those uttered by the strange men on this planet to express satisfaction or fear. There in front of me, without moving his lips, while my heart went numb with horror, Professor Antelle gave vent to a long-drawn howl.

Pierre Boulle’s Monkey Planet is the 1963 novel that was later famously filmed as Planet of the Apes. I was lucky to get hold of the 1966 Penguin paperback, the artwork quite chilling and predating the later editions that suffered a title change and were usually adorned with images from the series of films that were released between 1968 and 1973. Boulle’s novel makes an interesting read; comparisons with the films are obviously unavoidable but it differs enough to remain interesting in its own right. 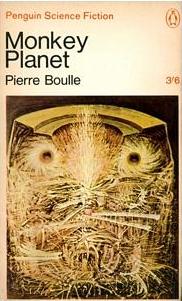 Monkey Planet uses a framing device for its story, where a pair of space travellers called Jinn and Phyllis find a interstellar message in a bottle. The bottle contains a transcript by a French journalist called Ulysse Mérou who describes his journey across the galaxy with two scientists. Landing on a distant planet which they name Soror, they discover an Earth-like world inhabited by primitive, mute humans. Mérou is initially attracted to a female, who he names Nova, although they are soon disturbed by the humans being hunted by seemingly intelligent apes. One of his companions, Levain, is killed in the attack and Mérou finds himself captive in a world populated by talking gorillas, chimpanzees and orangutans who dispute his claims to be an intelligent being. He is caged and made to mate with Nova before befriending two chimpanzee scientists Zira and Cornelius and eventually reasoning with his captors and winning his freedom, although he also learns that his other fellow traveller Professor Antelle has degenerated into a savage and has been placed in a zoo.

Mérou is asked to visit the excavation of an ancient city where an intact human speaking doll is uncovered. Further investigations lead him to realise that Soror was once like Earth, but over the course of thousands of years the apes rose to become the dominant species – although not actually advancing any further that their human predecessors. He also learns that Nova has given birth to his son, a seemingly advanced human, and these events lead Cornelius and Zira to engineer his escape back to Earth, along with Nova and the child. The journey at light speed means he returns to Earth at a point thousands of years after he originally left. Upon his return he is greeted by intelligent apes. Like Soror (Latin for sister), Earth has succumbed to the same evolutionary process…

The novel ends with the closing of the framing story where Jinn and Phyllis are also revealed to be intelligent apes, and they dismiss Mérou’s account as fiction.

Oddly, Boulle’s ending for Monkey Planet, where Mérou returns to a hideously altered Earth, owes more in common to Tim Burton’s 2001 remake of Planet of the Apes than it does to Franklin J. Schaffner’s 1968 original. Whilst the image of Charlton Heston (Taylor) finding the ruin of The Statue of Liberty is an iconic one, Boulle’s ending actually works best for me (which is odd, as Burton’s finale was fudged and ineffective). Boulle’s twist is quick and terrifying, and is somehow more convincing than Taylor’s predicament; whilst Taylor is angry with humanity Mérou’s mute shock seems to hit hardest. It is an ending in keeping with the novel, where humanity literally loses its voice.

Many of Boulle’s themes surfaced throughout the Apes franchise as it rolled on through four film sequels, further novelisations, a Marvel comic, a live action and a cartoon tv series. For example the master/servant relationship slowly being turned around, which is a theme of Conquest of the Planet of the Apes. There’s also the class system of the three species of ape, personified by the military gorillas, the sceptical orangutan Dr Zaius and the kindly and affectionate Zira and Cornelius.

Pierre Boulle is best known for Planet of the Apes, although he also wrote Bridge over the River Kwai and apparently gave the shortest acceptance speech ever for it at the 1957 Oscars (“Merci”). He also wrote a film sequel called Planet of Men, although it was turned down and it is unclear how much it resembles the dark and depressing Beneath The Planet of the Apes which became the second film in the series. Planet of Men suggests something similar to the third film, Escape From the Planet of the Apes, where Zira and Cornelius return to 1970s Earth. And it is the birth of their child that sets off the paradox of events…

I’m pretty sure it was the Statue of Liberty, not the Empire State Building.

Great review – I’ve put the book in my wish list.

Yes you are quite right it was the Statue of Liberty not Empire State Building! I have corrected this.