Mesrine was released in UK cinemas in 2009 and is now available on DVD. This four hour biopic of the French criminal Jacques Mesrine is divided into two parts, Killer Instinct and Public Enemy Number One. Roughly, the films cover Mesrine’s life in the 1960s and 1970s respectively and while both do differ in tone it is highly recommended that they are viewed in quick succession. Indeed, I found Mesrine so superb that I think this would be difficult to avoid. Vincent Cassel is excellent in the title role; mesmerising, frightening, sickly charming and most importantly believable as a ruthless – well, bank robber, gangster, political activist, kidnapper, cold blooded killer. Take your pick. 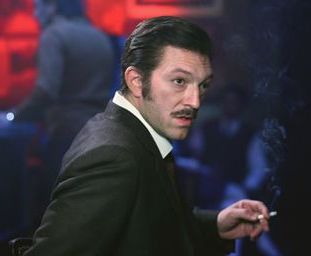 Beginning in 1959, when the young Mesrine was a soldier in Algiers, the films follow him until his death in 1979. I’m not giving anything away here; Killer Instinct begins at the end as it were – in 1979, where Mesrine is followed by police and assassinated in the streets of Paris. It’s an incredible opening, extremely tense, and adds much to the effect of the end of Public Enemy Number One, when these events are chillingly replayed. The opening of Killer Instinct also hints at Cassel’s ability to play a man who ages two decades; he manages to convey both the physical and behavioural changes that happen over this time.

Killer Instinct charts Mesrine’s blossoming life of crime, beginning with his early rebellion against the constraints of his middle class family, to involvement with criminal lowlife and association with a powerful crime boss (a fine cameo from Gerard Depardieu). Mesrine’s relationships with others play very heavily throughout the two films. As the soldier in Algiers, we see him forced to execute a woman who is one of a group of prisoners. Hesitating, he kills her brother instead – an early sign of his insurgency and of his attitude to women. One that’s open to interpretation. Later, when his wife questions his growing association with the underworld, he lashes out and puts a gun to her head. It’s difficult to determine if this is purely bravado in front of his friends or something much deeper. Throughout the two films Mesrine finds it hard to differentiate between prostitutes and partners; he often confuses the two. If I had one criticism it would be that his relationship with his daughter, who is only glimpsed briefly, is never fully explored. But maybe in reality her presence in his life was only this fleeting.

Public Enemy Number One catches up with Mesrine as France’s most notorious and wanted criminal, escaping from countless prisons, fleeing from one courtroom with a hostage judge and charming the jury of another, almost a Robin Hood figure although the film is smart enough to gently remind that this isn’t really true. In one section, he forces a family to smuggle him away in the boot of their car after he has burgled a casino (he’s had the audacity to pose as a policeman to do this – audacity is what made him so successful for so long; in another scene he insists that the detective arresting him share a bottle of champagne). Towards the end of Public Enemy Number One he is shown violently abusing a journalist who has had the temerity to crriticise him in an article. Like all folklore villains, Mesrine reveals that his own selfish interests lie at his heart; he may be ostensibly charming but overstep the line and you are in trouble. And remember, it’s not “Mez-rine” it’s “Merrine”. He was very touchy about the pronunciation.

Cassel is a fascinating actor to watch, although by no stretch of the imagination handsome. Where Killer Instinct accustoms the viewer to his – let’s be kind here – distinctive features, rather large of nose and thickly moustached. the second film shows Mesrine as the master of disguise he became in a life on the run. A variety of wigs and beards ensue which again lead neatly to the assassination scene (where Mesrine is fashioned with a goatee and thick curly hair). Thankfully, the films don’t overdose on period detail in a way that, perhaps, Martin Scorsese would do, and the only excess I noted was Mesrine’s brief tenure in London shortly before his death where the soundtrack plays London Calling by The Clash and we’re shown amiable bobbies in Hyde Park. But mostly it refrains from romanticising the period 1959 to 1979.

Although highly watchable, Mesrine is by no means an original film. It unashamedly takes elements from The Godfather, Escape From Alcatraz, Papillon, Goodfellas and countless other memorable examples of the crime genre. At times it looks like it’s going to lurch into cliché but somehow always manages to remain interesting. One example of this is Mesrine’s time in a high security jail. His period in solitary confiement, stripped of all dignity, will be familiar to moviegoers, as is the archetypal exercise yard scene. This is where the lead actor, Steve McQueen, Clint Eastwood, Tim Robbins or in this case Cassel, step out into the bright sunshine of the prison exercise yard. Inmates wear denim shirts. Some play basketball, while others huddle around making deals or squaring up to one another. At least one is huge, bald and bearded. Wardens watch from high towers, training their sights on troublemakers. Mesrine plays to all of these cliches but somehow manages to make this fresh and exciting. The scene where he escapes armed only with a pair of wire cutters is one of the most exciting in recent cinema, as is the section where he attempts an ill-judged rescue attempt for inmates in the same prison.

I don’t feel sorry for Mesrine, although the film concludes with an interesting point and one made by the criminal himself. So smart, so fearless and so able to evade capture, the only choice for the establishment was to gun him down. Somehow this is unjust, that the authorities gave up attempting to catch and imprison him and took the easy option, were cowardly and cheated. And Public Enemy Number One ends with the impression that the police were well aware of this failure, and would have to always live with it.