The Unnamed by Joshua Ferris was almost a novel I passed on. I had mixed feelings about And Then we Came to the End which, although revealing some excellent writing, was ultimately an overlong and slightly messy book. But I was swept up in the tide of eager anticipation that came with Ferris’ latest, and some comparisons to McCarthy and Beckett had me reversing my decision and placing my order. 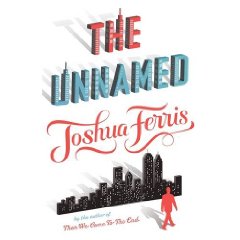 I’m glad I did. The Unnamed is the best novel I’ve read this year. It’s possibly the best novel I’ve read since The Road. It’s a book that somehow evades evaluation by me on the page; I find it difficult to articulate what I liked and admired about it, also hard to explain what the novel is about. Ferris has matured as a writer immensely, and has delivered something that surprises in its depth and insight when compared to his previous work.

If I was forced to outline The Unnamed? It features an American lawyer with a young family who battles a compulsion to wander. The urge to cover long distances in an often inhospitable landscape takes over; he leaves home and wakes up in a succession of remote and unattractive settings. Cold, filthy and often in danger, he call his wife. She brings him home, but the safety of the home only reminds of what his uncontrollable urges will force him to abandon. His condition avoids any diagnosis; briefly he agrees to wear a contraption that will monitor the functioning of his brain, although this fails to provide a solution to the doctor he increasingly loses faith in. His wife resorts to the more desperate strategy of chaining him to a bed. As the urge to walk begins to take over his existence, working life sees the crumbling of a case where an apparently innocent man is imprisoned for murder. His wife descends into alcoholism, finding isolated bars to drink in anonymity.

At times The Unnamed appears as Man’s migratory spirit writ large, and the later chapters are painful as the wandering dominates, forcing us across an increasingly bleak landscape. At times it suggests more than it is willing to explore; a desperately bleak winter, floods, scorching summers and mysteriously dead bees are almost apocalyptic – not as fully fledged as The Road but almost a precursor to it. It is a novel I recommend highly; bold, daring and original.