Percy Jackson and the Lightning Thief is an okay film. Alright, it’s quite a good film. As long as you don’t equate originality with quality, and don’t mind making a mental note of all the Harry Potter comparisons you will inevitably find. This film is very much School of Harry Potter, and gets tops marks for the Hogwarts Formula module. The Hogwarts Formula module is a course that teaches the following bullet points for success in creating a Potter clone:

And so on. Rick Riordan’s Percy Jackson has an advantage over Harry Potter in that it weaves Greek mythology into its universe, this giving the opportunity to use recognisable stories (whereas Rowling writes herself into a corner where she is forced to invent everything from scratch). Percy Jackson and the Lightning Thief features a host of Greek Gods played by English actors, including Sean Bean (Zeus) and Steve Coogan (Hades) and a good share of mythological monsters, the best of these being Medusa (played rather well by Uma Thurman). The film gives an excellent take on the Medusa tale with Percy using the back of his iPhone to deflect the deadly gaze of the serpent-headed one. Similarly, the story of the Lotus Eaters receives a modern treatment when the gang go to Las Vegas. 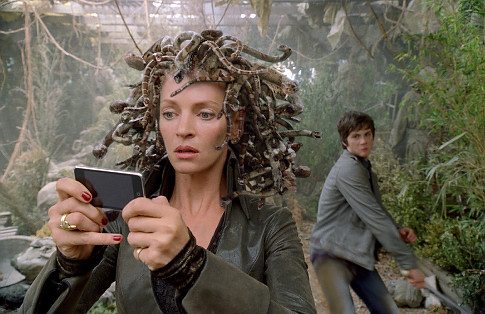 Percy Jackson and the Lightning Thief is driven by an obvious plot that is nevertheless still enjoyable. Percy’s mum is kidnapped by Hades, he must travel to the Underworld to rescue her but must first find three pearls that will get him and his friends back safely. There’s an obvious villain, and so on. Where this film doesn’t have an advantage over Harry Potter is in that is rather too cynical in taking up the Hogwarts Formula module. There aren’t enough strong supporting players (no equivalent Hagrid or Snape, for example) and, whatever you think about Harry Potter, it does have buckets of enviable charm which is beyond any formulaic approach.