Attempting to review Avatar is a somewhat pointless exercise. The film achieves what it sets out to do; namely becoming a piece of cinema that shows off its great expense whilst – mostly – also being an example of supreme entertainment. And, although I don’t particularly go along with the view that 3D is the future of film, it does push movie making further than its ever been pushed before. 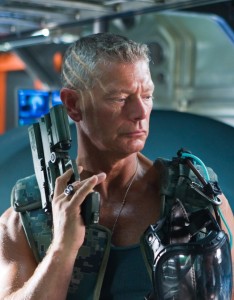 My eleven year old daughter gave Avatar nine out of ten, subtracting a point for the overblown and tiresome battle scenes that occupy the last part of the film. For the same reason I will give it eight out of ten, deducting two points for each of the headache tablets I had to take afterwards. It’s at the end of the film that James Cameron lets himself down, reverting to type as the gung-ho director of The Terminator and Aliens. This violent streak is personified by the gun-toting (and cigar chomping, although I may have imagined that), muscly, military baddie Colonel Quaritch. Quaritch (played by Stephen Lang, who doesn’t unflex a muscle throughout the film) is the kind of kick-ass macho man who makes Rambo look rather shy and withdrawn. At one point he leads the attack on the aliens in the film with the words “we will fight terror – with terror”. I laughed, but nobody else did in our 300 strong audience. Which is worrying.

It’s a shame that aspects of Avatar are easy to mock because at times it is a great movie. The attention to detail of the alien planet Pandora is breathtaking. The sounds, the plantlife, the animals and monsters, the sheer size and depth of the gigantic forests. This is helped by the 3D element, although the films shows a painstaking care in imagining a very different world to our own. Into this is thrust Jake Sully (Sam Worthington), a disabled marine who “becomes” one of the aliens, the Navi, for short periods by way of linking with a genetically bred Navi or “avatar”. This sets the film up rather cleverly, with Jake switching between the real world of familiar Cameron claustrophobic army space-bases (Sigourney Weaver also features to make you feel at home) and the almost dreamlike world of Pandora.

Waking when the Navi sleep, Jake records an increasingly bleak video diary where reality shrinks and the wonder of the alien world remains vivid to him. Sadly, Cameron doesn’t really explore the dream element as much as he could have done. Early in the film, Lang tells the new recruits that they’re “not in Kansas anymore”, although the reference to The Wizard of Oz is probably only a coincidence. Avatar also reminds of the lesser known The Fountain, which used the form of the tree for more symbolic purposes, but Cameron has a plot to get on with, where the human interest in Pandora is made very clear and the two species and worlds clash in a very ugly way. Although Avatar is generally a sci-fi Western (think Dances With Wolves in space), with the Navi the Indians facing genocide by Lang’s Cowboys, the Cowboys in this case are mining the Indians out of existence, with a valuable mineral that will save the dying Earth sitting right within snatching distance.

Like many a Western where the outsider is accepted by the Indians, Avatar features the typical series of initiation ceremonies. But this being alien territory, Cameron uses his imagination to great effect. Pandora is a nauseatingly vertiginous planet, with Jake racing across narrow and entwining sky-high branches to keep up with his new friends. At one point he has to tame a ferocious dragon-like creature (after first entering a particularly inaccessible region of floating mountains). The film takes an inevitable path, however, with Jake eventually leading the Navi into battle against the humans, led by Lang. Lang becomes the almost indestructible baddie typical of modern cinema, escaping all sorts of close shaves before he meets a particularly fitting and personal ending. And then there’s the obligatory robotic exo-skeleton he uses, reminding again of Aliens and now de rigeur in sci-fi (last seen to great effect in District 9).

I enjoyed it, but as I said above it made my head hurt. At getting on for three hours there’s too much 3D, CGI and branches, endless trees and branches. But Cameron’s anti-American message is interesting. Yes, the Yanks lose! Also interesting will be just how many of the film’s audience get the message.