In 1969 David Bowie was inspired to write his breakthrough Space Oddity after seeing Kubrick’s 2001. For a film full of memorable themes and moments, possibly the scenes that stay in the memory are those that involve HAL, the softly spoken computer. Duncan Jones’ Moon pays some homage to 2001 with GERTY, a machine voiced impeccably by Kevin Spacey. Jones is of course David Bowie’s son, which brings our introduction full circle and gets the oft mentioned paternity of the director out of the way.

The other science fiction film that Moon reminds of is Silent Running, both in its theme of a lonely man in space and of its simple yet striking set design. Here, Sam Bell is our isolated spaceman of the future, in charge of a mostly automated mining operation on the moon. He’s been working for three years with only GERTY for company, and communicates with his family by recorded messages (he’s been told that the live communications feed is faulty). Bell fills his free time running on a treadmill and pusuing his hobby of woodcraft. He’s woken every morning by his alarm playing The One and Only by Chesney Hawkes. There is a clue in this song.

Bell’s tenure on the moon is almost up and he is about to head home. However, he is haunted by brief glimpses of a strange woman and then, during some routine work outside the base, is involved in an accident. He wakes up being tended to by GERTY in the infirmary, but things are not quite as they should be. The computer forbids him to go outside again but, after eavesdropping on an apparently live conference with Earth (remember the live feed is supposed to be broken), he gives GERTY the slip to investigate the scene of his accident. He returns carrying a casualty; it’s another Sam Bell. 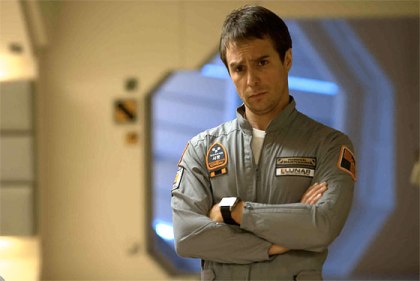 But it isn’t really giving too much away to reveal that this is a movie where a man appears to meet a double of himself. And as Bell, Sam Rockwell is a revelation. He is such a skilled performer that he appears to act with himself with ease. For the majority of the film Sam Bell interacts with another Sam Bell. It’s entirely believable and although the film plays its trump card very early, it stays intriguing throughout. Once the plight of the two Bells becomes evident the film becomes very moving in parts, and the plan the two hatch to solve their riddle is very well thought out.

Moon is likely to be my film of 2009. It was a joy to watch throughout, and Jones proves that huge budgets are not what make good science fiction. The attention to small detail, such as the post-it notes stuck on GERTY and the crude “smiley” interface used to indicate his mood, are a joy. This film is intelligent, thoughtful and brilliantly acted. And, like the very best science fiction, it stays in the mind for a long time afterwards.