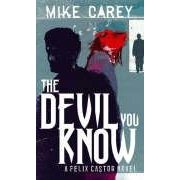 The Devil you Know is my first foray into the world of Felix Castor, the opening novel in Mike Carey’s successful horror series. The book was partly a success for me; I liked it enough to buy the second instalment of the series, although I’m holding back on the decision to invest in all five. Carey mixes a noirish thriller with the supernatural, where an alternative London is crowded with ghosts, zombies and loup garous, which are a sort of animal-spirit hybrid.

The Devil you Know has a stunning plot, which involves exorcist for hire Castor investigating the haunting of a document archive in London. Particularly effective is the novel’s opening, where Castor reveals a ghost at a children’s birthday party. It’s a well written and suitably creepy piece that wouls stand up on its own as a great short story. What lets the book down is both its length (200 odd pages of this sort of thing is great, 470 is far too much) and Castor-as-narrator with his often clichéd and grating style which can make Sam Spade sound like he’s giving a Shakespeare soliloquy. And what disturbs the most is that the living characters are as unconvincing as the dead in this novel; villains are pantomime drawn, and Castor’s associates don’t really stick in the mind.

That Mike Carey has written five Castor novels suggests that he’s doing something right. However The Devil you Know comes across as very hurriedly written, and this author does appear to bash his books out. There are some great ideas though, such as Castor’s talent for sniffing out the ghosts he’s called upon to destroy, and at times this novel is genuinely and satisfyingly scary, but Carey needs to ditch some of the well worn scenarios that appear to be grafted on for effect – for example the Dr Lektorish prisoner that Castor calls on for a chat, which didn’t add anything to the book for me. But if you like literary ghosts, then the one haunting the central story of the book will probably satisfy you. Her plight is creepy, sad and well thought out.

Shall I move onto the second instalmant Vicious Circle? Oh, go on then.

I’ve seen stacks of this book in the bargain table of a certain big-chain bookstore, but could never bring myself to buy it. You said it was cliched; I had a feeling it would be.

Interesting about the bargain table. Maybe this writer isn’t as popular as I’d thought…