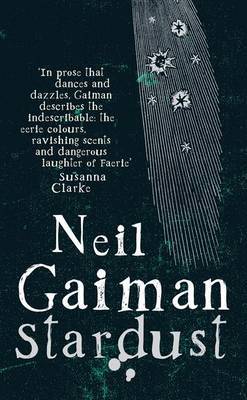 Stardust is the most charming of reads in the build up to Hallowe’en. Although a long time admirer of Neil Gaiman I have put off reading this for a while, perhaps waiting for the memories of the film to subside. Whilst the translation of Gaiman into cinema can be excellent, for example with Coraline, I didn’t find Stardust on screen much more than a fairly enjoyable romp. Its problem is that it is a little too safe, and the novel does what a fairy tale should do best – offering heaps of menace.

Like all good fairy tales Stardust is built upon a task with all the odds piled up against it. Here, a young man sets out to find a shooting star on the promise of love by a young woman. He sets out on an unlikely quest, leaving behind his home of Wall to cross into the weird and dangerous Faerie world, meeting an extraordinary array of characters all with quests of their own. His adventures end with a rather satisfying change of fortune.

The Faerie world of Stardust is an excellent companion piece to Susanna Clark’s Jonathan Strange and Mr Norrell and The Ladies of Grace Adieu. Like Gaiman, Clark can create a wonderful sense of danger in her imaginary world. Gaiman does this brilliantly at the start of the book with an innocent seeming fair, innocent at least until you have a closer look at the stalls, where one – alarmingly – trades in eyes. Like Clark, Gaiman keeps this unsettling theme running through his narrative, the world with odd rules and even odder consequences of apparently innocent actions. There is also a bizarre logic to the rules of Faerie that keeps his fantasy firmly rooted to the familiar world; Stardust is a well constructed and logical piece.

Although Stardust might appear attractive to children, there are moments that tear it away from children’s fiction – becoming just a little too adult, although this is what ultimately makes the novel far superior to its cinema version. One reservation I have is in the novel’s brevity; there just seems so much room for Gaiman to explore, and so much appears left out or truncated. For example many of the best characters, such as Lord Primus, are never fully developed. Stardust was published in 1999, and Clark later took the lead with Mr Norrell, a very lengthy and complex work which took Faerie to another level entirely.