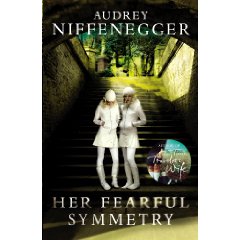 As tradition dictates that I indulge in a ghost story or two every October I thought it fitting that I picked up Audrey Niffenegger’s Her Fearful Symmetry. The novel has had some lukewarm reviews (and a particularly scathing one from The Guardian). It certainly isn’t perfect, and is nowhere in the same league as this year’s great spooky tale The Little Stranger by Sarah Waters. And although I did find it a struggle at times, the book held me quite firmly in its final chapters and delivered a particularly satisfying ending.

Niffenegger’s premise is fairly preposterous, where a dying woman decides to leave her flat to a pair of twins – the daughters of her estranged sister. If this is already sounding decidedly gothic there’s more; she’s never met them, the flat overlooks Highgate Cemetery and – when the twins arrive from America to claim their inheritance – their benefactor comes back to haunt them. This is a novel that has to be taken with large pinches of salt. But after The Time Traveller’s Wife this should be no surprise.

The reason why Her Fearful Symmetry is a tricky read has a lot to do with Niffenegger’s uninspired characterisations. Elspeth, our ghost, isn’t particularly likeable. Nor is her grieving partner Robert. The twins, Valentina and Julia, are faceless and quite indistinguishable from eachother, although as pages are turned the reason for their almost total similarity becomes apparent as part of the author’s masterplan based around themes of duality and exchange. The fifth major character is Martin, a neighbour suffering from acute OCD and trapped in his flat. We notices similarities with Elspeth, the spirit who cannot leave her own former home.

Much of the novel’s criticisms are aimed at Niffenegger making the mechanics of her novel too obvious. She is a skilled writer though not an artful one, and some of her tricks are too creaky. For example, she introduces an underaker who just happens to be a dab hand at dentistry – just to sneak him into the plot. In the same way she introduces a ghostly cat. Elsewhere she’s content to tell us things rather than show us things – we’re told that Valentina is suicidal because it helps with the plot progression. There is no real evidence that she is feeling this way at all. If it is true that all great writers show and don’t tell, then Audrey Niffenegger is far from a great writer.

Without giving anything away it is safe to say the Her Fearful Symmetry consists of three twists. The first is very obvious, whilst the second caught me off guard possibly because I wasn’t really paying attention. However, the third revelation – which happens on the final page – did suprise me completely. It’s a very strange ending, and – like The Little Stranger – an ambiguous one, which saves the book at the eleventh hour. Worth staying with so ignore the bad reviews. But don’t expect a masterpiece.