She took her hand from his shoulder. She balled her two hands into fists and punched them in the air, and from the depth of her belly she let loose a scream, a halloo, in a shrill voice like a demon. The press of people took up the cry. They seethed and pushed forward for a view, they catcalled and whistled and stamped their feet. At the thought of the horrible thing he would see he felt hot and cold. He twisted to look up into the face of the woman who was his mother in the crowd. You watch, she said. With the gentlest brush of her fingers she turned his face to the spectacle. Pay attention now. The officers took chains and bound the old person to the stake. 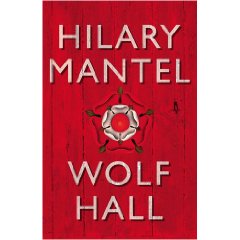 Hilary Mantel first came to my attention with Beyond Black. This is a dark and faintly disturbing novel with a supernatural premise. It’s a ghost story through and through; an unusual one of course, because Mantel is such a distinctive voice. Where the ghosts in Beyond Black are unquestionably real, Mantel keeps them just under the surface in Wolf Hall. The spirit world exists in bad dreams and warnings of ill omens, or in the hauntingly unforgettable horrors of brutal 16th century England where Mantel explores the life of Thomas Cromwell.

My opening quote is from a passage in the book where the young Cromwell is forced to watch a public execution. Violent torture and execution spreads throughout the pages of Wolf Hall. Public burnings and the discussion of horrible ends to life are familiar to Mantel’s world. And the novel is frank about this, beginning with an awful scene of brutality as it describes how the young Cromwell is beaten senseless by his abusive father. Mantel’s novel follows Cromwell’s life as he rises from these pitiful beginnings to sit in the inner circle of Henry VIII. For me, this is much more than a traditional historical book. In a recent interview Hilary Mantel explained some of the reasons for writing Wolf Hall. Whilst anyone with a reasonable knowledge of the period will know Cromwell’s place in history, his personal life has remained mostly unknown. What sort of a man was he? How did he come to be so favoured by the king?

Mantel has set herself a challenge but comes to answer these questions brilliantly, and the book’s key episode is where Cromwell seals his important and enviable bond with the king. Henry is troubled by dark dreams of his dead brother. Unable to make sense of them he calls for Cromwell, and his visitor manages to calm him with the right word, and the best careful gesture. More effectively so than the king’s usual aides. This is a lesson in human nature, the art of politics and the most artful ways of achieving one’s ambitions. For me, Cromwell appears to personify the first modern man in a dark and still primitive age. Classless, forward thinking, wise yet not as cunning as sometimes portrayed by historians or authors. Foremost, above and beyond the dark mentality of the public burnings; spritually and even morally evolved – where his father was cruel Cromwell does not repeat the same brutality on his own family.

Wolf Hall is a difficult novel to read but is worth sticking with for Mantel’s often remarkably poetic pieces of writing. I never thought I’d find myself agreeing with Michael Portillo, but he was right on last night’s Late Review when he said that the book would have benefited from some fiercer editing. At 650 pages it is a marathon read, and doesn’t even cover all of Cromwell’s life. This, I fear, will go into the second and equally lengthy volume. But I also agree with John Carey, who believes that Wolf Hall will win this year’s Booker. It’s just too much of an original and striking piece to ignore.