For a while I lapped up James Lever’s Me Cheeta, although its length ultimately reveals its limitations. As a short story it would have been marvellous. Something found by chance in The New Yorker or Granta perhaps, or part of a collection by the obviously highly imaginitive Lever. But novel-sized a definite no. 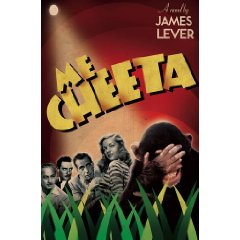 Now in his late 70s and in retirement as he spends his days mostly painting, Cheeta looks back on his former career which reached its height during the Tarzan films of the 1930s. He begins by recounting a hilarious encounter with Rex Harrison during filming of the ill-fated Dr Dollittle in 1967. The book appears to be taking an immediate and satisfying shape; Lever is witty and the conceit of the monkey narrator well executed. Things however take a frustrating turn, where Cheeta goes back to his jungle roots and appears to take a very long and meandering time to reach a proper narrative. These early chapters struck me as padding, perhaps an attempt to expand a much slighter work.

Me Cheeta is best when looking at the Tarzan/ape dynamic, and when Cheeta meets the elderly and dying Johnny Weissmuller it’s a surprisingly moving chapter. There’s also a very witty account of Charlie Chaplin, although it appears out of sorts with the rest of the book. Elsewhere Lever shows flashes of brilliance, for example Cheeta reaching the States and running wild in a movie theatre showing King Kong (the resulting chaos means he misses the end of the film and he wrongly assumes that Kong’s ascent of the Empire State Building was a wise move). There’s also a grand joke that runs with the well worn theme of giving enough monkeys enough time and typewriters (as the myth goes, one of them will eventually produce the complete works of Shakespeare).

However, I’m perplexed as to why this book has received such praise. The joke wears a little thin after a while, and I was itching for some human company.