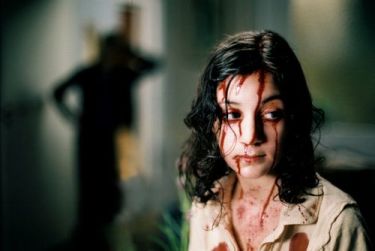 What does a filmmaker with a thirst for the vampire movie do when audiences are dulled by the Twilight franchise?

Tomas Alfredson’s Let the Right One In provides an answer. This is a beautifully shot and thoughtful film that is part coming of age love story and part horror movie. The Swedish director takes aspects of the vampire legend and moves them to early 1980s Stockholm, where tower apartments are eerily lit by bright, white, virgin snow.

Oskar (Kåre Hedebrant) is a sensitive twelve-year old boy tormented by his peers who befriends the unarguably odd Eli (Lina Leandersson). This is a girl who lurks around in dark corners to prey on the unsuspecting, so it’s in Oskar’s favour when the lonely lad finds some affinity with her. They form a friendship, of sorts, that appears to lead to something stronger. The most unusual of cinema’s adolescent love affairs as Eli is something quite unwordly.

Although this is essentially a horror film, and an at times unsettling one, Alfredson mainly concentrates on Oskar’s loneliness; his bullying and the seperation of his parents. Eli acts as a catalyst for Oskar to stand up against his enemies, and the story works best when exploring his journey there. And once he does arrive, the film is unambiguous as to whether he is actually any better off after sealing his fate with Eli. It’s an unusual movie, and describing it as bleak and depressing failed to set any of my friends alight with enthusiasm. I hope they don’t wait for the impending Hollywood remake, which may pointlessly turn it into another boring teen vampire movie (and they have already messed up by renaming it Let Me In). However bleak and depressing it is, Alfredson’s film certainly isn’t dull.

Let the Right One In has plenty of disturbingly effective scenes that you’d expect from a horror film. There’s the best use of cats in the genre since The Uncanny, where a flat full of the sensitive creatures take a unanimous dislike to a newly infected vampire. The film also makes a memorable and spectacular use of a swimming pool setting, where Eli proves her attachment to Oskar. Kind of. And there’s a very touching although certainly offbeat ending too. Although I admit that my taste in cinema is often odd, I found this a refreshing film. It’s challenging and consequently very rewarding. The leads were particularly superb, especially Leandersson, who just needs to learn the finer points of napkin etiquette.

Incidentally this is based on the 1994 novel by John Ajvide Lindqvist, which in turn took part of its inspiration from a 1988 Morrissey song Let the Right One Slip In. Those immersed in vampire folklore will be aware that the undead cannot enter your home until invited, although I think this is only a minor comfort. Like Oskar, we may suddenly and unexpectedly meet our own Eli.