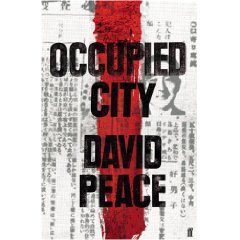 There comes a point in David Peace’s new novel Occupied City when you realise that you will never be able to mention the book without using the words repetition and staccato. These are the favourite words used to describe Peace’s writing and he does indeed go to town with his distinctive style in his latest.

Occupied City is the second part of David Peace’s Tokyo Trilogy. Set in 1948 during the third year of the US occupation, the novel begins with a man walking into a city bank and claiming to be a doctor. Sixteen employees are given a medicine that the man insists will protect them against dysentry. They are poisoned, with twelve of them dying and the murderer escaping. Peace explores his familiar themes of cover up and false accusations, with twelve distinct chapters exploring the Teikoku Bank Massacre where a man was (possibly wrongly) convicted of the crime.

Similar to his Red Riding quartet, Peace weaves his highly individual prose with real life events, and like the earlier novels this is challenging work. Perhaps even more so, and it is hard to imagine him finding many new supporters with this book. It is his least accessible of novels, at times almost completely inpenetrable. Occupied City does brilliantly evoke the atmosphere of how post-war Tokyo lived and breathed and Peace, as ever, proves himself a highly individual voice. But at times I couldn’t help thinking that he is beginning to alienate himself from his audience. Literature really shouldn’t be this hard.