The latest instalment in the Harry Potter series is the best so far. It’s a film of great quality, lovingly made by director David Yates and featuring the level of excellence that you would expect in acting, script and, most impressively, set design. As usual, the familiar cast return, and whilst regulars Michael Gambon, Alan Rickman and Maggie Smith appear only to have gained a wrinkle or two, youngsters Radcliffe, Grint, Watson and all their Hogwarts classmates have indeed – as us oldies are want to remark – shot up. The cast also gains a brilliant addition in the great Jim Broadbent, outstanding as the doddery yet potentially dangerous Professor Slughorn. 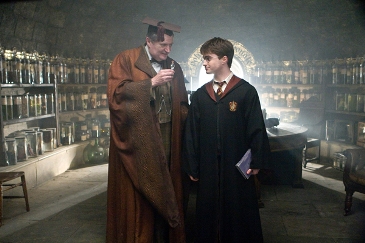 At two and a half hours, Harry Potter and the Half-Blood Prince takes its time to unfold, and whilst the more talky sections may give the younger viewer reason to fidget, I found the gentle progression of the film most welcome. Following a great visual opening scene it soon settles into the character development of our three leads. Easily outgrowing their Hogwarts gowns (there’s a scene where Harry and Ron in their pyjamea doesn’t really wash), they are seen busy discovering their emotions and hormones; Ron is pursued by the dopey Lavender Brown whilst Harry begins to fall for Ginny. Hermione, of course, begins to develop feelings for Ron. It’s all handled very well, and with great humour, although again possibly of little interest to the younger fan.

What’s best though is the wonderful visual sweep of the film, where it remains something quite beautiful to look at from beginning to end. Fred and George’s dream come true of an amazing joke shop, the inevitable game of Quidditch, Harry’s journeys into the pensieve, Slughorn’s classroom of strange vials and potions, the Weasley home of many strange angles – all are brilliantly constructed scenes. The Half-Blood Prince is made with care and is forever intricate, a film full of deliberate and satisfying detail.

The actors, and especially Broadbent, shine more here than ever before. Thankfully we lose the irritating Durlsey scenes, and many quality actors, for example Timothy Spall and David Thewlis, are reduced to little more than glorified cameos. But again, in a film of such quality, a blink-and-you’ll-miss-it appearance of Timothy Spall can be afforded. If I have one criticism it is that Michael Gambon doesn’t quite hit the spot for me as Dumbledore. There’s a hint of Irish in his voice, possibly a nod to the late Richard Harris, and it’s a shame that Harris didn’t live on to continue his run as Albus, as I found him superb in the earlier outings.

But what of the plot? Unlike most Potters, which tend to build up to the return of Voldemort in some shape or form (most memorably personified by Ralph Fiennes), this chapter falls back to the early life of the Dark Lord. I always found the novels frustrating in that, over seven increasingly longer volumes, they didn’t reveal nearly enough about him. This film is equally teasing, and non-Potter fans will no doubt comment that it’s inconsequential. But a counter argument is that it’s a different kind of cinema, a series of interlinked films that defy idly dipping in and out of. The ending, just like the book, is particularly downbeat. Don’t expect to come away with all of the answers.

Harry Potter and the Half-Blood Prince is a 12A, a certificate I would agree with as my ten year old daughter did find some of the scenes quite terrifying. In particular, where Harry and Dumbledore cross a dark cavernous lake to begin the quest for Voldermort’s horcruxes. It made me, and the strapping bloke in the seat behind me, jump for our lives.

So I have come away from the latest Harry Potter loving it because, in many ways, it has become – like Doctor Who – something almost beyond too much criticism. Skilfully made, enjoyable, popular culture. And if I compare this to the films made for children in the 70s there is no comparison. It certainly sets the standard very high.