Next to The Weakest Link, Who Wants to be a Millionaire is probably the most recognisable of game shows, although I’d never have put money on using the familiarity of either of them for the basis of a film. Danny Boyle’s Slumdog Millionaire cleverly weaves a story into the Who Wants to be a Millionaire format and shifts the setting to India. Here a teenager from the slums of Mumbai takes part in the game show, proceeds to the highest level of the contest and is arrested under suspicion of cheating. During interrogation we learn how he knew all of the answers, which unfolds as the result of a combination of personal tragedy and sheer luck.

Slumdog Millionaire has received some criticism for an unrealistic depiction of Indian poverty, and the film certainly contains many of Danny Boyle’s mannerisms. He’s a brilliant visual director but is sometimes lazy with characterisation, and his adrenalin fuelled style of direction can often be tiring. He isn’t a naturalistic film maker, and if his portrait of India is wrong, I wouldn’t think it was any more wrong than the world of Edinburgh drug addicts he presented in Trainspotting. For me, his most convincing film to date is 28 Days Later, a zombie movie.

Nevertheless, Danny Boyle is a director who knows how to engage his audience, possibly more than any other to emerge from the British Isles in the last twenty years. Slumdog Millionaire is being hailed as the feelgood movie of the decade, an oft used tagline that does for once ring true. And Boyle manages to add a little more substance to his feelgood factor, this film is at times uncomfortable and gruesome. Realistic or not, it does show a horrible world from which the audience desperately want its hero to escape from. And this is what makes good cinema. 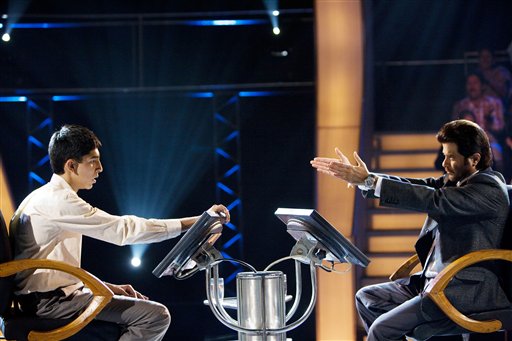 It’s difficult to give away any more a plot than I have already without spoiling the film. In custody, Jamal (Dev Patel) is roughed up by the police but does not confess himself to be a cheat. Having calmed down a little, the sweaty cops play a video of the Millionaire show, setting up the flow of the film which switches between the settings of interrogation room, last night’s quiz show and Jamal’s life. Jamal, his brother Salim and their friend Latika are each played by three different actors as they whizz through childhood to early adulthood. It’s a device that works well visually, although apart from Patel as Jamil I found there was little time to really get to grips with any of them beyond broad sketches. Indeed, the best actor in the film is Anil Kapoor as the smarmy game show host Prem Kumar, a nasty glint in his eye behind the affable exterior, much more Anne Robinson that Chris Tarrant.

Boyle plays with the Millionaire format very well, the ask the audience and the 50/50 choices played as skilfully as they should be in the game itself; we await the phone a friend segment hoping that it will form a memorable part of the climax to the story – Doyle doesn’t disappoint. Whilst reaction to the fairytale ending may be divided (depending on your definition of feelgood) I found the stories behind the Q and As of the game show clever and absorbing, and the scene in the washroom with Jamal and Kumar so simply effective it’s become one of my favourite scenes in recent cinema. Although not perhaps the ten out of ten I’d been led to believe, Slumdog Millionaire is certainly a good nine. And that’s my final answer.

I’ve been meaning to see this, but I’ve been dragging my heels, too. Maybe it’s the subject matter. Do you remember that Ralph Feinnes film about cheating in the ’50’s? I thought that one was really good.

Yeah, this is on my “should probably go and see at some point” list too. Although I’ve seen the book in waterstones, and I’m tempted to go down that route instead…

Chartroose: was it called Quiz Show? I feel a meme emerging here. Films based on game shows. The only other that springs to mind is Starter for Ten with James McAvoy, about University Challenge.

Jack: could be a good route. I’d be interested in how the book dealt with the subject before Danny boy got his hands on it.

Steve – have just finished reading the book. Review online in next couple of days.