Two years ago, my very first film review here was for Casino Royale, and I mused that Daniel Craig could possibly equal, if not supplant, Sean Connery as the best incarnation of James Bond. After seeing Quantum of Solace I’m still of my 2006 opinion. Craig is still very much the number two Bond almost ready to push aside Connery’s one, which is an unusual stance to take considering that the 22nd Bond film is generally very disappointing. 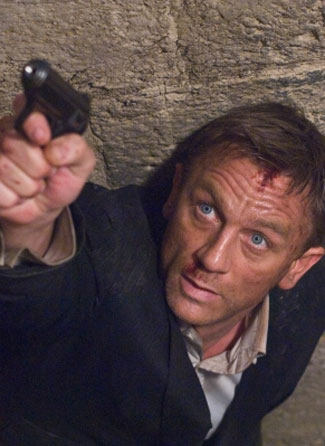 What I found a huge mistake was that Quantum of Solace follows directly on from its predecessor Casino Royale, the two movies effectively making one whole. So if you’ve not seen the previous film in the last 24 hours you’re stuck, and I don’t think I’m a rare example of having an only hazy memory of the last film. If I wasn’t so shy, I would have stood up, called the rest of my fellow audience aside and said “right – that’s Bond up there and Judi Dench is M. Other than that I have no idea of who these other characters are who they keep referring to. Do you?”

If Craig and Dench are my only terms of reference, I found the Judi Dench presence in this movie somewhat stifling. As M should really only be an incidental character, she’s given too much prominence in the role. M should never really threaten to overshadow Bond, and where Dame Judi should only be giving a cameo she has almost as much screen time as Craig. Dench is everywhere, turning up in hotel rooms, lobbys and lifts, even London East End tower blocks so she can berate our hero in her school mam way. I half expected Craig to open the fridge door at breakfast time to find Dench sitting beside the milk cartons, looking down her nose and muttering try not to make the tea too strong this time, Bond.

So picking up from where Casino Royale left off, Quantum of Solace finds Bond still in a state of unrest following the death of love interest Vesper Lynd. The man who he corners at the end of Royale is dragged in for questioning at the beginning of Solace, and the film begins with an impressive car chase (that would have been more impressive if I hadn’t already seen it on a recent South Bank Show). Just when we think we’re sitting down to some comfortable Bond chat there’s another chase sequence, which echoes the opening of Royale for speed and physicality. Here Bond chases a double agent across Italian roofs and ascending (and rapidly descending) a bell tower. It’s very well done, although looking back I think that director Marc Forster played all of his best cards far too early as what follows falls far from expectation.

Daniel Craig continues to excel in the role, which makes it all the more tragic that this film is so messy. He’s totally convincing as a man who, if you pick a fight with him then you’re going to lose. If he asks you a question then it’s best to respond clearly and loudly. If he’s sent to kill you then you’re going to die. Craig portrays the ruthless and competent assassin perfectly, best shown where he swiftly disposes of a man in a Haiti hotel room. This is a scene that stretches right back to Connery’s fight with Robert Shaw on the train in From Russia With Love and proving that we still don’t need gadgetry and special effects, just a well coreographed punch up. The only thing that spoilt it for me was the cynical product placement. No, I still don’t want an Omega watch.

The makers of this film have claimed that they wanted to dispense with the cartoonish Bond villains of old. Gone are the white cats, metal hands and teeth, and in their place, at least as the film sketches out at the beginning, is the allusion to the modern threat of terrorism, that anyone, however apparently benign, could be a menace – as M grows increasingly concerned that the enemy is buried within her ranks, ready to turn on her when given the signal. There is a watered down villain, and in this villainous role Mathieu Amalric makes the most of what he is given, but it’s obvious that he wants to be a classic Bond baddie, snarl, utter memorable lines and stroke an albino moggie. Small and weedy, he comes across as a greasier and nastier Roman Polanski, which is odd as buried in the mad plot of this film is a distant echo from Chinatown‘s theme of heat and drought. But, like the other themes in this movie, it isn’t explored thoroughly.

It’s the plot that ultimately ruins Quantum of Solace, both for the big headed belief that an audience will come with Casino Royale fresh in their minds and for the fact that, for a film that wants to be ground breaking, the storyline is hackneyed and unoriginal. And the stupid title. Seems to be that they only pick titles with a pair of words with o s – Casin o, R o yale, o f and bloody s o lace. Then they can string the two o s together in the title sequence to make 007. So you could equally call it Quantum of Booze or Expresso Bongo. Or Bored by Bond. At least the theme tune, written by Jack White, is very good – even though it uses a few token John Barry references. I still have high hopes for Bond, but Craig’s next outing requires a fresh story and a lot less Dench.

Judi Dench is everywhere, and not just in this movie. I’m going to skip this because I have trouble viewing a blond Bond, and also because you’ve convinced me to stay away!

Somebody at work was saying that they didn’t like this film because it was lacking the things they liked in a Bond movie – good villains, Bond girls and gadgets. So, if you agree with this or not, the producers appear to have lost the core viewer requirements.