A little old lady from Wigan or Hull wrote to the Daily Mirror asking if they could put Yoko and myself on the front page more often. She said she hadn’t laughed so much in ages. That’s great! That’s what we wanted. I mean, it’s a funny world when two people going to bed on their honeymoon can make the front pages in all the papers for a week. I wouldn’t mind dying as the world’s clown. I’m not looking for epitaphs.

Looking at another hefty chunk of Philip Norman’s John Lennon: A Life, roughly covering 1963-9 – the period which started with the Beatles becoming seriously big, their conquest of Britain and the US and the beginning of their prolific run of brilliant albums, and ended with things going seriously sour, petty and bitter fallings out – the at times acrimonious break up of the band. 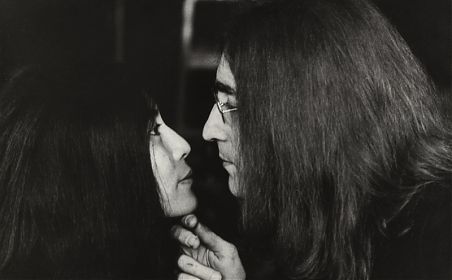 Norman continues in his usual self-appointed role of historian, carefully setting out the facts of Lennon’s life and avoiding any temptation to fancy or judgement. As the book continues however, he is unable to resist injecting into proceedings his benefit of hindsight. He’s very quick to find prophecy in spur of the moment quotes, for example Yoko Ono fearing that she would one day end up alone in a New York apartment, and subtle turning points in Lennon’s life. With his relationship with Paul McCartney, 1968 is ruefully labelled “the last year they would be friends”, and of the brief reconciliation between Lennon and his father, “the spell was broken, never to be recaptured”. And at times Norman takes this theme a little too far, finding the song Happiness is a Warm Gun too painful to listen to for its obvious connotations, and constantly nudging us with the fact that – in a few more chapters – Lennon will die.

But despite my nit-picking, I continue to find this a mostly excellent biography. And despite how many Beatle books I’ve read over the years, it is still incredible to believe just how much happened between 1963 and 1969. Putting the output aside, albums and singles in double figures, the films and endless tours (not to mention two books by John as a published author), there is the breathtaking speed of events in Lennon’s own personal life. His increasingly dull married life in rich and comfy Weybridge, controversy in 1966 with the Beatles fleeing the Philippines after seriously p-ing off Imelda Marcos, more trouble in the same year with the “bigger than Jesus” debacle, drugs, more drugs and lots of drugs, the death of Brian Epstein and the Beatles flirtation with the Maharishi. If all these events weren’t enough, Norman spends more time than any on Lennon’s meeting with Yoko Ono…

As biographers go, Norman is extremely kind to Yoko Ono. This is possibly because she contributed to his research for the book, so it’s odd that she eventually withdrew her support claiming that Norman had been “mean to John”. Finishing the story (in the third and final posting) may reveal her reasons why. But Norman gives the best account of their meeting and early relationship that I’ve ever read, revealing it as far more complex than Lennon made out in his later years, when he tended to look back on their courtship with rose-tinted little round glasses.

Factually, Norman has really done his homework here, and I forgive him for misquoting a song lyric or two (In I’m So Tired, Sir Walter Raleigh is a stupid get, not git) and describing the Magical Mystery Tour soundtrack as the “accompanying album … selling … five hundred thousand in Britain”. It was a double EP set in this country, Philip, the album came later. Sorry to be pedantic, but you’re getting paid for this mate.

I find myself continuing to read Lennon biographies as I face the prospect of outliving the man for two reasons. They’re both obvious. One is to gain some insight into the creative process of the Beatles, but as this is something that’s been done so well by Ian Macdonald in Revolution in the Head Norman doesn’t attempt to try too hard on this part. His accounts of Revolver through to Sgt Pepper and The White Album – three of the best albums ever made – are sadly pedestrian. Secondly, I just want to find out what Lennon was really like, especially as the memory I had of him (brief though it was) has faded. Norman does this very well, and there are many well constructed memories and accounts of his peculiar yet (mostly) charming personality. So far, he’s not been mean to John.